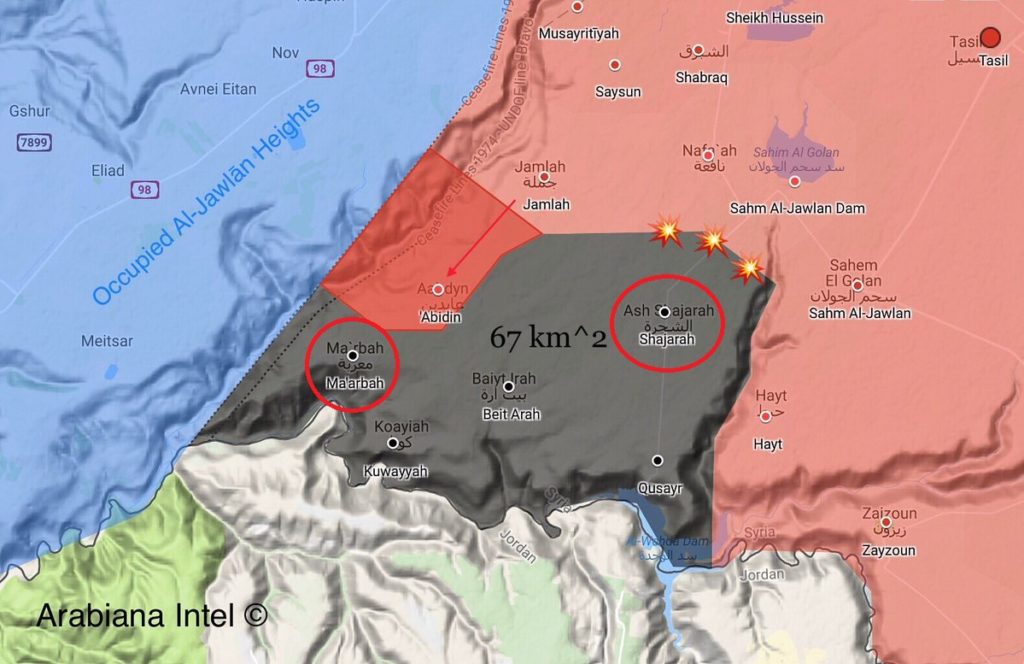 Following the liberation of Shajarah and Abidin, units of the Syrian Arab Army, the Tiger Forces and the 4th Armoured Division continued advanced further on ISIS positions east of the Golan Heights thus liberating the village of Maarbah from the terrorist group.

According to some sources, there are less than 200 ISIS members in the remaining villages under control of the terrorist group.

However, according to security experts, some number of ISIS fighters may have remained in the towns and settlements, which are now formally in the hands of pro-government forces.

The same problem is observed in eastern al-Suwayda where ISIS cells are still actively operating in the alleged government-held area.

SO…. they cutting them off from golan escape route.

yes they done it. I hope they take no prisoners.

Yes, their summer cottages are in Israel. Jordan doesn’t have oceanfront views.

I set up Viber and sent you an email.

Israel, ISIS and Al-Qaeda terrorists are US and UK army. Their trade names are interchangeable.

well not exactly they closing the escape towards the Golan but the Jordan escape route is still open, for the scum to go vacations to Jordan, if the jordanians let them and dont shot them as they crossing.

Well they said that they didn’t want their Headchoppers back…or did they change their mind?

They have burned alive a jordanian pilot.

No, not yet, take back the Golan while you have the momentum. The [pathetic IDF are a bunch of LGBQT’s, exchange students from the U.S., and criminal Russian Jews. They stand no chance.

And im sure the IRGC has something in store for the Israeli air force.

Uh, no, they’re just as homo-/allophobic as you are.

You have a lot to learn about military operations. Taking on badly trained IS fighters is nothing like fighting one of the best organised and trained fighting forces in the world. Try readings some things about Auftragstaktik and the advantages of a decentralised command structure, as well as the vital importance of leader selection methods. The IDF is still one of the most dangerous military forces out there, because they undertake such sound methods, regardless of the behaviour of their government.

The ISIS pocket about gone but their threats still exist. SAA and allies need to completely wipe out them….

The occupied Golan Heights are teeming with Isis after all that’s where they came from.

The ISIS commander in Shajarah, now already in the company of Satan, was an egiptian.

Easily sorted. Give them a thousand dollars a day to fight for Syria and then watch what happens.

And the Golan will be the next battlefield. The Syrian Arab Army, NDF, Hezbollah and also include the Iraqi PMU’s into the mix. They have the momentum, and vast, enviable experience fighting for 7 years in desert, rural and urban environments, against a fanatical enemy determined to be martyred.

The pathetic IDF wouldn’t know what hit them, they would collapse, and perhaps be surrounded altogether.

And the Syrian Army needs just a few attacks originating from the Golan to use as a causes belli , an excuse to go in there and take back their land.

The IRGC will be co-ordinating the offensive, and IRGC GEN. Solemenei is the grand strategist. And he answers exclusively to Mr. Khamenei. All this requires a little more patience, as the right pieces are being put into play. Then the trap will be sprung. And the U.S., which thinks it will be immune when hell breaks out, will be sorely mistaken. The Iraqi PMU’s, Iraqi Hezbollah are right there, outside Al-Tanf, awaiting orders, and these guys have no love for Americans, as the U.S. Air Force bombed a position of theirs, killing dozens. The PMU’s, who can number in the hundreds of thousands, and can draw from the population of Iraq, number in the several hundreds of thousands. And they are in position. The U.S. State Dept had issued a statement earlier declaring the head of the PMO’s and auxiliaries as a terrorist, on the U,S, terrorist list, in other words he’s fair game for a drone strike. So how do you think the PMU’s are taking this arrogance?

As for the Israeli Airforce, and maybe U.S., British and French air forces, they will not be able to achieve much, as we saw in 2006, when the Israeli air force had complete air superiority, they were ineffective except to terrorize the civilians of south Beirut.

The forces of the axis of resistance are fully mobilized, highly mobile, small units acting as one, not the Soviet military doctrine we saw in 67′ and 73′.

Daesh cuzins can’t go through Israel anymore. Jordan’s their last shot! once that’s blocked off, There’s no way out!

they better hurry up then.

Soon the real battle for Syria’s survival begins. To face off with the Army of Mordor, the Jews hiding up in the Syrian-Golan. The battle will be win or loose for humanity. I wish the White Knights well in their uphill struggle against overwhelming odds. https://store.americanvision.org/products/christian-life-and-character-of-the-civil-institutions-of-the-united-states

that be around this time next year. So dont hold your breath.

Yep Israhell is providing a safe haven for these terrorists which is part of IDF./Mossad

Head headchopper: oh great leader of the enslaved world, we beseech you to allow your children to return home.

NetanYahoo: why that sounds like fun, ahem cough cough, I mean that’s terrible. But nothing I can do, the return policy expiry date has passed. Now buzz off.

HH: but we were created by you, is there no love in your heart for your children?

NetanYahoo: (sounding confused) Heart… what’s that? Never mind. Now in answer to your pathetic pleadings, you faces so ugly not even a mother could love. Good bye.

HH: calls up Jordan – this is head headchopper and we need a place to hide. Can you help us?

Jordanian Receptionist in a bored and yet callous tone of voice: I am sorry, you have the wrong department, returns are handled by Israel only, I will transfer you…

HH: NO WAIT! – it is to late and the call is transferred and the headchopper is promptly put on hold

Thank you for holding, all our operators are busy with important people, but we still pretend your call is important to us and so please remain on the line so we can make you wait and wait until finally disconnecting you…

stop this nonsense bullshit talk of liberation of occupied golan heights….idiots, read between the lines… a deal was made between russian(syria/iran/hezbollah) and israel……occupied golan heights are not to be touched…..that is the deal under which the fighting began in Daraa and Quinetra area.

Be happy that putin saved us ALL.Cause in world war 3 the most devastated areas will be europe and north america.

Yes! Call everyone reading your posts a stupid phuqqtard. That will persuade them of your good intentions!

Good to see Russian-backed forces advance. Remains to be seen how far the Putin-Netanyahu entente lets them go…