On February 26, the Syrian Arab Army (SAA) continued its advance in the heart of southern Idlib, securing two new towns.

According to pro-government forces, the army captured the two towns, Fatterah and Milaja, following heavy clashes with al-Qaeda-affiliated Hay’at Tahrir al-Sham (HTS) and its Turkish-backed allies.

Fatterah and Milaja are located in the Shashabo mount. The mountainous region overlooks most of the remaining militants’ positions in southern Idlib, as well as the al-Ghab Plain in northwestern Hama. 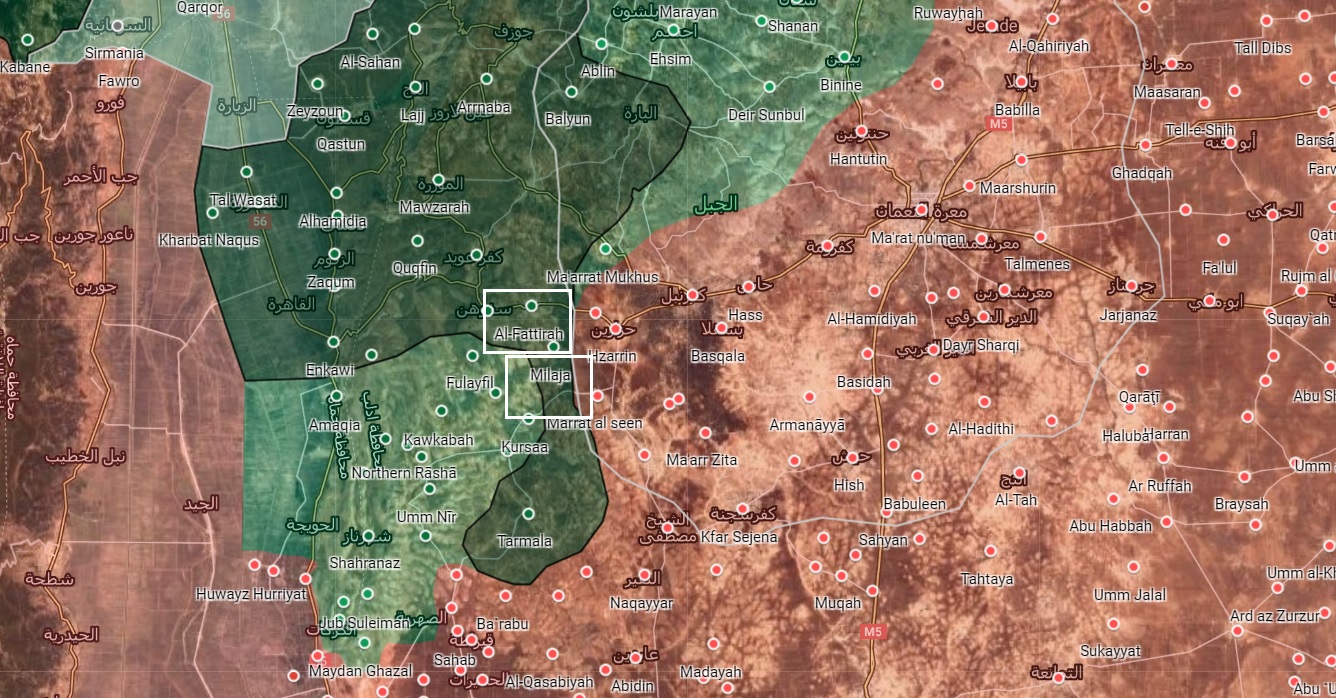 In the last 48 hours, the army liberated dozens of towns and villages in southern Idlib, including Kafr Nubul, a known stronghold of Turkish-backed militants.

The Turkish military is not providing the militants in the Shashabo mount with any serious support. In spite of this, a convoy of Turkish forces was struck by the SAA while moving near the region.

The SAA’s rapid advance in southern Idlib will likely continue in the upcoming few hours. The remaining positions of HTS and its allies there could collapse soon.

saraqib is at a huge risk, the hts scum just captured salhiya and afis and just about an hour ago they cut the M5 Highway !! seriously wtf are we doing here are the saa fighting or playing ping pong … allies need to bring the big guns bring hezbollah back to the front and carpet bomb the saraqib area, burn every turk in idlib none of the southern pocket sh*t matters if we lose sara9ib ffs !! and please no one say to me tactical retreat nayrab should’ve been recaptured the next day!! ….i honestly don’t get how they managed to cut the m5 with no air support SAA WAKE TF UP !!

SAA is gambling on defenses in Saraqib being able to hold out long enough for the southern salient to be completely wiped out. By the look of things, if Al Qaida doesn’t reinforce it ASAP, taking the forces off Saraqib axes – an loses the fight in the process, SAA will clean up in a day or two and then strike north to relieve Saraqib. It’s a gamble but let’s hope that the Russians and Syrians have calculated the odds correctly…

i don’t know if its gonna take 2 or 3 days to clear the southern pocket ….the m5 in the other hand needs to be restored asap and all the focus should now be on saraqib

I would think that Smerch long range rocket artillery will be used to smash the jihadi attacks in the same way they smashed ISIS.

Russian aircraft are now bombing Jihadi’s in the area after Syria aircraft were attacked by Manpads.

I love those pincer movements they do – bang, wallop, shoot the vermin dead.

Saraqib is lost and the M5 highway is now split in two, and the Turks and their pet murderers are kicking our butts with ease, but no one saw it coming, I wonder why not, it’s not like it wasn’t obvious what was really going to happen. If you’re choking on what you’re seeing now look away quickly, you’re not going like what happens next at all. WHO’S FUCKING IDEA WAS IT TO GO TO ALEPPO, TELL US ASSAD, was it Russia, Iran, or your idea, who was the one who destroyed any chance we had of succeeding, who stupidly fell into Erdogan’s clever trap. Arab League peacekeepers are needed now Assad, if you don’t ask for them and deploy them now you’ll possibly lose everything you’ve just gained and more, the dream is finally over and you’ve lost, salvage what you can and save who you can. Listen all you retards, the UN, US, Israel, EU, and the Arab League, have all been saying Assad can remain in power for the last 18 months, but soon it’ll only be Israel and the Arab League saying Assad can remain in power, Assad’s about to lose all the others, soon we’ll start hearing “Assad has to go” again. The UN is already talking about extending the 6 month deadline for ending humanitarian support, which means they no longer think the war will be over on less than 6 months, before we hit the heavily populated areas of western Aleppo they did, the UN was on our side for a change, now they won’t be though. The Russians and Chinese made an excellent deal with the UN to get them to agree to ending humanitarian aid for the rebels, and what did we do, we jumped the gun because we couldn’t wait just 6 months more, but by jumping the gun it now means we’re disqualified from the official race, there are no political points when we finish the race now no matter where we place, win lose or come second, only Erdogan gets political points now, F-CKKKKKKKKK. Thanks China you did your best and we all appreciate your help, but sadly some retard on our own side wanted to throw a spanner in the works and ruin everything, hopefully you’ll get to the bottom of it and find out who it was, and then make them suffer for it, and about 50 bill worth of suffering should do the trick. And I think I know which party it was, who has the most to gain from this, the Russians, the Syrians, or the Iranians, who would be the most happy if the conflict in Syria would never end, we all know the bastards on the other side don’t mind the war going on and on, but who on our own side would also be happy if things continue exactly the way they are. I’m going to be paying close attention to how the Chinese deal with Iran from now on, will their current diplomatic relationship status change in the coming weeks and months, will it improve, stay the same, or possibly even sour, whatever happens it will be a sign of who is actually guilty of throwing a spanner into our machine, our marvelous well oiled machine that’s been purring away nicely for the last 18 months.

You support the moderate head choppers, troll all day long for them.

I support sane thought, not LGBTQI fantasy, you’re ego may be telling you Assad’s invincible but that’s simply not the case, so he should be getting help from anyone he can to stop the Turks taking over even more territory if they try. And since the Arab League have already offered peacekeepers for the job, what’s wrong with putting them in a de escalation zone if that’s what we have to do to save ourselves, if we don’t need them in the end we can just send them home. The Turks will attack the Syrians and no one will stop them kicking the SAA’s butts if Russia can’t or won’t intervene, but if the Turks attack AL peacekeepers that are enforcing a UN mandate, everyone will complain and also possible help, and yes I do mean the Saudi’s too dumb fag. The Russians won’t start WW3 to save Assad, but Erdogan will start WW3 to save himself.

Now it’s 38 messages and heaps of dislikes over the last few day, you certainly have a lot of spare time on your hands don’t you, and all of them saying you slept with my wife, LOL, I didn’t think homosexual men slept with women at all, that means you must be a lesbian, bend over bitch. :]

The Arab League? Led by the Saudis, you would love that.

Like the OAS, or the Coalition of the Willing!

Syria will be responsible for Syrian affairs, with help from Russia, Iran and Hezbollah.

Led by the Egyptians dick licker. And who’s going to buy the Iranians oil if the Iranians are fighting the Turks, half their export revenue would disappear instantly if the Turks stopped buying it, China buys the other half, will they start paying double price, you can’t fight a war without money, dumb fag. My God, it’s over 50 messages and heaps of dislikes over the last few day, you certainly have a lot of spare time on your hands don’t you, and all of them saying you slept with my wife, LOL, I didn’t think homosexual men slept with women at all, that means you must be a lesbian, so bend over bitch. :]

Shut up you jihadi loser.

Syria has defeated your heroes, but you want to replace them with Muslim Brotherhood, as they are really moderate!

You retard, I’m probably the loudest voice on SF condemning the Muslim Brotherhood and Erdogan, that’s why I want Arab League peacekeepers in Syria, Arab League peacekeepers and the Muslim Brotherhood are mortal enemies, you are totally ignorant of even the most common facts aren’t you, go back to those LGBTQI magazines, they aren’t too complicated for you.

More than 55 messages and heaps of dislikes over the last few day, you certainly have a lot of spare time on your hands don’t you, and all of them saying you slept with my wife, LOL, I didn’t think homosexual men slept with women at all, that means you must be a lesbian, bend over bitch. :] And get some help for your weird compulsive disorder, you’re starting to frighten me, LOL.

You love foreign troops in Syria, as you often say.

Moderates you call them.

You’re just like RichardD, you make up BS about peoples comment that aren’t true, wtf are you on you complete poof, you’re as big a troll as he is, or are you RichardD using another alt ?

More than 64 messages and heaps of dislikes over the last few day, you certainly have a lot of spare time on your hands don’t you, and all of them saying you slept with my wife, LOL, I didn’t think homosexual men slept with women at all, that means you must be a lesbian, bend over bitch. :] And get some help for your weird compulsive disorder, you’re really starting to frighten me, LOL.