On July 29, the Syrian Arab Army (SAA) continued its advance in northern Hama, recapturing the key village of Jibeen from Hay’at Tahrir al-Sham (HTS) and its allies.

Pro-government sources said that SAA units stormed Jibeen in the early hours of the morning. Following few hours of clashes, the army was able to fully secure the town. 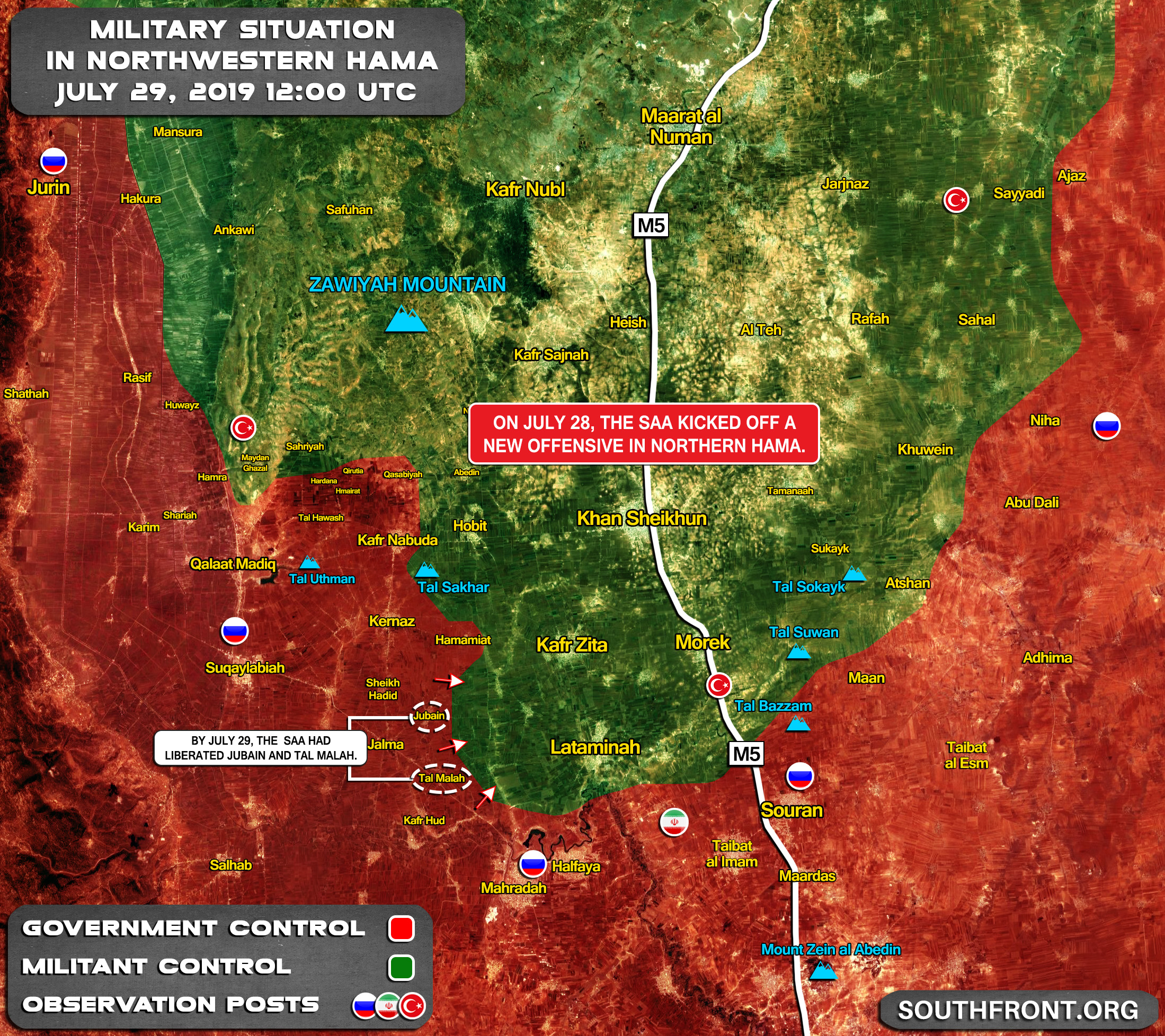 According to initial reports, HTS and its allies of Turkish-backed and al-Qaeda-affiliate factions suffered from heavy losses during the clashes in Jibeen and Tell Meleh. However, details are still not available.

Russian and Syrian warplanes are currently pounding militant’s positions in towns of al-Lataminah and Kafr Zita. The SAA could develop its operation in the upcoming few hours and storm the two towns. Such a step would be a major blow to HTS and its allies.

You are making good headway no matter what some say.

bravo bravo…. gain Momentum and dont ever again give your ok to any bullshit ceasefire Agreements between Russia and Turkey. should Turkey openly engage in the fight, attack them viciously and send them back to their Sultan erdogan in boxes

BEIRUT, LEBANON (12:10 P.M.) – Minutes ago, the Syrian Arab Army began targeting the Turkish military’s observation post area in the northwestern countryside of the Hama Governorate. According to a military source in the Hama Governorate, the Syrian Arab Army fired several rounds from their 57mm guns, along with mortar shells, on the Turkish military’s observation post in the town of Sheir Magher.

No casualties have been reported by either side. Today’s attack on Sheir Magher marks the first time since early July that the Syrian Army has targeted the Turkish military’s observation post area.

K88k??BLQ
Reply to  klove and light

It is important that the syrians win without help of Iran and Hezbollah, so the nazist of Sion has no excuse for its crimes against them.

Syrians will win, and we will stand with syrians until the end!

Slight problem there that the forces of Sion attack with excuse or without. Sometimes they don’t claim responsibility for their attacks, in which case the issue of excuses is moot. So far, nobody on the loyalist side can be bothered to deter attacks from Sion so it’s all become a bit silly. Can’t blame Hezbollah and Iran for calling it a day and retrenching to defend their home turf under those circumstances.

The ATGM footprint is smaller than tank. Therefore, ATGM are not visible. Syria can easily produce ATGMs. One pickup vehicle can easily carry several ATGMs. While tanks are expensive and are vulnerable to ATGMs.

Video of recent SAA attack on key hilltop Tel Meleh…..now they are down to serious Business…take no Prisoners kill em all.period!!!! https://youtu.be/HbGsiyTuYsY

after another artillery strike at the turkish camp they packed up and left! LOL 13 trucks heading north…if i was SAA i would pound them and say it was an accident

Al Nusra, all Turkish back wahhabis actually took control of both of these, dough with high costs in beginning of the JUNE, NOT JULY!

Nothing but to say this: Great news! Love you SAA.

thats what im talkin about SAA!!! look at what houthis are accomplishing in yemen, emulate their succcess!