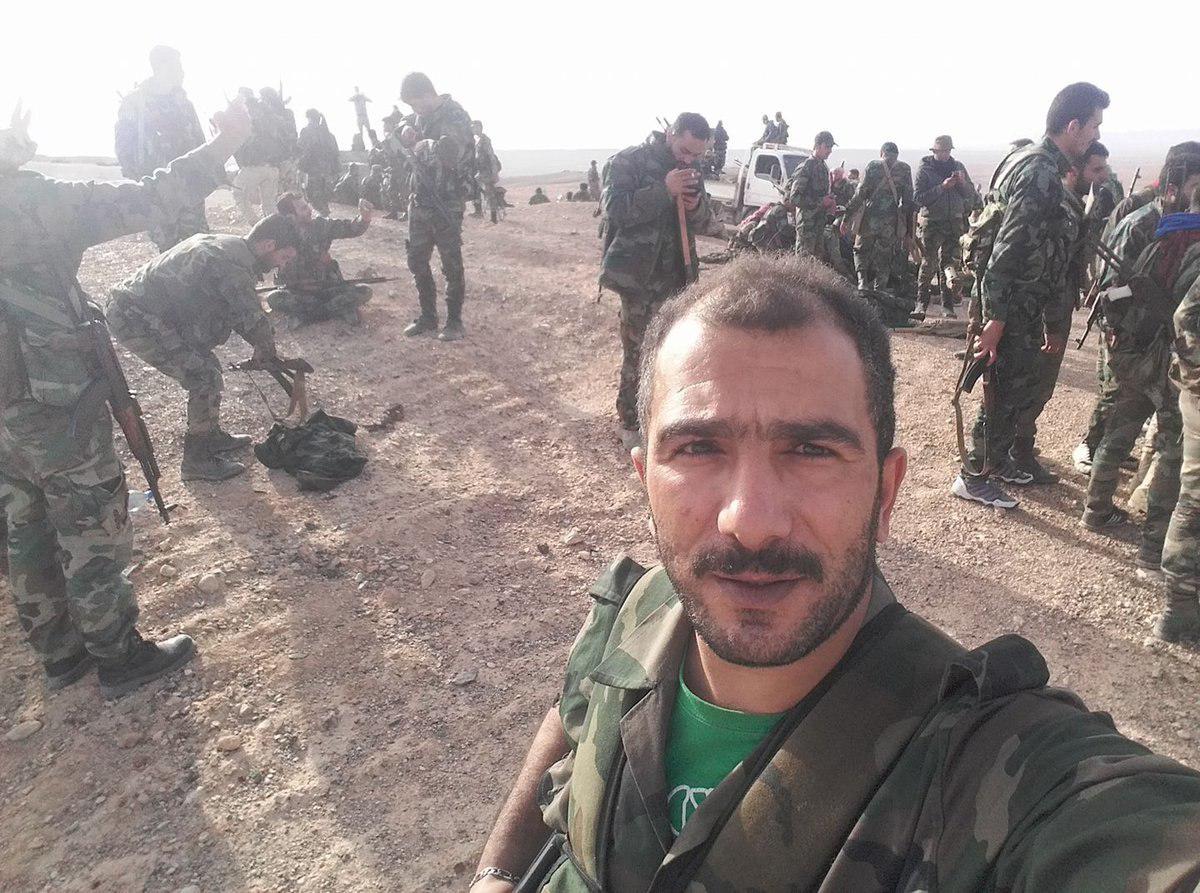 The Syrian Arab Army (SAA) has recaptured the abandoned battalion from ISIS north of the T4 airbase in the province of Homs.

The advance came after the 5th Assault Corps liberated the Al-Sha’er gas field and a range of highlands near the Al-Mahr gas field. 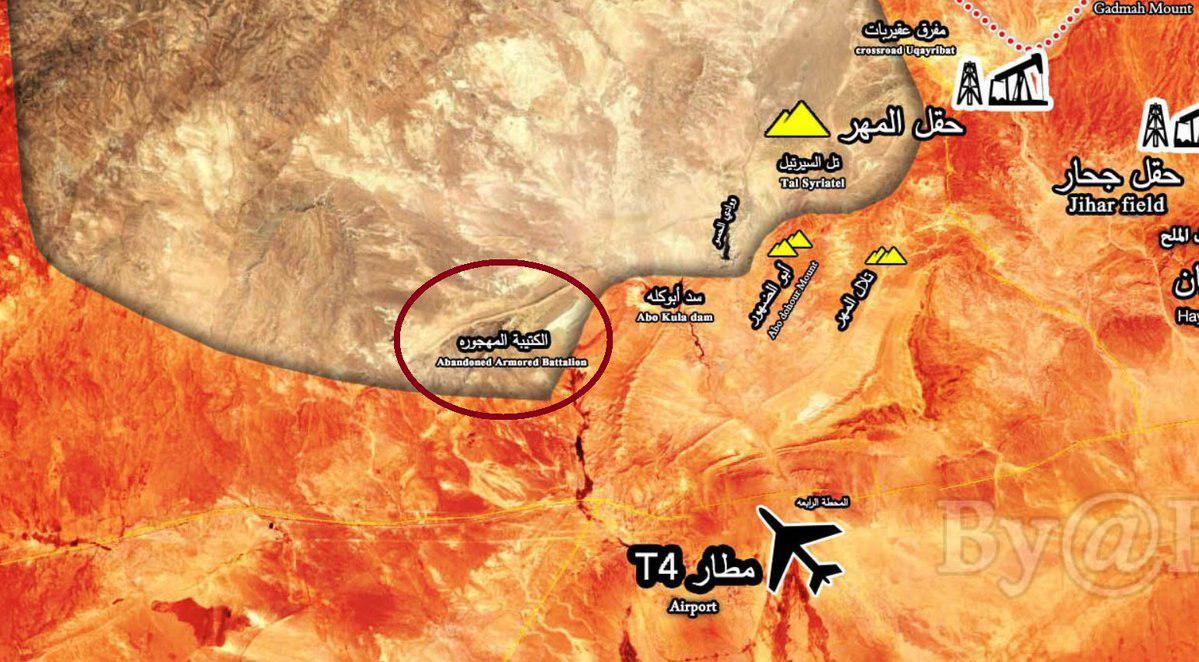 Separately, government forces repelled a large-scale ISIS attack on the Al-Sukari area southeast of Palmyra. ISIS claimed that four Syrian soldiers were killed as a result of the clashes.

ISIS had deployed some reinforcements to eastern Homs following the significant advances made by the SAA and the Free Syrian Army in the desert of Palmyra and Damascus. ISIS seeks to keep the presence in this area in order to prevent further advances of anti-ISIS forces along the Syrian-Iraqi border.

I don’t understand SAA tactics. After momentum is lost and ISIS send reinforcement and rearm, the SAA start there advances. I am not surprised so little gains and progress is slow to liberate new territories and heavy casualties by SAA

In addition, Assad should spend more money on his army. The do the best what they can ad with what they have, but Assad and his government is responsible for arming his army. If he does not sign same kind of agreement with Russia and IRAN for more advance military hardware or even basic soldering equipment. I will have to conclude, that he is nickel and dimed his military

The Syrian government is basically broke due to a struggling war economy, high unemployment which has greatly reduce income tax revenues and loss of revenues earned from exporting oil, phosphate rock, chemicals and agricultural products. Their main source of revenue is income tax followed by loans from the Iranian government. Assad knows that if he visits that well too often that it’ll go dry so makes do with what he has coming in.

They do not have enough soldiers.

That’s why they’d better not to begin new advances, having no final results at directions they’ve already got some success: East Aleppo province and North Hama province as well.

They have enough volunteers or armatures soldiers but they dont have alot of tiger forces, hezbollah that make a difference because these FSA and terrorists are well trained, equipped and funded by the arabs and westerners and have nothing to lose and move from area to area. Assad have not asked Russia or iran for ground troops as he dont want to give the westerners more excuses to intervene but if it get out of control or they intervene trust me WW3 will kick off

As a sovereign nation , Assad has every right to invite his Russian allies into his country . He has done so and Russian ground troops are in Syria . The problem as I see it , is Russia has not sent enough troops to actually win this war . They say” Power loves a Vacuum” . So the US is sorely tempted to take advantage of this “hesitation to win” by Russia .

Exactly, the numbers are too small to make a significant difference. I don’t know what Putin’s strategy is. Now would be the time to make a final push, while their is momentum. Does he fear large casualties ? That seems unlikely given complete air superiority.

At least match the protection of the Syrian Kurds in Afrin along the Turkish border , anything less , is to almost invite the US to . After the USAF took out SAA and Russians on the mountain guarding the air port at Deir Ezzor , anything less than a strong comeback is certainly questionable . You are right , now would be the time to back up the SAA momentum , and give a real push .

Manpower alone does not conclude victory, rather tactics and advanced military hardware this days

??? Since weeks they are advancing in the north and southwest of Palmyra. And when ISIS brings their last manpower in the region that is good to keep SAA under “open eyes” and training in combat.

How many Presidents in the world would have chosen to live amongst their people for over 6 years in a war that all of the West and the Gulf States have fuelled with well armed terrorists.

President Assad could have easily run away to live in luxury elsewhere.

President Assad is a true leader who loves his people and is fighting to preserve the secular state with great courage,

Very Good point, but my point was not to criticize Assad, rather advice to end the war quickly

One has to admire and respect Bashar for hanging in there since he could’ve cut and run back to London to resume his practice when the protests started becoming violent and blame the heavy-handed government response on his generals. He could’ve gotten away with that then since most governments figured that the entrenched government officials and military heads were calling most of the shots after he assumed the presidency.

Their main concern is avoiding casualties while regaining control of vital roads, cities and industries. They had to accept some while establishing buffer zones around Palmyra and now are advancing much slower for a good reason. I suspect they’re aware of ISIS withdrawing fighters from the regions west of Palmyra and the mines so decided to let them clear out first before continuing their advance. That way they can leave more units where ISIS poses a greater threat.

When have the SAA done this?

Congratulations. One achievement more of several that will come soon.

There are several T3, T4 base. Does know somebedy the key, accordint that are named these bases?

They are named after the adjacent oil pumping stations. The “T” stands for Tripoli. See http://wondersofworldengineering.com/oilroute.html

I figured the T stood for terminal since a pipeline that gathered oil from collection lines at oil fields further away would end at the pumping station to be sent away to the refineries and export terminals.

What is the Abandoned Batallion? Is it some old army base?

It’s an army base with another one a short distance away. Wikipedia’s Interactive Map of the Syrian Civil War shows where all the military bases are located and their names by holding the cursor over their icon. South Front really needs someone to proofread their articles before publishing to correct grammar and spelling errors plus insert missing or the correcting wording.

Thank you for the ref, Bill. Two maps seem to be a little bit different.

All the SAA soldiers in the photo seem rather relaxed for being on the front line. Has me thinking that they found the base and surrounding area to be free of any ISIS fighters and took control of those without firing a shot. I’m hoping that ISIS has withdrawn their fighters from that region to be deployed in eastern Homs while doing the same with their fighters holding the phosphate mines. That would free up SAA units deployed in eastern Homs and Hama provinces to move north to regain control of the oil and gas fields south of Tabqa and start clearing out militants all the way up to Aleppo. I doubt if ISIS is making any money off the phosphate mines since they have to truck out the rocks. The Syrian government can since Syria was once the fifth largest exporter of phosphate rick in the World which brought in substantial revenues that they desperately need today. The two mines are serviced by a rail line that follows the highway up to Aleppo then west thru Syrian held territory all the way to the coastal ports. Their main customers were Lebanon, Greece and Romania. Syria retained control of a third phosphate mine near Damascus so probably was able to continue shipments to Lebanon to earn some money. If Assad can get other two back as regular customers then he should bring sufficient revenue to pay volunteers from militias that were granted amnesty. At this point Assad really needs experienced soldiers and not a bunch of raw recruits that were hastily trained.

A ‘Battalion’ is a military unit of approximately 800 to 1000 men. It cannot be a location.

You can have a ‘Battalion base’. . . . .but you need the location qualifier.