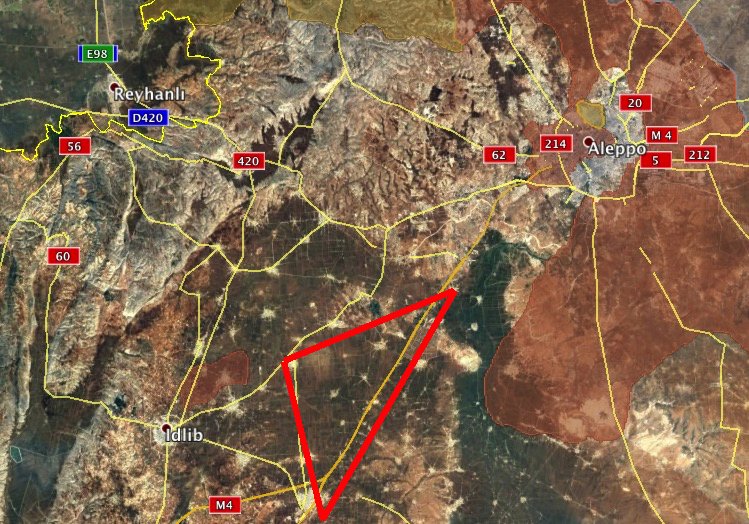 Reports have Syrian and Russian warplanes are huting Jaish al-Fatah‘s reinforcement convoys that heading to southwestern Aleppo in the triangle Saraqib-Taftanaz-Zerbah.

Separately, Syrian and Russian warplanes have also pounded the jihadists’ manpower and military equipment in southwestern areas of Aleppo. Pro-government sources report that the recent air strikes killed 20 and wounded much more jihadists in the Qabat al-Assad area .

Earlier today, a field commander of the Ahrar al-Sham militant group, Abu Hassan al-Shami, has been killed in fighting with the Syrian army.

Russians will keep bombing everything BUT southern Aleppo. – I’m sure this has nothing to do with the promise Russia made to Israel/America. – The blood is on your hands now, Putin and Lavrov! The negotiations will FAIL

The truth is that if Aleppo is regained by the Syrian Government then it will speed up the end of the war set in place by external forces operating against international law and committing horrendous war crimes. Obama and the American people will be held to account.

The negotiations may well fail, you cant negotiate with the terrorist nation USA.

The American people are hostages in this ridiculous charade just as much as you are. You think your leaders are corrupt? Just look at America’s 2016 candidates! – I love when people go after me just for the name. It exposes all the nationalist idiots and people who hate America out of ignorance. Hate the system. Hate the leeches sucking my country dry and polluting our planet. Don’t hate the American people. – Lumping all Americans into the same group is like calling all Muslims terrorists. – I agree with you on one thing – negotiating with the psychopaths currently running this nation is a complete waste of time. Hence my utter contempt for Lavrov.

Shoigu (spelling?) is the one Putin should be listening to IMO – ’nuff said.

All American’s are responsible for crimes against humanity committed in their name as was the Germanic people at the end of WW2.

PS i do not believe i took u to task because of your name, no matter how ironic it appears.

Stupid comment by a supporter of terrorism… Grasping straws George (you disrespecting the name) Washington ??

Stupid comment by somebody who sees nothing but a name. – I was referring to the promise Putin made to Netanyahu when he visited Moscow to not provide air support for Hezbollah. I’m pro-Assad and pro-Putin but VERY critical of recent events in Aleppo, which I believe resulted from bickering between allies. – You might know this if you actually read my comment and understood the big picture.

You constantly fail to realize they DO BOMB southern Aleppo, they cannot carpet bomb entire city, they cannot use helicopters anymore, and these sporadic, cautious airtrikes are not very effective in urban warfare… the SAA is exhausted, and unlike jihadists they have no reserves, they are weak, can’t even hold their positions and RuAF can’t win the war for them.

I read frequently simmilar comments from you, pretending that Russia doesnt bomb south Aleppo. I dont say you are wrong but, how do you get this conclusion? I mean not bombing! The reports are telling that SAA and RuAF bomsb targets arounda aleppo, supply lines, support unitts etc. Are suggesting that they have to send all air force elementsts to aleppo and carpet bomb rebel position that they already dug in? If SAA cant conduct any forward ops, why then bomb rebel positions? Air force does not bomb to kill, bombs to surpress on the front lines. seems to me very unefficient… Maybe you have other sources of info for the bombings.