On January 28, warplanes of the Russian Aerospace Forces and the Syrian Arab Air Force (SyAAF) conducted over 75 airstrikes on positions, ammo depots and vehicles of Hay’at Tahrir al-Sham (HTS) near the town of Saraqib in the southern Idlib countryside, according to Syrian pro-government sources.

The sources added that Russian and Syrian warplanes also targeted the positions of HTS near the towns of Maarrat al-Nu’man and Kafr Nabl in the southern Idlib countryside.

From its side, the HTS-linked news agency Iba’a reported that HTS fighters repelled several attacks of the SAA on their positions in the Abu Duhur area in the eastern Idlib countryside. Syrian opposition source said earlier that notable parts of the town are still under the control of HTS and its allies.

The heavy Russian and Syrian bombardment may be the first phase of the Syrian Arab Army (SAA) new military operation to break the HTS siege on the towns of al-Fu’ah and Kafriya, 13km north of the town of Saraqib. Observers believe that the SAA will launch its ground attack after the upcoming Sochi conference on January 29-30.

Thermobaric bombs used in Idleb offensive. The same type that is used by TOS A-1. Great improvement in fire power. It’s probably intended to send a strong message to Turkish army which has entered Idleb. Some call it a poor man’s tactical nuke.

The Golan-1 rocket is a terrifying to see and scares the crap out of the Islamist terrorists of HTS and it’s factions. Mostly hear only HTS with small pockets there and in other areas they are losing.

You can see from the pictures that a lot of these terrorist positions are in isolated areas where all of the civilians have left. The therombaric munitions are probably more effective anti personnel weapons with a higher death rate in the target areas, many of which are fortified, then conventional bombs.

Thermobaric bomb dropped on a terrorist position in Syria: 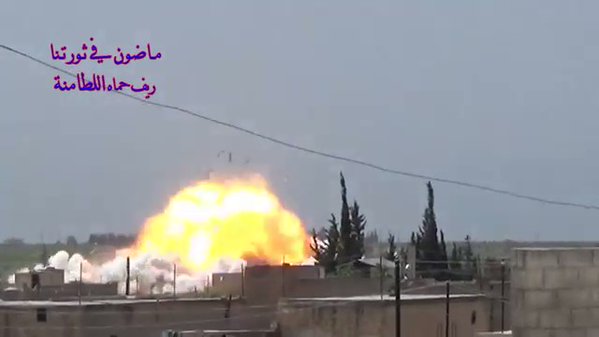 Gℴℴgle giving to people of each age 99 dollars/hr to do job off a home computer .. Work Some just few hours & have greater time together with your own family … any individual can do this official job…last Tuesday I purchased a new Fiat Multipla after just getting $5677 this-past/six weeks .it sounds the easiest job however you may no longer forgive yourself if you do not test this.!xw882t:∭∭∭ http://GoogleNetJobsPressFinanceReportsOnline/online/easytasks… ♥♥♥q♥♥b♥♥♥x♥♥e♥♥♥n♥♥♥h♥♥n♥♥b♥♥♥d♥c♥♥♥h♥♥k♥♥e♥r♥♥♥q♥♥♥z♥v♥♥q♥f♥c♥♥♥k♥♥w♥♥♥u♥♥♥j♥c:::::!tx283g:lh

After Trump Jerusalem decision Mahmoud Abbas should issue Fatwa that a country will be an enemy of Islamic religion and of Muslims who have diplomatic relations with Israel and US and have recognized the state of illegal European migrants (Israel) which is a Zionist terror headquarter. Send this letter to all world leaders by post as well as on social media.
—————————————————————————————————————————-

I know that the Islamic clerics issue fathwa.

Then why are you posting false information?

This is not false just its only obsessed you. Go and enjoy websites from Israeli terror network headquarter that say lies and spread lies like devils.

You just admitted yourself that it was false information.

Where did this come from, do you have a link?

For this you need to do some work. The data is available but not together. If you are interested then go to UK, US, UN and Google search engine. You will find whole data.

You didn’t answer the question, do you have a link or links supporting your claim? You also didn’t disprove the evidence that I supplied showing that you’re posting false information.

This is not the data from a single website. Do you understand English?

Don’t ask me stupid questions when you’re evading very simple ones, that any honest rational person could easily answer, in an effort to divert attention from the obvious disinfo that you’re posting here. I’ve conclusively disproved what you’ve written. You’ve disporoven nothing that I’ve written.

Can you disprove this with credible evidence?: 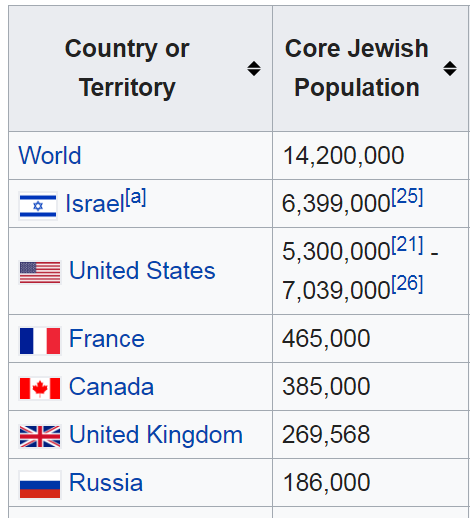 The Zionist terror network headquarter (Israel) in Palestine have violently persecuted hundreds of thousands of civilians. Thousands of villages and towns have been evacuated by gunpoints, demolished and instead new buildings have been erected. Each year Israel kidnap thousands of adults and kids from the streets and then smuggle them to different groups in Middle East for terror activities. On these hostilities of Israel the innocent civilians become angry in which they loose their mind that how to get ride of these illegal European migrants from their land.

Peaceful protests with flags, banners and placards is the legal right of all civilians. Anger eat wise. Anger is the sign of failure and frustration. Palestinian youths should not react with stones and knives but remain calm. Indeed soon Palestine will be freed. For a strong nation Education, unity, journalism, justice and a strong young qualified, English spoken leader, is very important.
———————————————————————————————————————————

Thermobaric bomb dropped on a terrorist position in Syria:

This is an aerial view of a TOS-1 saturation strike:

This is an overview of the TOS-1 system: