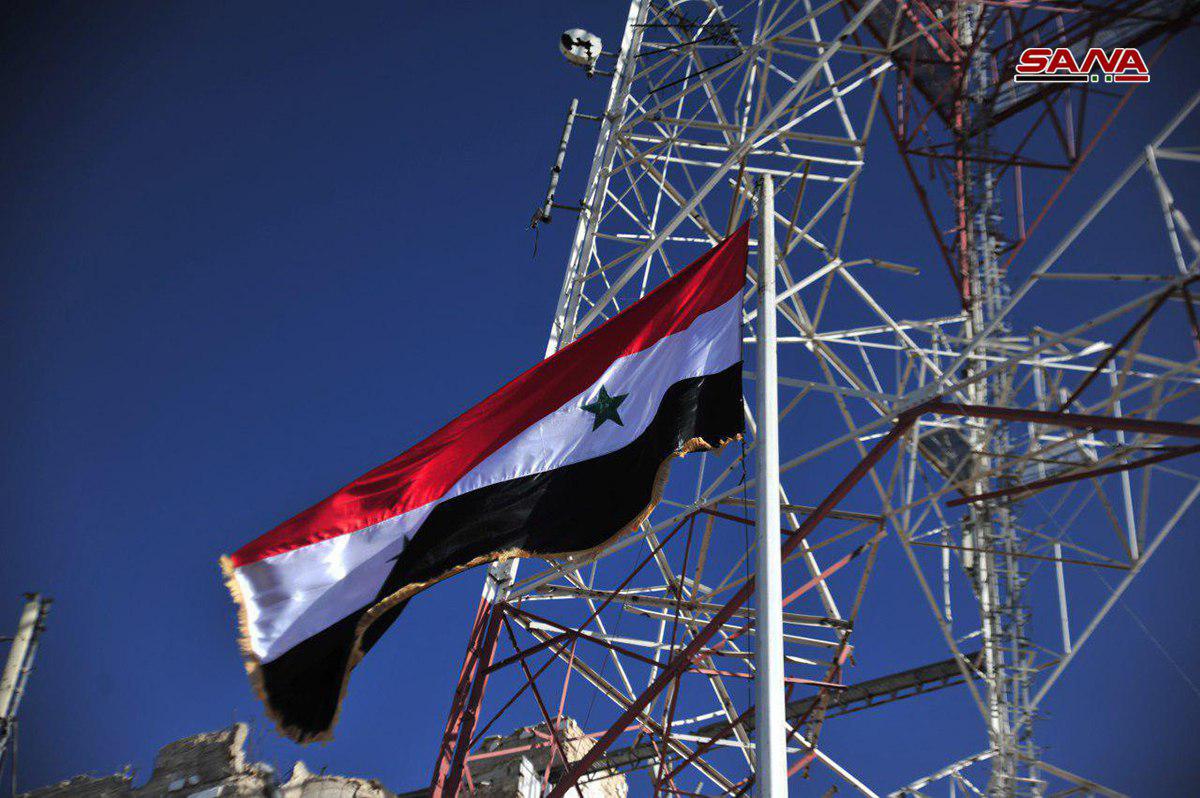 On July 12, units of the Syrian Arab Army (SAA) and the Russian Military Police entered the southern part of the city of Daraa, which had been under the control of Hay’at Tahrir al-Sham (HTS) and the US-backed Free Syrian Army (FSA) since 2012.

The Syrian Arab News Agency (SANA) reported that SAA soldiers raised the Syrian flag over the central square near the post office. 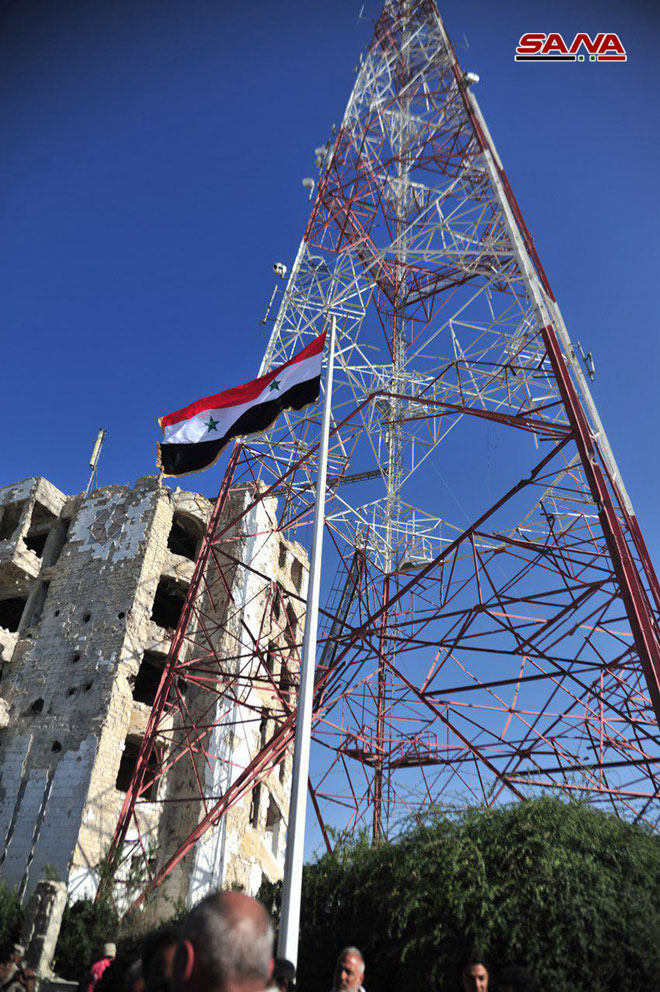 The deployment of the SAA and the Russian Millitary Police is a part of a reconciliation agreement, which was reached a day earlier. Under the agreement, radical militants will be evacuated to the opposition-held areas in northern Syria, while the former fighters of the FSA will join the SAA. 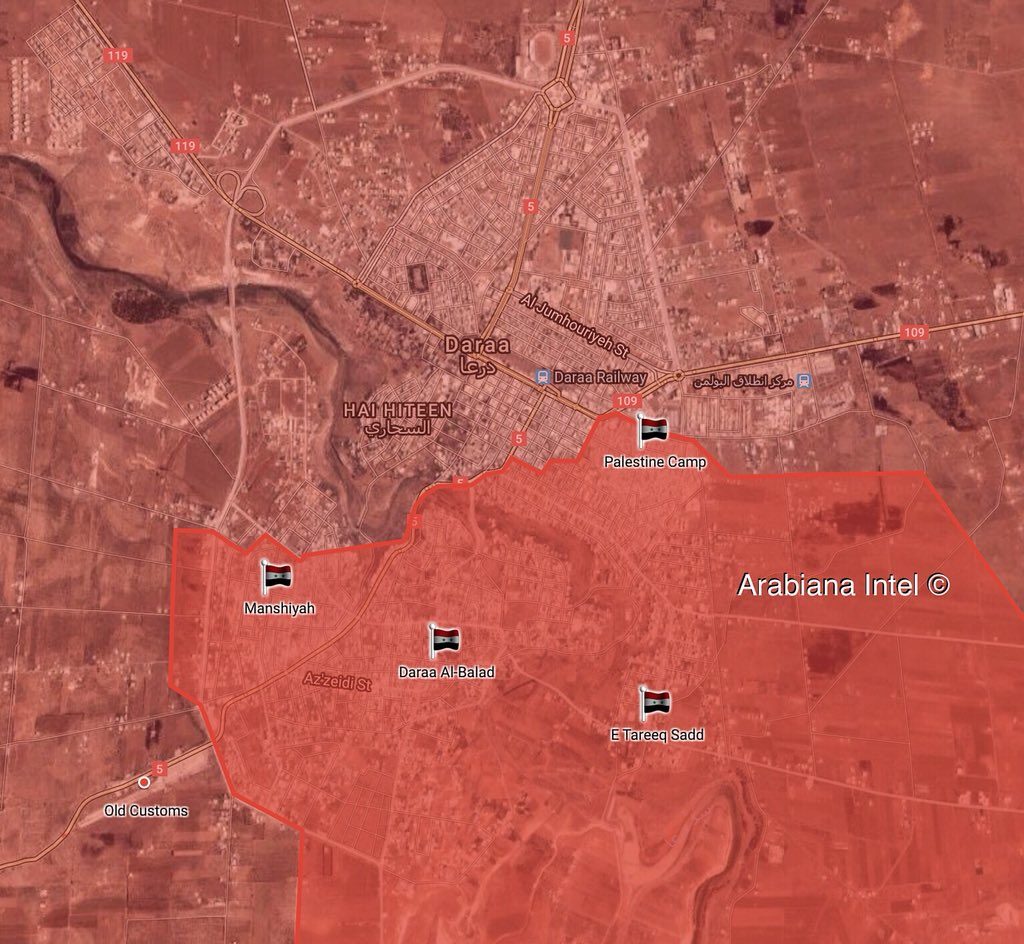 Last year, a coalition of HTS and the FSA launched a large scale attack on the SAA’s positions inside the city of Daraa. The militants were backed by the US-led Military Operations Center (MOC) in Jordan. Hundereds of SAA soldiers and FSA fighters were reportedly killed as a result of the absurd attack.

Now with the whole city under the control of the SAA, the Damascus government can work to provide basic services for the civilians there, similar to what it did in Aleppo and Eastern Ghouta before. 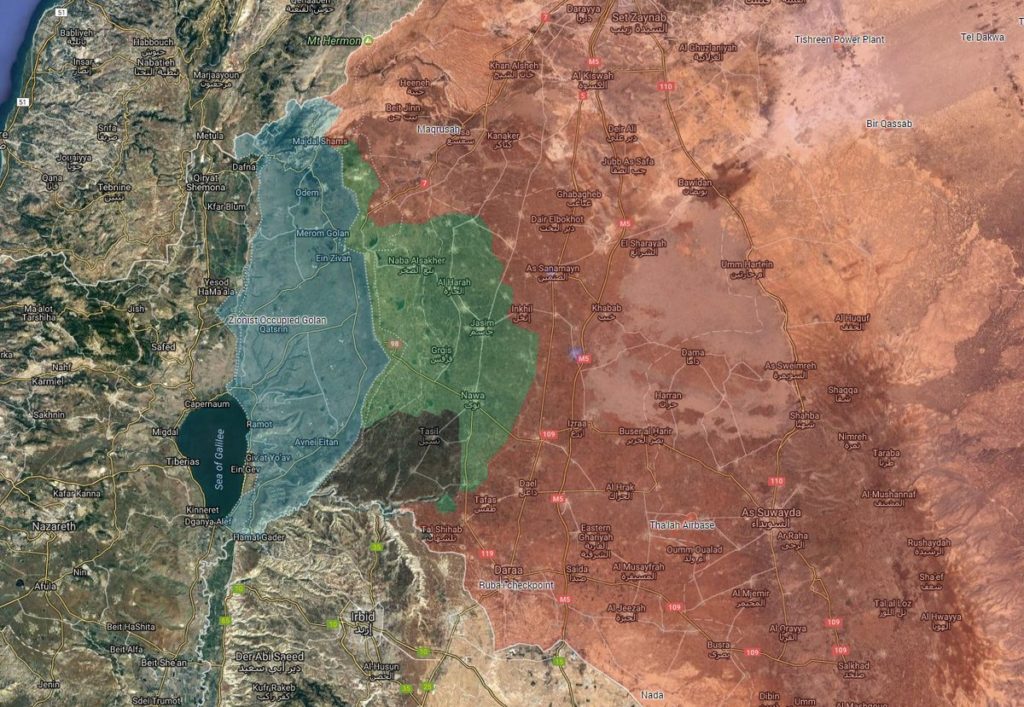 Heroes of the ME.

Meanwhile SF and the other Kremlin outlets are all covering up one of the worst atrocities ever caught on film.

This video shows a death squad trained in Israel murdering two young children and their mothers in Cameroon. The Cameroon soldiers, from a joint Israeli/French/America base in that African nation, state that they are proud to film the execution because the jews of Israel are proud to film their sniper atrocities of unarmed protestors in Gaza (now you can see why SF is censoring this story).

The jews of Israel have maimed and murdered thousands of unarmed protestors in Gaza over the last few weeks while vile zionist appeaser Putin feted the demonic war criminal king of the jews. Putin has stated that he 100% approves of how the jews operate in Gaza, and provides direct military assistance to the jewish butchers.

We cannot be suprised when africans trained by jews feel entitled to emulate the jews, and mass murder innocents- quoting the usual jew ‘excuse’ of ‘self-defense’.

But the jews are preparing for a literal GENOCIDE in Cameroon, as part of yet another jew action to take control of african resources.

Never forget the jews trained the death squads in Georgia that went on to murder the Russian peacekeepers in Ossetia. Of course Putin did NOTHING to avenge the death of those Russians.

In a decent, non-jew controlled world, this atrocity in Cameroon would be front page news everywhere. Instead we get this laughable distraction nonsense about Syria, so dumb-dumbs don’t notice how Putin has allowed Syria to be partitioned (or how Putin waited for Syria to be destroyed before getting Russian forces involved).

Has Putin sold the S300 to Syria yet? NO- Putin is too busy selling the S400 to Turkey, Saudi Arabia and all the other wahhabi bloc states.

The sickest I’ve ever seen. I wish I never seen it.

After seeing what Sadde replied below, I will not even watch it. If you have a depraved mind, keep it to yourself.

Yuddah has Russian Military police there and the opposition forces in are scouting ISIS forces.

Pfff go back to the new york times, biased fools like you dont belong here

Well Done RUSSIA for Helping SYRIA To Be LIBERATED

The Syrian General Kamal on the reconciliation team deserves most of the credit ,the terrorists plucked his daughter’s eye out then killed his son and he still forgave them. He is from Darraa and highly respected so getting surrenders and reconciliations here is made even more easy as this has never been a region of Sunni rebellion always were nationalists at heart but controlled by terrorists.

One in a million kind of person. There’s a special reward for his soul

As the Ancient Hawaiians used to Say:

Region is filled with Nationalists and Secular Sunnis and have been wanting to get rid of the terrorists since 2012.

I’m sure they thought that kicking the government out of Daraa would work, but at the end of the day cuz. They regretted as soon as ISIS and Nusra started to dominate them.

They were promised pots of gold and rainbows and unicorns to ride for free everywhere. That was all gone the instant they showed their true colors.

This is the best victory, with minimal casualties.

And the Zionist regime is getting more and more nervous, and afraid. There is a vast array of forces that are poised to attack, and liberate the Golan. In fact, you can safely say that there are literally armies, Syrian, Iraqi, Lebanese and Iranian just waiting for direct orders from Mr. Khamenei.

Israel would be totally overwhelmed, and air power wont change a thing. Even if U.S., French , British air forces try and come to Israel’s rescue. The forces of the axis of liberation and resistance have adapted to the enemy having air superiority, and this will be a nightmare for Israeli armored battalions, as the said forces are lightning quick, easily capable of outflanking, outmaneuvering, overwhelming the soy-boy civilian killers of the much overrated IDF. LGQBT’s, exchange students from the U.S. et al, and criminal Russian Jews are absolutely no match for the Syrian Arab Army, Tiger Forces and auxiliaries, the NDF, Hezbollah, the Iraqi PMU militias, or rather army, about 15 thousand Afghan volunteers, Russian Chechens , some working for the Russian Mod, some not, and they have a score to settle after the U.S. bombed a caravan they were in , killing perhaps a hundred comrades.

And these forces I have mentioned have 7 years of intense, attrition warfare, in the desert, rural and urban evirons. 7 years of being distilled down to perhaps the best, most lethal combat forces in the world. I salute the Houthi’s in Yemen, and Ansar Allah folks who, wearing beach sandals and bedsheets, armed with ATGM’s, AK-47’s , IED’s, a few anti ship missiles and ballistic missiles have been able to thwart a Saudi, U.A.E., U.S., French and British attack and attempt at their annihilation. Instead, this threadbare force has been nothing but hardcore to the max. And I firmly believe that one day, they will carry the battle to the capitals of both Saudi Arabia and in Dubai itself.

The IDF is only good when it comes to shooting unarmed children, protesters and farmers, but they are not any good at all at a tactical level. 2006 , during the 33 day fight with Hezbollah showed us that. Not if, but when they do come up against very determined, very angry and resentful opponents, they will be mince meat. If the IDF doesn’t watch out, they may have whole battalions or a division or two fully encircled right there in the Golan, and perhaps beyond, and why not.

Ben Gurion Airport in Tel Aviv will be flooded with Jews seeking and exit route, anywhere, and ship ports will too. The Israeli society are neither psychologically nor morally able to go to war on a serious level, and the Israeli economy wouldn’t be able to cope for a conflict lasting more than a month or two.

So I say lets do it. Why stop at the Golan border, when you have all this experience, co-ordination and momentum behind you.

Should Israel decide to get suicidal and opt for unconventional weapons, then Tel Aviv, Haifa and all cities and settlements will be leveled to the ground. If Israel wants annihilation, it will get just that, in return. Hezbollah have 100 thousand , now highly accurate missiles aimed at Israel, while Iran has the capability to bombard, on a sustain level, every square foot/meter of Israel in redundancy. So it will stay conventional, for the syndicate of international Talmudic Jews who rule the west will not want to accept 6 million Israels as an acceptable result. And their Zionist dream in tatters, totally destroyed.

Israel is banking on the U.S. to come in and save the day, but in reality, the U.S. cant fight a war in the Middle East successfully. Look at the what the Iraqi tribes, the insurgency did to the U.S., 14 out of the U.S. Armies 16 battalions were bogged down, chasing shadows in the desert, till they were ground down into the sand, by snipers, IED’s and sheer determination. Ask any Doctor/MD who worked at that time at Walter Reed Hospital in the U.S., where they took Iraqi war injured how horrific IED’s can be, and what a .50 cal sniper shot, or 7.62 round will do to a human head. The U.S, Veterans Administration is maxed out with psychologically traumatized ex-soldiers, many who turned into heroin addicts, suicides every day, and swarms of those suffering from PTSD.

And on top of that, Afghanistan is still a debacle, where another threadbare Pashtun Taliban have been successfully resisting the U.S./NATO for 17 years now.

Where there is a will to fight, against an enemy who has nothing to lose but freedom and justice itself, the U.S., British, and French are not very good warriors. The days of Soviet armied, divisions and set piece warfare are over. And as far as the IDF is concerned, this isn’t the IDF of Moshe Dayan against Soviet structured Arab armies in 67′ and 73′. This is entirely different, and Israel and its allies will want no part of it if they have the sense that there is still hope of upholding the Zionist outpost Israel.

… israel only survived because of miscommunication between syria and egypt, causing egypt to pull out under the impression that the SAA was bogged down or destroyed. This kind of miscalculation will, obviously, not happen again.

The Child butcher Netanyahu had told before that whole Daraa is ours.

Here is some good news from Ireland. ow.ly/TcjU30kVbfN

There is no such thing as “Palestinian” identity, however. Palestinians are Syrians.

They are practicing faking it in Idlib , but according to death toll between the two jihadi radical groups 8,000 are dead. Hopefully HTS and and JTS kill each other off at this rate but HTS has the upperhand.

Pussy cats not tigers. Another 4 busses arrived yesterday in Idlib. We will see who has better defense https://i.imgur.com/1bwEoTF.png

When it comes to “pussy cats” I can see Israeli Jihad ISIS PUSSY on your photo !!

FSA traitors commanders are the worst garbage that exists, they lost honor because a little money from Iran, lives these traitors are worth nothing, FSA from Daraa are fucking group of cowards and traitors, I hope that Mossad and Khalid ibn Army will start hunting on stinking FSA traitors and kill them like animals

FSA isn’t one thing, there are several groups that routinely get that label.

One of them, is made of former Syrian officers and soldiers, who had left the army to have the chance to prevent the country from becoming a fundamentalist craphole if Assad was removed.

I’m positive that many of those individuals are returning to the SAA in the various surrender agreements they are doing as we speak.

WOW! That went better than expected, I personally was expecting another Aleppo. But it would appear that the fight has left the ghost of the fsa…

Great work to everyone involved in bringing this to a peaceful conclusion.

It has been a very good year for Sanity in Syria, if the Bear can talk sanity into Turkey, Syria will soon be Terrorist free or in an open War with US.

Meanwhile the Isis coalition continues to bomb Syrian civilians in eastern Syria while pretending to fight militants.killing tens of them and wounding many more.Another war crime among many by the zionists, who are revenge full because of the success of Syrian Forces fighting Isis terrorists .The coalition of Satan.