The Syrian and Russian air forces carried out multiple airstrikes on ISIS positions in the southern part of Deir Ezzor. The airstrikes hit the cemetery area, where large numbers of militants were killed and wounded, as well as a large number of weapons and ammunition were destroyed. Moreover, Syrian and Russian warplanes bombed ISIS on the Malha road in the vicinity of the Regiment 137 Base.

Fifteen civilians lost their life and 63 were injured during the last 24 hours in the Harbash and Joura districts in Deir Ezzor city as a result of heavy shelling by ISIS.

From its side, ISIS announced that 420 young men from Deir Ezzor have joined the organization after a series of propaganda events organized by ISIS in the city and its countryside. More than 7000 men attended the events.

ISIS is now suffering from a great shortage of manpower after its large losses in Iraq and Syria.

“… ISIS announced that 420 young men from Deir Ezzor have joined the organization after a series of propaganda events organized by ISIS…” If only they were told that they will be driving suicide trucks. They are probably told they get to drive these cool armoured trucks to deliver weaponry.

Perhaps only 37 showed up.
And this is their ride. :D 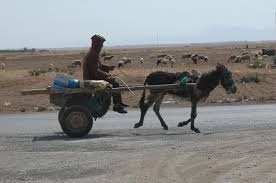 Ha ha! The pic took a while to load, and I honestly thought it was going to be an IS sheikh riding one of the “boys”, you know what I mean, without pants!

Or they were pressed into service using traditional press gangs going from door to door looking for able bodied men?

So what happened to the Tiger Forces in Palmyra , thought they would be in Deir Ezzor by now , and the airport would be back in business ?

Aren’t the Tigers in East Aleppo currently? And more generally, if your army has one or at most two units that can actually fight, what are the chances for anything resembling a victory?

That might have been true in 2011,but the overall combat capabilities of the SAA has vastly improved.

Well I guess the coming months will be the real test of that. But to defeat an entrenched opponent, on these pages it seems to *always* be Tigers to the rescue. On the assumption that those folks aren’t superhuman, that’s a narrow foundation for the SAA.

They are superhuman , that’s why they take out even the entrenched .
ISIS and Al Qaeda may have all the money in the world backing them and their path without heart . But when someone follows a path with no heart , we all know , the Eternal Cat will rip and shred them , as a mercy .

Yes, you have a point. Sometimes the SAA comes across as very weak. The officer corps needed to be improved, slowly it seems to be manifesting itself on the field. Gouhta has been attacked so many times, but the coordination of the attacking units were poor at best. This time is the first time they will attack with a unified command(belive it or not) and it seems to be going better. The Tigers must have a very high casualty rate, don’t you think?