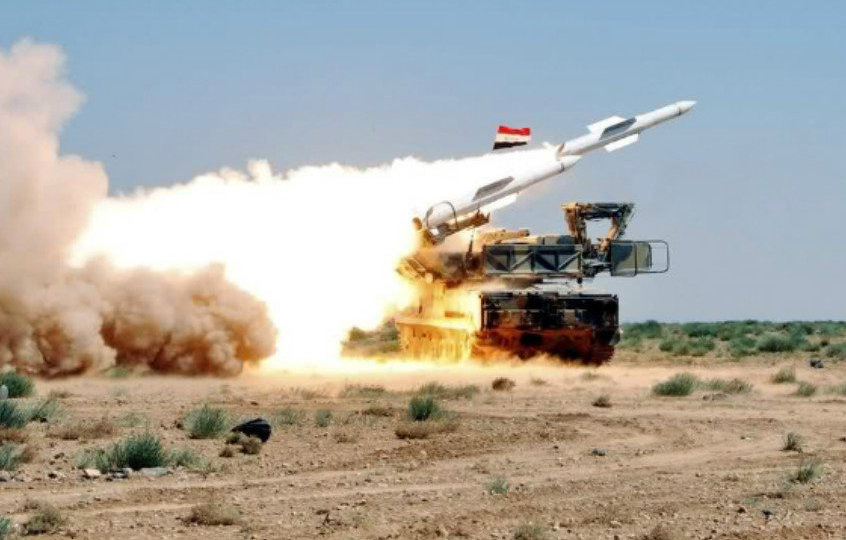 The Syrian Arab Air Defense Forces (SyAADF) interpreted 21 out of 24 missiles fired by Israeli warplanes during the most recent aerial attack on the Syrian capital Damascus, Vadim Kulit, deputy chief of the Russian Center for Reconciliation in Syria, said on September 3.

The Israeli attack targeted “Iranian positions” in Damascus International Airport. One of the targets was allegedly a warehouse containing “strategic weapons”.

While repelling the attack, a S-200 long-range air-defense system of the SyAADF fired a missile that chanced an Israeli warplane all the way to the Israeli capital Tel Aviv. The missile exploded off the shores of the city. In response to the incident, the Israeli military struck the system.

According to a recent report by the London-based Asharq Al-Awsat newspaper, Russian has been working to restrict Israel’s attacks on Syria by improving the capabilities of the SyAADF.

More information on the September 3 Israeli aerial attack on Syria and its results will likely surface in the upcoming few days .

They keep saying the missile chased the jet back to Israel. How fast was this jet?

Presumably the IAF jet – likely an f-15 – was using all its modern electronic suites and flares to jam the missile’s targeting system and was able to dodge the incoming missile (more than once?) in conjunction with extreme maneuvering to make an escape. The missile obviously has incredible supersonic speed, and was designed to travel very long distances, so kept on going right across Israel, likely scaring the hell out of Tel Aviv airport control! Safe to say that F-15 pilot is still wired from the adrenaline of it all.

Presumably they targeted thin air, only to scare them in tel aviv.

I imagine the missile was not so close when it all started, but when it came closer the operations room guided the plane to fly low over Tel Aviv, maybe even between the buildings, so any damage would lead to huge retaliations by public demand and anger. In the end, rather than escalate by causing damage in TA the Syrians decided to self-destruct the missile in mid-air. Mass media manipulation would have made any damage over TA into a huge event unheard of in the history of mankind, bigger than Dresden etc.

The end of the zionist state Is coming!!

As sure the sun will rise tomorrow.

Henry Kissinger supposedly said in 2012: “In 10 years there will be no more Israel”. Perhaps the global elite is tired of it. At any rate, given their enormous vaccination-rate, they’re likely in the process of wiping themselves out. Unless they’re all being given placebos, which would undoubtedly be much healthier.

Congrats, yer life has amounted to being a tedious disruption and disinformation troll.

Hi, please let me know how much are you getting payed for thus exuisite work. I am also thinking in changing my profession to bullshit blabber.

I know this has been said many times before however until you target the platforms the missiles will keep coming. Apparently the Russians like a constant missile command game?

Seems you don’t really grasp all this grown-up talk. I’ll simplify it for your level of understanding. These live fire events involve multiple projectiles moving in opposite directions, at the same time. A lot of the incoming projectiles get knocked out by the outgoing ordnance. However, due to the sheer numbers – dozens of incoming – a few will invariably get through. Now, these few are then loudly celebrated by the aggressor as successful strikes. However, if the larger majority are actually downed, the issue of who was really successful is contestable. The defenders shot down more than got through, so in purely numerical terms that is arguably more of a success. Can you see yet how all this is an information war as much as a shooting war?!

How many S200 does Syria have?

Hundreds of bateries, now in function.

How do you know “the targets are always destroyed”? Are you the one planning these missions? Do you know what the IAF’s targets were? Do you have some sort of x-ray super vision that can look at a smudge on a satellite image and determine that something was actually destroyed or if there was ever something there worth destroying.

If the IAF are so successful how come there are any air defences left in Syria? And how come they have to hit Damascus airport over and over and over again? It’s been six years since I’ve been following this … as long as WW2 and their still working on the same airport! Damascus should be a parking lot by now let alone the airport!