Washington’s idea to create a unified anti-Assad front has evidently failed. We already noted that there is no single force capable of playing that role. All serious military formations are stridently islamist and jihadist. The effort to create an independent military force through training specially selected and non-radicalized volunteers failed spectacularly (though we still believe that the program was a front for secret shipments of arms and ammunition to al-Nusra and ash-Sham) and Syria’s Turkomen and Kurds have a limited radius of operations which does not extent beyond areas which they inhabit and intense dislike by the Arab population. 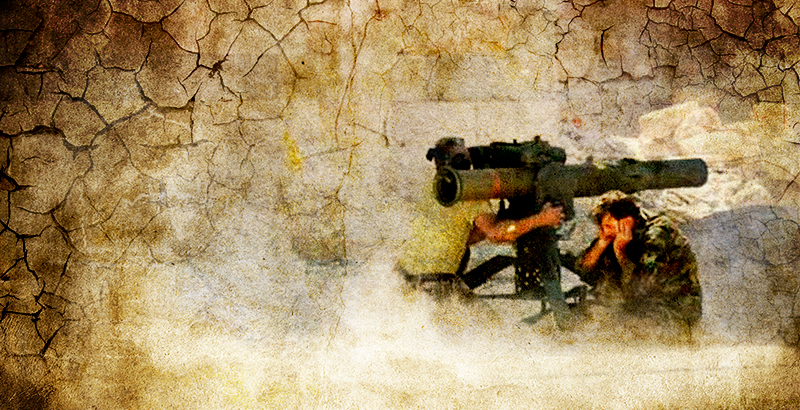 Therefore, by definition, they cannot claim to represent some general Syrian opposition by definition. They can be parts of that force, but nothing more. Therefore the US are trying alternatives. All of which boil down to selecting an acceptable islamist group. Right now that’s Jund ash-Sham which is staffed by former Jordanian soldiers and receives US weapons including TOW anti-tank missiles. The Geneva process of defining terrorist groups will show whom the US favors. These efforts are opposed by various groups which don’t wish to find themselves under central command and by their foreign sponsors such as Saudi Arabia, Qatar, and Turkey. They want to preserve a degree of autonomy and are against Washington’s efforts to take over all the components of the opposition movement. They are thus staking out their spheres of influence in Syria in the post-Assad period.

This state of affairs is illustrated by the heavy clashes in northern Aleppo province between a Free Syrian Army unit referred to as Merea (where it is located) which is officially fighting against ISIS units in northern Aleppo, and the Jaysh at-Tuavar group, with the latter being part of the recently US-established Alliance of Democratic Forces. The two factions naturally disagree over the cause of the clashes.  According to the at-Tuavar version, they were attacked by pro-Saudi al-Nusra forces near Azaaz in northern Aleppo province. On November 23, Merea in turn claimed it was attacked by at-Tuavar and Kurdish forces with Russian air support. At-Tuavar categorically denies this.  In the end it was Merea that prevailed, with support from ash-Sham forces that came to its aid, and the formally pro-Washington forces were pushed out of northern Aleppo. Thus US efforts to encourage Kurds and loyal forces to become more militarily active in the Aleppo province failed, which means a serious failure for the current Washington policy. As noted earlier, Kurds aren’t exactly eager to fight in “strange” parts of Syria. The pro-Saudi/Qatari/Turkish forces’ harsh reaction to the attempt by the Alliance of Democratic Forces to expand its territory is due to Aleppo being a strategic location for the external sponsors of the Syrian opposition and none of them intend to share it with others. Azaaz, furthermore, is a key point on the oil smuggling route and the islamist supply route. Ash-Sham is fully controlled by Turkey’s MIT intelligence and is used in accordance with an agreement between Ankara, Doha, and Riyadh to collect intelligence for the benefit of the triumvirate. The recent events have shown that they also support this or that force, depending on the need.

According to the US military, the situation presents a serious risk to the newly recreated Syrian opposition coalition as there exists the possibility of an attack against the Kurds attack along the entire front. This ought to be a wake-up call to Washington after all of its compliments addressed to Ankara which seem a bit excessive lately. It also ought to be a wake-up call to Berlin and Paris which, due to their dependence on Turkish bases, have been catering to Ankara and distorting its role in the Syrian conflict. Turkey, in the person of Erdogan, is trying to (with Qatari and Saudi support, of course) expel all possible “foreign forces” from its sphere of “national interests.” That’s how we ought to view both the downing of the A321 over Sinai, the Su-24 over Syria, and the current clashes around Aleppo. This hypothesis is supported by the fact that Turks have been using the Marea group to expand their influence and were not initially opposed to at-Tuarar participation in fighting against ISIS. But as soon as Kurdish forces came up to help, they were no longer satisfied with the situation and took all the necessary measures.

That is to say, the Turks act harshly against any forces attempting to establish control over Azaaz and Jarablus which are of strategic importance for the resupply of forces loyal to them and oil smuggling. In that context, one understands what Washington’s recent criticism of Ankara was about. It wasn’t about the Su-24 tragedy. It confirms our earlier conclusions that the so-called “security zone” between the two cities is crucial to ensure continued oil smuggling and resupply of pro-Ankara forces. The Russian military apparently discovered the Ankara’s “Achilles heel” as they recently intensified strikes directed against precisely that region thus ensuring further advances by the Syrian Army in northern Aleppo.

According to US analysts, Ankara is facing a very difficult choice. It has to decide the main issue: how to ensure the corridor remains open in the future. It would appear its hopes in the US and EU on that score proved futile. They are not prepared to establish a no-fly zone. It forces the Turks to act independently if necessary. It means preparing to introduce its own ground forces into the “security zone” area between Azaaz and Jarablus. That is why Turkish Army forces, including armored and artillery units, are concentrating in border regions. Russian operations and US passivity are simply not leaving Ankara any other choice. So far the Turks have been deterred from taking that step by Russia’s military presence and the huge political and reputational risks associated with that step.