The US-led coalition and the Kurdish-dominated Syrian Democratic Forces (SDF) are negotiating a deal with ISIS terrorists in the city of Raqqah, according to multiple local and opposition sources. According to reports, ISIS units would be allowed to withdraw to Deir Ezzor province where they help their counterparts fighting Syrian government forces.

However, the sides allegedly have some differences over the number of vehicles and arms that ISIS members could take from Raqqah city. By Wednesday, the deal has not been finalized yet.

Meanwhile, a spokesman for the US-led coalition released a statement saying that the SDF-linked Raqqah Civil Council and some “Arab tribal elders” work to protect and evacuate civilians from the ISIS-held area. It is not clear how this could be done in a big way without a contact with ISIS.

Some pro-government experts speculated that the evacuation of civilians will be a cover operation for the withdrawal of ISIS members.

On Tuesday, the Russian Defense Ministry accused the US-led coalition of imitating efforts against ISIS in western Iraq. According to the ministry, a low number of the coalition’s airstrikes allow ISIS members to cross the border and join the battle against the Syrian Arab Army (SAA) near the city of al-Mayadin in the province of Deir Ezzor.

Clashes for the city are ongoing.

The SAA and its allies have liberated an area of 8,000km2 and taken control over the entire Jordanian border with Rif Dimashq province, according to pro-government sources. Government forces reportedly cleared the entire area from terrorists.

If it is true, this will allow the army and its allies to free a significant force that can be used against ISIS across Syria. The ISIS-held city of Mayadin and the T-2 Pumping Station are obvious targets for this.

ABORTION RIGHTS IN THE OIL FIELDS!!!! AND RAQQA! 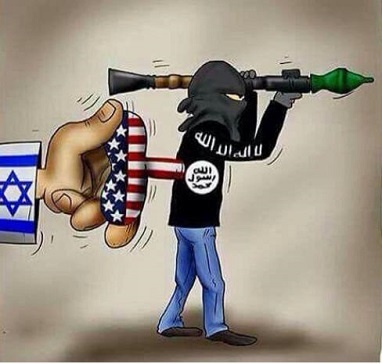 Maybe and maybe not. either way, the thing to do is crush ISIS first and worry about the others only after ISIS at least has no territory.

That will not happen. We are going to need ISIS, in its new, changed character. As you know, Trump is trying to get the Iranian “deal” de-certified.
GET OUT OF SYRIA, AMERICA!!!

Negotiation between colleagues and combat partner, it has to be.

Russian Air Force or missile forces should bomb ISIS and take care of the SDF and their handlers as well, as they are making the deal in Raqqa.
A deal between parasites.

What I like about your suggestion is that Russia would also be striking the U.S. “deal makers”.

The U.S. has not a clue what is really going on. Donald “Art of the Deal” Trump is up against a major deal-maker.

While it seems the “deal” has not been closed. a deal I am having serious doubts about, the practice is that even before the deal has been closed, IS is giving up. Video’s are on line (see fi @curdistani) where you can see IS members and families surrendering and being taken away and of civillians let go by IS. Hundreds of civillians have been evacuated today out of Raqqah. There is no or hardly any fighting anymore in Raqqah.

It is hard to see them resuming the fight after so many have given up.

But developments can change the situation very quickly so we just have to wait and see. A situation without deal and with a surrender would be much preferable.

There will be no white flag…

At the same time the head of YPG is “negotiating”, as in talking, in Moscow with RF MOD and CoS about Syria, MOD agreeing a federation is feasable for Syria.

Just another sound and for info.

I believe a federation would be the best solution. But all the black and green must be terminated first.

On that we can agree.

A federation where? And to include who? There must be more specifics, if we are to debate the issue.

Isn’t the YPG not liked in Turkey? Or maybe that’s the PKK? Or is it the KPP? Too many alphabet people. Gotta research, I guess.

Who cares what Turks say or want. Syria aint their business.

The Turks, of course.

But if you don’t have a link, I will assume you are lying.

u aint talking any sense at all. What link u talk about? U drunk, high or just stupid

All three. And if you believe that, I have some ocean-front property in Arizona I’ll sell you real cheap.

yankees have no rights to negotiate/be in syria