The Middle East, namely Syria, is currently the scene of conflict between Russia and the West, there is placed and disguised permanent ideological conflict of the 21st century 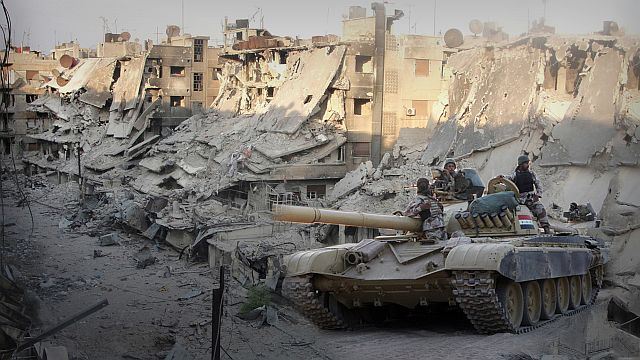 “Get ready for war” said a few days ago the founder of the private intelligence agency “Stratfor” George Friedman. In fact, he believes “that in every century is going on a systematic war, because every international system has destined shortcomings”. According to Friedman, in today’s world of instability in the forefront are coming regional powers such as Japan, Poland and Turkey, so he expects even the naval war between Japan and the United States. That said the founder of the CIA in the shadows, but until recently, Japan was called “unsinkable aircraft carrier of America”.

Or does George Friedman only successfully exploits specific fears? Or he wants to remind us of the not so distant past: some new economic collapse, a new depression, a new Hitler…

In fact, the story of the Third World War has been ongoing since 1945 anxious mark of times in which we live. Fears of World War II, the war threat and reality of war have become a permanent phenomenon of the era since September 11, 2001. The end of violence in Iraq, Afghanistan, Libya, Yemen and Syria is not on the horizon, and Russia on one side and the US and Europeans on other side are embroiled in economic and cold war. In the context of developments in Asia, there is the question of whether the economic rise of China may permanently remain peaceful, or it will one day lead to a military confrontation with the United States?

Of course, not all is wrong in theory of a new World War. Radical Islamism is a totalitarian movement, but a thesis about World War, however, overestimates the internal unity and determination of the West’s opponents.

Terrorism and Islamic radicalism, although always fanatical and bloody, do not represent the existential threat to the West as a whole and Russia. Economic and technological base of this opponent is ridiculously weak compared to the West and Russia, and its spiritual significance can not be compared with the seductive power of former communism worldwide. The real challenges that the West faces in the 21st century is growth in Asia, one who wants to lead the World War on the Islamic Orient is just wasting their strength.

Viewed from Europe, the wars in Afghanistan and Iraq have an unusual, almost opposite, vision. The US invasion of Iraq in 2003 was not met with approval in Europe, except the British no one has joined the Americans in that war. But, for Europeans, Afghanistan was a “good war”.

UN gave it legitimacy and nobody could say that Western powers wanted to provide oil in the mountains of the Hindu Kush, but they were saying that NATO troops want to assist in building of the new Afghan state. But the fact that in Afghanistan is happening the real war in which the fighting, killing and dying are taking place, and that this war could be lost – this fact was in the West, and primarily in Europe, long repressed. Afghanistan is underestimated war with unforeseeable consequences for the West, the whole system of thought, about the idea of humanitarian military mission, about the war that in reality is not war, about idea that this war brings peace and freedom. All this collapsed in the Hindu Kush.

When it comes to Iran, that war has never had a chance to be accepted by European countries. After that, the turn came to Libya and Syria, and now whole Europe is paying the price of French, British and American adventures. We found ourselves on the front line of “battle” with desperate migrants fleeing war and poverty, potential jihadists and radical Islamists. The wars in Iraq, Afghanistan, Libya and Syria, at least when it comes to Serbia, are not and were not our wars, but because migrants they are now, in some way, starting to be “our” wars. But we have absolutely no impact on developments in these countries.

Since Russian President Vladimir Putin in 2007 at the International Conference on Security in Munich said to the Americans “that the world is not only the” idea of the cold war is a political reality again. Open war between Russia and the West can hardly happen, but the atmosphere is poor and constantly stalking each other’s every move on the other hand is not good for the future. Whereby not only Russia and the Western conflict with Russia is what is most important. The most important is that the motive of the cold war is becoming general, and how much that motive is offered as a key idea for the interpretation of the world situation.

Middle East, namely Syria, is currently the scene of conflict between Russia and the West, there is placed and disguised permanent ideological conflict of the 21st century. But exactly in Syria and migrant crisis, Europe has shown that it is strategic weak, because of tension and confrontation does not suit EU, which is located in the immediate neighborhood of Russia and the Islamic Orient.

Karl Popper many years ago said that “from a strictly logical reasons, it is not possible to predict the future course of history”. I would add that hegemonism provokes opposition, that any power vacuum will be filled, that evil exists in history and that sense is not his master. Historian Charles Bijerd once said: “When dark comes, the stars are beginning to shine”.

In this context the Serbian foreign policy must maintain a balance of strict military neutrality and political courage. We avoid and will be avoiding all the cold war, as much as possible. And if they, God forbid, can not be avoided, we will, I hope, be on the right side…