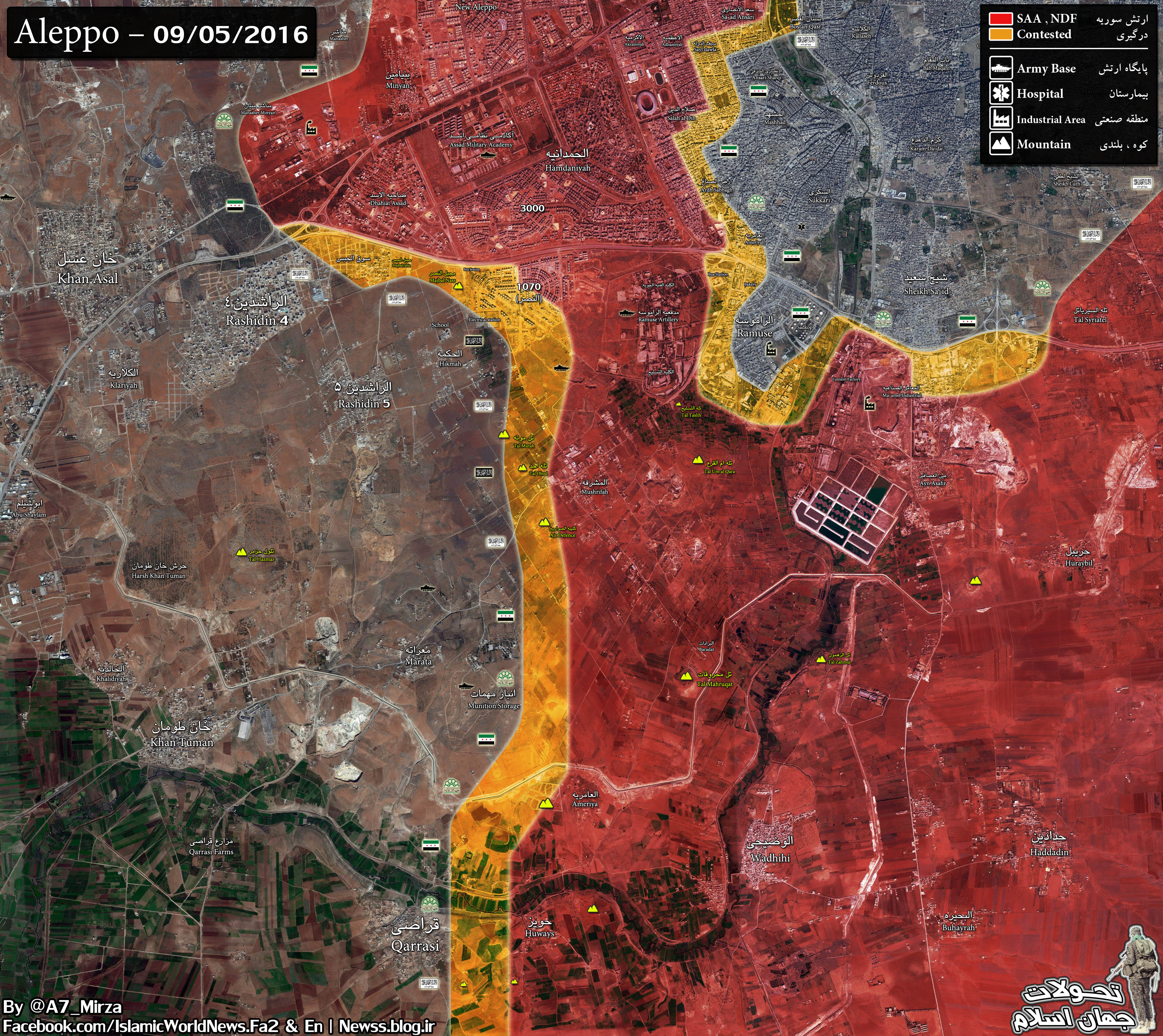 Since the February ceasefire in Syria, which was broken by U.S. supported Jihadis, Russia tried to press the U.S. into fulfilling the UN Security Council resolution 2254. The resolution signs off on the ceasefire but demands that all nations continue to fight the Islamic State and al-Qaeda.

But the U.S. continued to support al-Qaeda and its various front group in Syria like Ahrar al-Sham and Jund al-Aqsa. “Moderate rebels” were armed with modern weapons by the U.S. and trained in camps in Turkey and Jordan. They were sent to Syria to integrated with al-Qaeda and made it impossible to fight one group without hitting the other. The U.S. used this ploy to protect al-Qaeda from Russian and Syrian attacks. Such attacks, it claimed, would break the ceasefire as they would also hit its “moderate rebels”.

To gain some negotiating advantage Russia and its Syrian allies closed all access to east-Aleppo which is held by Jihadis. The U.S. sponsored rebels and al-Qaeda responded with an attack in south Aleppo which then broke the new established siege.

But that move was a hail-Mary pass. “Rebels” from all fronts were pulled together to support the attack. MANPADs were delivered to deny Russia the use of attack helicopters. With the help of an al-Qaeda mass suicide attack the “rebels” took the artillery college and adjacent areas in south Aleppo and managed to open a corridor into east-Aleppo. This was a serious set back for the Russian plans.

The response was constant bombing of the hinterlands of the “rebel” held parts of Aleppo and Idleb governate which made any supply of their front difficult. The Russian and Syrian air forces destroyed the “rebel’s” infrastructure, supply sites and their command and control elements. This took some time to show the inevitable effect. But today the Syrian army and its allies reconquered the artillery college and the Jihadi path into east-Aleppo is again closed.

It is likely that the now failed plan of lifting the siege on east-Aleppo was so costly, with over a 1,000 rebels dead, that a repeat of any such attack is no longer possible.

But the Russian pressure to commonly fight al-Qaeda has still not resulted in an agreement. Late in June some hawks in the U.S. administration leaked “conditions” under which the U.S. would agree to Russia’s demands. Those conditions were ridiculous. The Syrian government would have to ground its airforce and would have to stop fighting its immediate enemies while Russia would only be allowed to targets the U.S. agreed to. The negotiations had only onepurpose:

The plan, if it was correctly “leaked” to the WaPo author, is nothing but additional delaying and obfuscation. The U.S. has no interest in ending the fighting in Syria. It wants to keep the conflict going as long as possible to “bleed” Syrian, Iran and Russia as much as it can.

But Russia insisted. Recently it seemed that the U.S. would finally agree to separate its “moderate rebel” Jihadis from al-Qaeda but it continued to demand that Ahrar al-Sham and Jund al-Aqsa should also be excepted from attacks. This as even U.S. experts acknowledge that these are mere front groups for al-Qaeda itself:

The United States risks losing the war against extremism in Syria if it continues to allow Ahrar al-Sham and Jabhat Fateh al-Sham to be seen by the Syrian people as the victors in Aleppo. Ahrar al-Sham is as much a part of al Qaeda’s long game in Syria as Jabhat Fateh al-Sham. It shares the same goal to shape Syria’s population in a way that facilitates global jihad, and its pragmatic approach advances al Qaeda’s aim to build a durable safe haven in the Levant.

Today the Russian-U.S. negotiations failed again. The U.S. accused Russia, without any specifics, of backtracking on already agreed parts of the deal while Russia says the U.S. insists on continued protection of al-Qaeda elements.

The Obama administration does not want a deal at all. It wants to kick the can down the road for the next administration to pick up while all parties in Syria continue to bleed.

It also has no interest at all to subdue or eliminate radical Jihadis. It continues to support and supply these.  A London Times reporter recently found that one rebel commander, Hakim Anza, who shot the reporter point blank while he was handcuffed and imprisoned by rebels in Syria, is now the leader of a “vetted” and CIA supported “moderate rebel” group:

Two of his brothers joined the al-Qaeda affiliate the Nusra Front. One of them spoke on record about his loyalty to al-Qaeda to The Times. Meanwhile The New York Times ran a story about a war crime committed by Hakim Anza in 2012.
…
Last month, however, video surfaced of Hakim Anza proving that he was not only free, but was also serving in a CIA-vetted Syrian rebel group, First Regiment (al-Fawj al-Awwal), which was receiving US weaponry, including Tow missiles, as well as air strikes in support of their operations.

Hakim Anza is one of the “moderate rebels” the U.S. wants to protect from Syrian and Russian attacks. There is no reason to assume that any other “rebel” the U.S. supports in Syria is a less dangerous man. These brutes are the people the Obama administration wants to empower to rule that country.

One hopes that Russia has sufficient plans to eliminate them even while the U.S. continues to block any cooperation.

The US wants to protect it’s head choppers and can never be trusted. As a response the Russians should vapourise them.

I’m not really surprised.How odd they were trying to push for a 48 ceasefire when their positions were being assaulted by SAA and were on verge of breaking down.

Its evidently clear that US is still keen on pursuing its age old policy of creating and keep supporting terrorism in other countries. The best example are Pakistan and Syria. God knowns , where do they bring fancy terms from. like”Moderate Rebels”. Will they really tolerate even one “Moderate rebel” like those in USA.

What I see leaked in the Western press doesn’t give much hope. It looks like the conditions would be even worse than with the previous truce. And what to think of the opening of access to East-Aleppo?

The re-establishment of the siege should do much to clean things up. The Jihadis used up a lot to break it in the first place. It looks like they are getting rolled even further at the moment. If they cannot recover and in a hurry, it might be ball game over. I expect the US to push hard, along with a few others, to try and change the dynamic of what has taken place on the battlefield.

Come on, hypocrite USA leaders. It’s not like you didn’t invade 10 countries in the last 60 years.. that’s an invasion every 6 years. Go cry NATO mommy for human rights and war crimes. Go and do it. With a straight face. I bet you won’t be able to do it. On the other hand, Russia doesn’t need to and doesn’t depend on anyone as they are playing by international laws and trying to help a legitimate country in need. You can’t criticize anything about them.

“One hopes Russia has .. sufficient plans to eliminate them “. And should do so now, before Turkey comes in from the west. With a serious force of Russian troops, everything west of Aleppo should be cleaned of jihadists (Al Qaeda’s). With that done the SAA would only have one front, on the east, be they ISIS or Turks. The US only offers hardball, time for a home run.