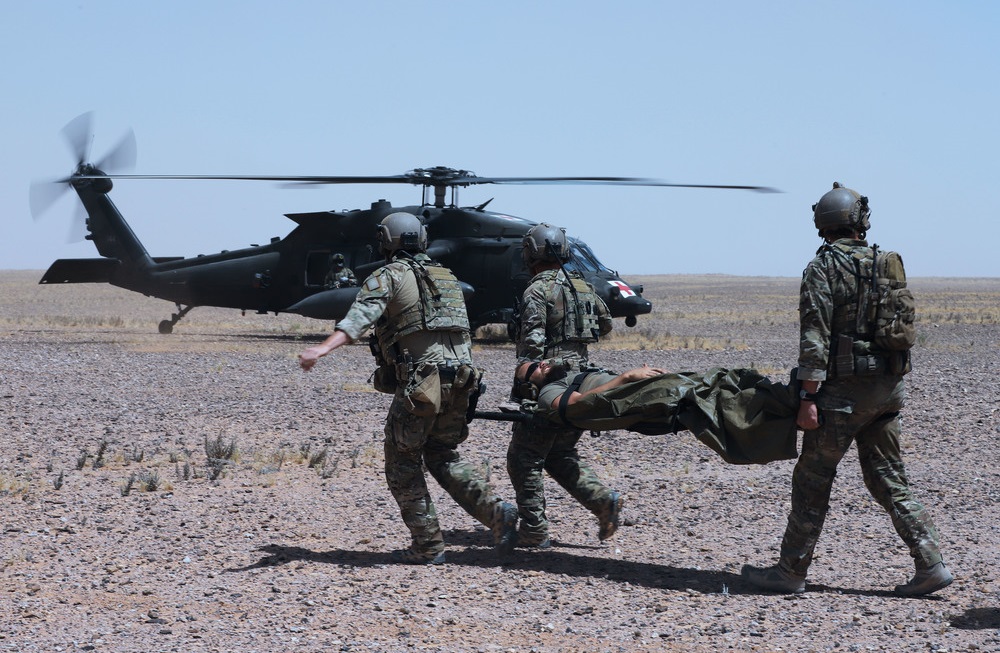 Green Berets haul a simulated casualty towards a HH-60 helicopter during a medical evacuation exercise within the 55km deconfliction zone in Syria, May 27, 2020. (U.S. Army photo by Staff Sgt. William Howard)

On April 7, two American service members were wounded in an indirect fire attack that targeted a base of the US-led coalition in Syria’s northeastern region.

In a now deleted tweet, the coalition’s Special Operations Joint Task Force-Levant (SOJTF-L) said that the attack hit the Green Village base, which is located in al-Omar oil fields in the southeastern countryside of Deir Ezzor.

“The attack injured two US service members. One was treated and released, while the other is under evaluation for traumatic brain injury. This incident is under investigation,” SOJTF-L said in the deleted tweet, noting that an investigation was launched into the attack.

This was the first confirmed attack on US-led coalition forces in northeastern Syria in more than three months. Kurdish sources blamed the attack on Iranian-backed forces.

The Syrian Observatory for Human Rights said that the US-led coalition responded to the attack by shelling positions of Iranian-backed forces in nearby government-held areas in Deir Ezzor. According to the London-based monitoring group, the coalition’s artillery strikes resulted in no losses.

Less than a week earlier, a large explosion rocked the Green Village base. Back then, it was reported that the that US-led coalition carried out a controlled explosion of war remnants in the base.

The US-led coalition has been working to strengthen its security measures in Deir Ezzor for a while now. Very recently, the coalition launched a surveillance blimp from its base in the Conoco gas plant, that is located a few kilometers to the north of al-Omar oil fields.

Earlier this year, several attacks targeted US-led coalition bases in northeastern Syria. Iranian-backed forces were unofficially blamed for most of these attacks, which were carried out with rockets and suicide drones.

US has been killing Syrians and looting their oil with impunity for quite some time now, it is time to increase the cost on these worthless American childkilling cowards who are illegally occupying Syria and sponsoring terrorism. The US is the biggest war criminal on the planet next to Zionists and the Ukrainian Nazis.

The 10 best writing like that will share a banana from Assad. Its only used in his behind once.

You know because you put it there with your mouth

Jens, where have you been? I was missing my favourite troll!! Happy to read from you.

How can I earn money with trolling?, where can I apply? Please enlighten me!!

You are so funny, the best Troll ever!!

Great, now is a good time to wipe it off the map and make them pay for what they are doing in Ukraine.

Americans will start to knock out airplanes at Teheran airport as well.

So you didn’t see what happened to the Al Asad base in Iraq? it was trashed by 16 Iranian ballistic missiles,the Americans and their boyfriends were screaming and crying like big schoolgirls.LOL!!

They’re still crying for the Purple Heart I hear

Some of them became Muslims in secs after the first missile landed, LMFAO. The US soldier starts pissing and crying under his bed and called for God “Allah” in Arabic… I can’t forget that.

I have to say those terrorists, oh sorry “soldiers” had more balls than this Wahhabi-Zion cuck sucker Jens.

They should get their most expensive drone into Iran before they start thinking about that. Iran literally put in a museum LMAOOO

It should be wiped off the map along with every CIAisis faglet.

Its because You are unproductive lazy bums. You make no potential for changes apart from many children.

Wow, how right Jens is! Go on like that!!

Jens is writing a shit-ton of highly productive posts!

US is illegally occupying Syrian oil fields and stealing oil to fund Wahhabi terrorism in the region. It is time the Syrian and regional freedom fighters burn the ground under US occupiers filthy feet.

Before that Assads and his Baath Party stole it. ISIS stole it from that and the SDFs are the people.

Im sure some of the money are use for feeding all the non Assad supporters in Turkey as well as in the rest of the world.

Jens, now you have to explain. What did Assad steal from whom? So the Syrians were stealing their own oil? How criminal!! Assad must explain why the US Oil is under his sand!

I will throw you in the head with rotten danish fish. You punk.

WHY CANT THEY ALL DIE FFS?? GAS THEM VIA PROXY

Step up the attacks on the vile Satan worshipping Baphomet cock-suckers, damn it!!! Damn them all to Hell!!!!

That is interesting. The Syrian-Iraqi Shia backed militias are very slowly edging closer to open fighting with US Special Forces on the ground in far eastern Syria. The US, of course, have long directly targeted these very groups in the area with air strikes, but not through US Special Forces ground contact, where US SF are heavily outnumbered, and are reliant on USAF to maintain their occupation area at al-Tanf.

8D Chess Whores will be Whores