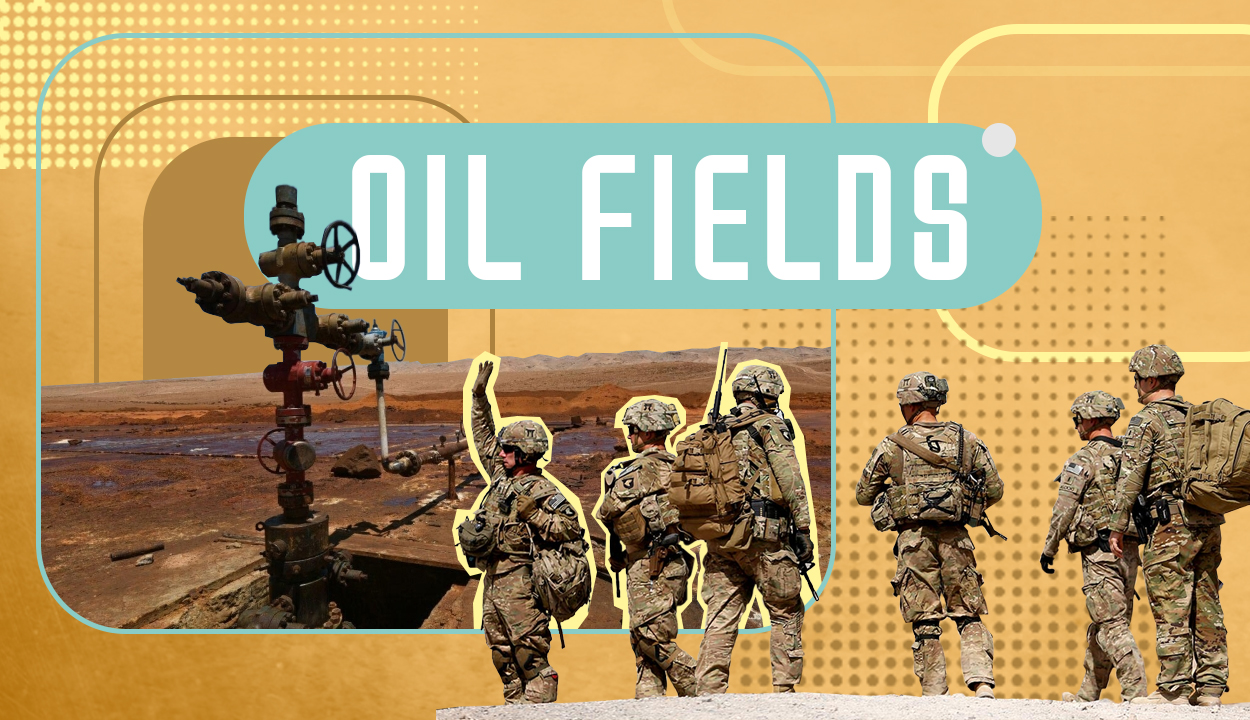 The Syrian Oil Ministry accused the US and its proxy in Syria’s northeastern region, the Syrian Democratic Forces (SDF), in a statement released on August 9 of stealing around 83% of the country’s oil production.

“The amount of oil production during the first half of 2022 amounted to some 14.5 million barrels, with an average daily production of 80.3 thousand barrels, of which 14.2 thousand are delivered daily to refineries,” the statement reads. “US occupation forces and their mercenaries steal up to 66,000 barrels every single day from the fields occupied in the eastern region.”

The ministry claimed that the oil sector in Syria has suffered losses of around 105 billion dollars since the outbreak of the war as a result of what it called the “US oil theft campaign.” Alongside the financial losses incurred by the oil sector were “losses of life, including 235 martyrs, 46 injured and 112 kidnapped.”

On 10 August, Russian and Syrian sources shared footage showing a convoy of tankers smuggling oil stolen from Syria’s Raqqa to Iraq. The footage was taken by a Russian attack helicopter. A day later, the Syrian Arab News Agency said that 144 tankers loaded with stolen Syrian oil had crossed into Iraq.

A recent report by al-Monitor revealed that the SDF has been selling Syrian oil in the Kurdistan Region of Iraq at prices as low as at $15-$19 per barrel. There, the looted oil is either mixed in with the Iraqi Kurds’ own crude and sent to Turkey for onward export, or consumed locally.

To this day, the US maintains hundreds of troops in northeastern Syria. Washington claims that its troops are in the region to counter ISIS. However, most of these troop are deployed at key oil and gas fields.

The US will not likely end its military presence in Syria any time soon. The Biden administration appears to be committed to maintaining a presence in the country for the long term.

It’s a good thing the US is illegally occupying and stealing thousands of barrels oil from Syria, that way Israel-first US politicians can’t claim the moral high ground when Russia occupies and steals hundreds of million of tons of grain from Ukraine.

How do you know that about Russia stealing grain !, so its a good thing illegally stealing from other country’s, like the criminal USA, well hopefully nexst they geth some big nukes in their country !

RF forces pretending to be blind and dumb with these illegal conduct of US personnel.. Why can’t they simply bomb the long convoy of the oil tankers just the way they did earlier on when they intervened to save the Syrian government.

Why dont You look up Yourself. I has been well descriebed for Years, where I live.

You might of the usual kind systematic overrating USSR and underrating USA(and UK).

It was very verified.

I highly doubt Russia will stoop to the level of US.

Me too. Russia has what they want. They have their bases and influence. They dont care about Syria as such as long Assad run his parts.

The rest is trouble and minus.

USA might be happy too. Assad is not gone but reduced to no threat. He even in stubborness gave away Afrin and partly Azas.

DEMOCRACYS FOR POOFS AND TEORRISTS.
Reply to  Assad Defeated Zionists

Nothing good about usa in syria dud!

We all know. As usual everything can be blamed to everyone else, You are not responsible Yourself.

They and me dont care. Why should we. You have chosen this and keep status quo by Assads and people like him.

No wonder none there lcould even liberate themself from the Osmans. only the Saudis and later on Israel has done like that.

It would make sense to make smaller Emirates. Muslim ancient time can handle some rulers, which has has smaller territories.

Spomething like Damaskus, Aleppo and Raqqa emirates, sultatnates might do it. Oarts of turkey should never be Turkey anymore as well. Parts should be added ti the Aleppo and Raqqa provinces.

Same procedure for Northern and wester Iraq. Its no country. All is highly corrupt there too. Sadr are not better then the reelected Goverment in that.

We should not send weapons to there but try soap.

Why is that convoy not being incinerated?

very strange that they dont do anything about it

I don’t get it,the Syrians have artillery that can hit that convoy without Russian airstrikes,its a strange war when you allow the enemy to steal fuel.

Its so funny You can write something like that. Americans, Turks, Kurds, Jihadists, jews and the rest of course are sitting ducks less clever then You.

Its a kind of corrupt.

Repeated question made for not listening and learning stupidists. You just dont get any informations about it. You not even learn to look for it.

You are kept like sheep, dogs or bought women. You keep your trasitions well.

Im a nice person and only want a wall around You somewhere west of Byzants.

So do you have to pay or is paid

Washington has created ISIS brigade on purpose. The Washington regime is not their to protect Syrian or Asad government from ISIS brigade but they are there to steal Syrian and Iraqi oil, gas, gold, silver and precious gemstones.

For sure Washing is not there to protect Assads. ISIS was the last desperate chance but got out of hand from them too.

There is not much oil and gas in Syria compred to the world market. But it do finance them there or partly.

I think we all know the U.S. thieving of oil from Syria needs addressing.

Why is Russia this tollorating, some rockets will do !

Because some rockets wont do. Yiu can try to send a mail about it….

“from the inception of amrerika it has been informed by ubiquitous sleaze and hustling”. Walter MacDougal

Thats a very biased version. You also forget the increased production can be shared fx for wellfare. If Yoiu dont produce, You have nothing to share.

So much for the indispensable and exceptional nation. I guess American exceptionalism must be referring to them being the only petty thieves on the international stage without fear of retribution. Israel are in close second for thieving with impunity. Is it possible that it might have to do with the ZioNazis being in charge of both countries?

“amerikans are 300 million used car salesmen that have no qualms about killing anyone that makes us uncomfortable”. hunter Thompson

Ha ha. Hitler told him or what. Gonzo Gonzo.

We have to lit our cigars, nothing personal.

Fine with me. The Baathists and their Oligarcs now shower in plastic bathtubs. Oil and gas there never was for all in Syria.