The map depicts the military situation in the area of the Syrian ancient city of Palmyra on December 8, 2016.

The tactical goal of the ISIS operation is to encircle Syrian troops in Palmyra, cutting off the Homs-Palmyra highway.

Intense fighting has been ongoing. 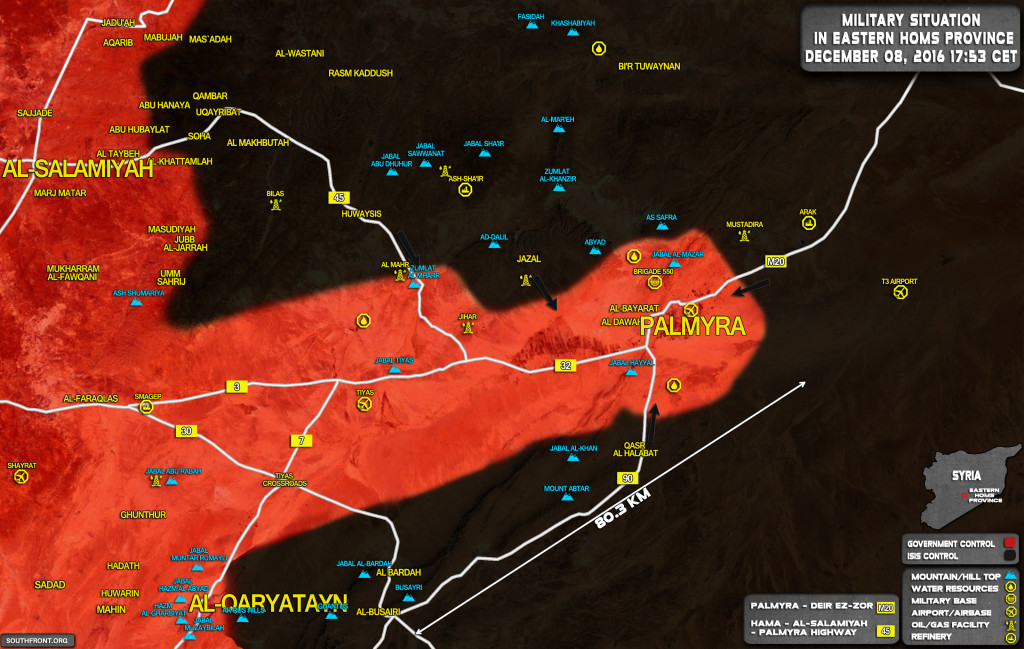 May be new combatments of Chechen special forces from Russia will be used not as guards of Chmeymim base… They used to fight in mountain areas, such as around Palmira.

No, it is good. Force and diplomacy always go together. And don’t forget Syrian Army has limited human resources.

First of all Russia force SAA to stop the fighting for some days in Aleppo to evacuate civilians.This looks good bit it will give the rebels some hope that they still have chance.Now they are doing nothing to help them in Palmyra.I am disappointed at them.

Russia is doing the right thing. To liberate what remains of Aleppo still needs great human and military resources. Why should Syria lose hundreds of military for battling hopeless encircled rebels in few neighborhoods? They have already lost, but the war is still long and other fronts need reinforcement, like Palmyra. So the agreement is a good thing for Syria.

becouse they will fight with them at western border of aleppo. the SAA does not win anything. and under such conditions they can not move the army into other fileds.

Breaking news.“Syrian government forces have suspended “active military activities” against militants in eastern Aleppo to enable the withdrawal of civilians from the city, Russian Foreign Minister Sergey Lavrov has announced while speaking in Hamburg, Germany.` Lavrov-the master of snatching defeat from the jaws of victory-strikes again. Instead of eliminating the terrorists, he succumbs to Kerry’s wishes, who wants to protect his valuable jihadis. There are literraly a few blocks left before Aleppo is free and now this..Pathetic.

and who’s gonna brings arms and men to the ragheads encircled in the few blocks of Aleppo? you and your IDF friends? lololol, get over it, no people right in their minds gives a fuck about zionists whining for killed jihadists, even less for this kind of bullshit.

What I hear from now is that SAA is still continuing operations.They havent stopped yet.

i hope to ignore the loser Lavrov.

I had respect for Lavrov until he signed the so called ceasefire BS with Kerry in February 2016.The only thing result was that the jihadists re armed themselves and SAA momentum was stopped.

Moscow bargains the lift of the sanctions,first betrayed Donbass and now try to sell Assad.

No, Jew, they are evacuating over 8 thousand civilians still left in the city. The terrorist have no way to rearm because they’re UNDER SIEGE.

some folks tend to rage when Syrians and Russians show respect for human life. Hell, those pinkos should be bombing hospitals, not saving civilians!

Nobody is bombing hospitals in Aleppo.You are falling for the Western BS.

Peoples you have to understand that Lavrov and Putin acts “diplomaticaly” so for the western propaganda is very difficult to proove that they are just slaughtering half Syria. If they would do it like you headers, they would give the western/NATO etc. enought reasons for own intervention. But they can’t because Putin shows mercifully. And you know what? I personally believe he is really mercifully from heart.

Look what Erdogan makes with his own people!!

If you had any respect for Lavrov, you would trust that he did what he was asked to do, which was set another trap for the west to show itself for what it is. .they did what they had to to get ahead of the media monstrosity. You never had any respect. Don’t lie.

the west is at a point where there is no need to set up traps, it just falls into the ones that it made up for itself when it decided to renounce everything good and just to money.

No you are wrong, this is a good deal because this will be the last such deal. With the freed up troops the Syrian army can now make big offensives and go a roll, so Syria won’t need to make such deals again.

Also when you are the good guy you have to be good. Many innocent Syrians, future Syrian voters will not die because of this deal.

Once the terrorist scum are out of the city the Russian and Syrian airforces can double cross the terrorists and wipe them out in a big bombing raid. Since there is no need for any future such deals, no need to keep their word on this one.

Russia and Syria don’t need to double-cross nobody. That’s a preminently jewish way of doing politics.

So it is okay to let all those terrorists get away to fight another day after all the war crimes they did?

Weak people lie, strong people don’t. Strong people have respect for honesty and sincerity. Weak people keep lying and cajoling thinking they can get away with it. The short term result will be that terrorists will be destroyed anyway, and that less Syrian soldiers and civilians will have to die. Of course it’s something that does not suit well the globalist , perverted scum that started this war.

Whitehot. Wrong its about winning with the fewest innocent killed and the fewest of your own soldiers killed, any who think other wise don’t care about their own people or life and are not fit to be leaders and they will lose, losing is weakness. Nothing is more honorable then victory, especially in war!

Lol. Maybe the Russians and Syrians are hoping they will end up as refugees in Europe.

These terrorist have never double crossed any one,Syria and Russia have to keep their word to terrorists?

Oh the Syrian army can wipe any left over terrorists after the bombing by both the Syrian and Russian airforce.

Totally in agreement ! It looks like Lavrov and Kerry get along very well, and there is a mutual understanding, unfortunately.

Putin -Lavrov.We saw this time and time again, both in Syria and in Ukraine. Kremlin cares only about cutting deals with the US that make it seem important as a power broker. Failed diplomacy caught in a 90s self-defeatist attitude.

They need to get their shit together fast. They cannot let Palmyra become another Dier-Ezzor.

Putin and Lavrov fall again in their friend Erdogan,Kerry and their partners of Nato members trap.Palmory has been captured in hours without cease fire and building damages assessment or swappers involvement.Wake up Putin and Lavrov NATO friend partner and west colleagues.