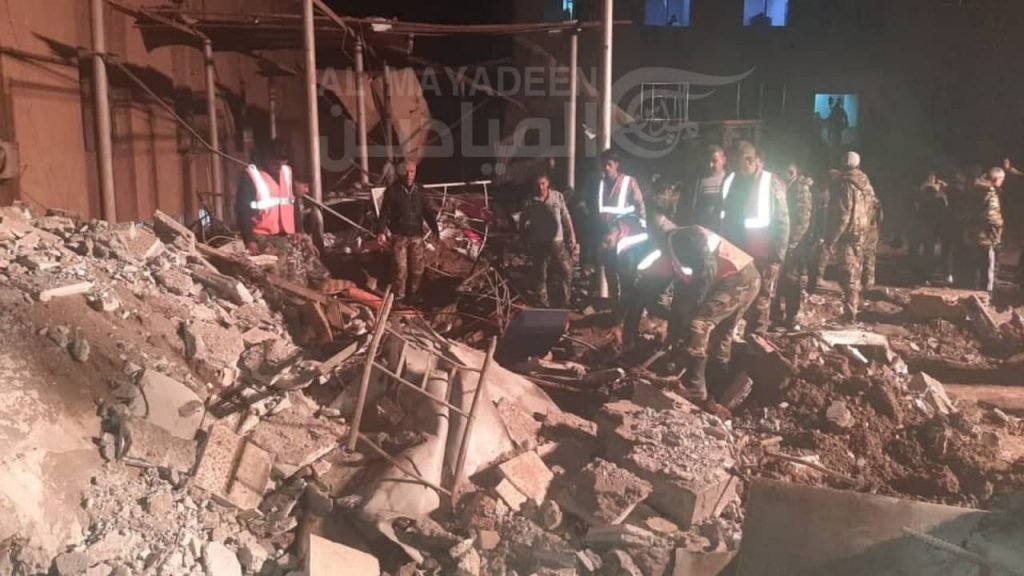 An impact site of one of the recent Israeli strikes

Syria is in fire ahead of the deep political crisis in the United States and the upcoming inauguration of neo-liberal President elect Joe Biden. Israel has been trying to exploit last days of the Trump presidency to cause as much damage to its arch-enemy Iran as possible, while the United States and Russia are reportedly regrouping their forces on the battlefield.

Early on January 13, the Israeli Air Force with the assistance from the United States carried out a large-scale strike on ‘Iranian-affiliated targets’ in eastern Syria. The intense bombing hit the countryside of the cities of Deir Ezzor, al-Mayadin and al-Bukamal.

Meanwhile, the United States reinforced its troops deployed in the Omar oil fields area with artillery pieces and military equipment. US forces together with their local proxies regularly conduct drills there. Taking into account that the US war on ISIS in the current conditions is mostly a farce to justify the occupation of northeastern Syria, they are apparently preparing for something.

Also, the incoming administration of Biden is in any way interested in the withdrawal of troops from Syria. Instead, it is expected to be full of people supporting the further occupation and even military escalation.

Brett McGurk has been an outspoken supporter of US military presence in Syriahttps://t.co/HrU0lahvol

The Russians are also regrouping their forces. Additionally to naval and air bases in Syria, Moscow has a permanent naval group in the eastern part of the Mediterranean Sea. This group consists of at least 10 ships. On January 11, the Russian landing ship tank Saratov also passed through Bosphorus towards the Mediterranean. Likely the ship carries supplies, equipment and weapons for the Russian military force and its allies in Syria. 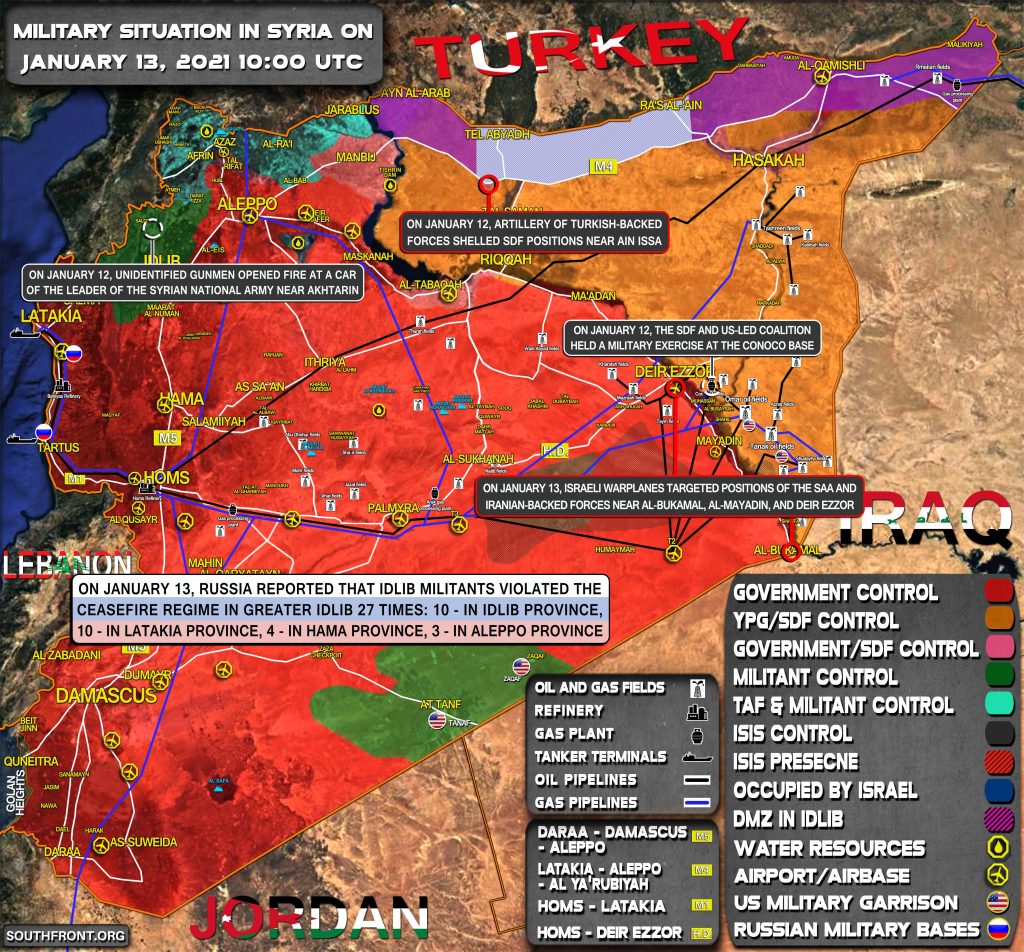 Summing up, the period of the Trump-announced troop withdrawal from Syria is nearing its end and the country prepares to enter the era of neo-liberal interventionism under the patronage of the Biden administration.

The problem with HumplyTrumply is that he is dumb. One has allies and enemies, friends, foes. Trump has only enemies and foes. He thought he could rule the Earth when he cant even rule the U.S. Russia, Syria, Mexico, Cuba could have been valuable allies and assets in the fight against the deep state but he didnt realize that. Instead he tried to subvert them with zero success. There is not one place on Earth he could run, and its his fault, nobody elses. Shame on you Don, you had a chance and f…. it up.

‘..in the fight against the deep state…’

What’s the deep state in the US? Thats the Christian Zionists and the Jewish Zionists. He has a chabnic leader son in law, and a lubavitch daughter. He comes out of the khazarian mafia family, even his dad was a lubavitch big spender – and part of it. He has achieved everything for Israel and nothing against the deep state. That’s because the Israel complex in America is the deep state. The man was one big huge PsyOp, together with all that horseshit about his fight against the deep state from Q-Annon and initially with the help of Wikileaks (which baywatch girl who wrote a book together with a lubavitch rabbi did visit Assange often?). It was all fake – he was a Lubavitch/Khazarian Mafia President – and the left is in it too…

Israeli attack on eastern Syria was carried out with intel from US: NY TIMES report

Aww … your bro’s got smashed again?

It seemed he lied all the time,so to put them off their game,but too much air in the head began to swell,so now it’s realised he’s just another ny nothing burger,it’s gonna haunt him like no tommorow,sadly He failed to get a grasp on the truth,and because of this to his epic fail,chances are if he was more serious about doing the right by the peoples,maybe god wouldn’t turn on him, though that don’t make biden the saviour of usa either,if anything it will only get far worse:

He did realized. He wasn’t allow to. He tried to start a new relationship age with Russia (remember his meetings with Putin and his statements?) and Russia gate came out (it came out in the first day of his presidency and even before!). The enemy he chose was China, for good reasons: China is the main globalist force in the world, the enemy of the National state.

Trump was an idiot, he alienated the armed forces and the generals on his staff with his mafia like conduct, even many conservatives disowned him. The deep state consists of unelected individuals that determine national policy, when elected I thought he was going to turn the tables on them, however, he became one of them along with his propaganda apparatus.

Trump did well on golf and casinos. His wife had more style than most we have seen in this office. Trump also kicked Bolton, Stoltenberg, Trudeau, Merkel, Macron, Clapper, Comey, in their arses. Trump destroyed the TTP, the Clima bs, arrested a bunch of pedos and gave MSM the f…finger for 4 years. Not much but some crumbs were made.

who will win from this war, I think PKK terrorists

Certainly … they’re not being attacked … eh?

Whose providing the GPS data?

The Zionist criiminal regime is on a sticky wicket and they know that with Trump gone and US is in self-destruct mode, their options are very dim. They are evil and insidious and will give it their most strident try to coax the US into an eleventh hour war, but the Pentagon has neutered Trump and Biden has his hands full. The Zionists are headed towards the dustbin of history.

Well, this is how Rotschilds and Rockfellers are making windows by billing gates and stealing jobs. They are also good nazi players (OSS foundings).

Iran is powerful … yes the odour is … eh?

Exposing the deep state did nothing to change anything,because faith without works is dead (period)

Shameless display of Zionist cowardice Frankly. It is quite obvious from the debris that someones house has been destroyed. These criminal Zionist savages need to be destroyed.

This is ONLY … ‘the war between the wars’

This is clearly a war crime against civilians, a child’s bed frame is visible in the rubble. Zionist cowards.

Those are IRGC beds … those f/kers are short … eh?

The Zionists used the Stealth F-35 … eh? Quiet in and out job … quiet except for the EXPLOSIONS … pmsl

I guess ALL those other attacks in Damascus et al …. can’t be denied … eh?

Putin and Trump could pick up the phone and have a conversation when they needed to, but there’ll be no phone calls between Putin and Biden. Most SF readers are about to miss Trump a lot more than they could ever realize, especially the Kurd haters, it’s back to the bad old days for Syria now, the second epoch of the Obama era is beginning. God help Syria.

Spoken like a true believer of of the LGBTQI movement, God doesn’t really exist so that means men can change into women and women change into men, so what were you before you had your sex change, were you a woman that converted into a man or was it the other way around for you, I can’t tell.

LOL, that was short and sweet for you, did the cat get your tongue, or is your tongue hanging out because I guessed your dirty little secret. I’m guessing you were a man and changed into a woman, but a really big fat ugly one, and you’re probably about as feminine looking as my old workboots are. I suspect that now you’re a plastic woman the men still don’t want you, and that must be hard to take, hence your bitter resentment and your foul mouth. But you can’t change back now, it’s too late for that. :]

I’m not Muslim you silly boy/girl, I was born a Christian, but now I only obey the one true God, my own conscience, and you should start doing the same.

Can’t you read, I said “I only obey the one true God, my own conscience”, and you need me to make it clearer. The religion of conscience it the first and only true religion, it helped change us from savage beasts into humans, and it works the same for everyone everywhere. And unlike other religions that use Churches, Mosques and Synagogue’s, it’s open at all the times with no exceptions, so you can consult with God anytime and anywhere. It’s the most perfect religion of all, you don’t need any written laws or rules, you don’t need priests, you don’t have to spend any money, and you yourself alone get to decide what the difference between good and bad is, not anyone else. So why don’t you join this religion as well, you’ll find your conscience is the best teacher of all, all you have to do is listen to it, obviously you haven’t been recently or maybe you never have, but it’s never too late to start.

US is not going to increase its military footprint in Syria.

Exactly … Syria is a failed state

No silly, US has no desire to place more boots on the ground to placate the Israeli interests in the area.

Biden wants out too …

BUT … the USA is a military superpower … bases / ports et al

You mean the Assad Crime Family will collapse?

Not a fan of Israel
Reply to  MH370 Atok The Deceiver