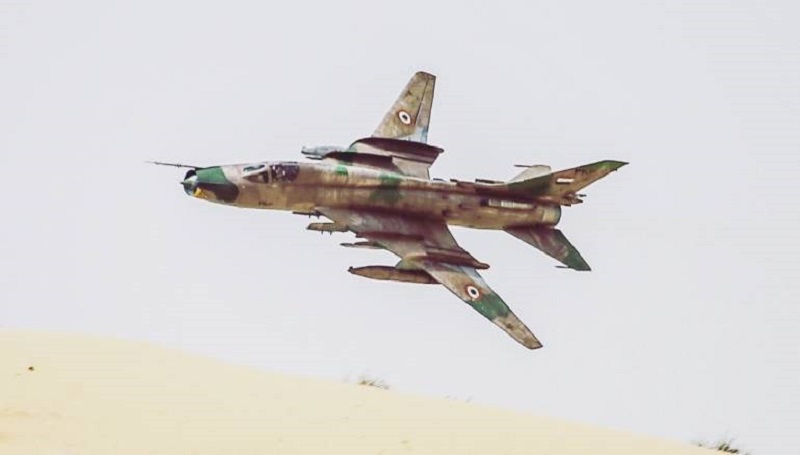 The Syrian Air Force has bombed ISIS positions inside the city of Al-Bukama in the province of Deir Ezzor based on the information received from the Iraqi Intelligence.

Syrian warplanes struck a facility used by ISIS to manufacture car bombs before sending them to frontlines in Syria and Iraq.

According to reports of Iraqi media, the active cooperation between Syria and Iraq in directing airstrikes on ISIS positions in eastern Syria resulted in delivering a devastating blow to ISIS’s logistical capabilities as well as the neutralization of scores of fighters.

In the Deir Ezzor provincial capital, the Syrian Arab Army (SAA) targeted ISIS positions in the southern section of the city. 35 militants were killed and many vehicles were destroyed as a result of the clashes in the area. The SAA also destroyed an ISIS tank with an anti-tank guided missile killing its crewmen in the Thardah mountain.

Breaking of ISIS’s siege on Deir Ezzor is one of the long-term goals of the Syrian Military Command. A large scale offensive in the direction of Sakhna and Deir Ezzor is expected to take off sometime this year.

Meanwhile, ISIS forces near Deir Ezzor are suffering from a shortage of manpower and equipment as a result of complicated situation in the provinces of Raqqa and Aleppo. The terrorist group had been pushed to send reinforcements to these areas.

ISIS’s retreat from eastern Qalamoun and eastern Suwaidi suggests that ISIS’s manpower strains are much more severe than anticipated. The terrorist group loses its influence in Syria and Iraq.

The Iraqi and Syrian people must stay close together, as many foreign plots are trying to rip up their countries on ethno-religeous boundaries(Kurdistan, Sunnistan, Shi’istan, ect.).

Exactly agree 100%, the elite NWO cabal globalists plans are being revealed and stopped so they are accelerating their plans and trying to come up with new sinister plots, but they will not succeed!!

In fact, the globalists are printing money fast to fund their Big Businesses’ military expenditure, which they hope to recoup in exploiting the conquered countries. Trouble is, time is running out for them as people round the world realize that western money is no longer worth the paper it’s printed on.

They don’t need any foreign intervention to get back at tearing out each other’s throats.

Iran and Iraq where two wealthy countries which were financially independent until reap apart by USA/Nato regime change.In Africa Libya the health and educational institutions were the best but after abandoning nuclear weapons This country was destroy with ISIS by USA/Nato for regime change and economic sabotage.Currently Iraq and Syrian Infrastructures are under severe attack by USA/Nato coalition under UN eyes.Harley put it straight indirectly that USA/Nato are the world best sabotaging and terrorist breeders at the extremely high speed.

What? Saddam squandered Iraq’s oil money and Iran’s Republican Guard did the same. Iran has been falling apart due to the long standing trade embargo.