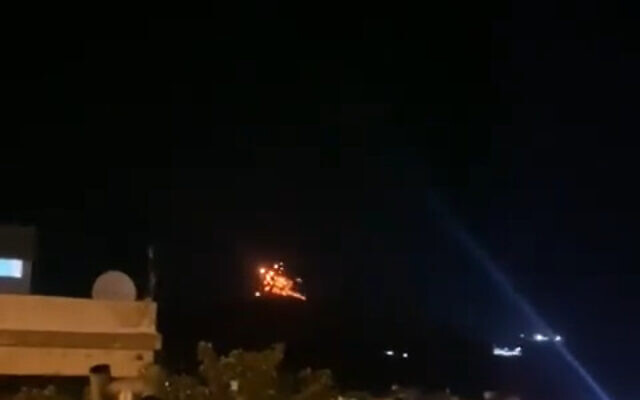 Israel has conducted several airstrikes through Lebanon’s airspace on targets in Syria, according to local media in Lebanon.

Civilian aircraft heading towards Beirut airport were affected during the Israeli Air Strike on Syria. pic.twitter.com/6c0kwHsP6H

Syrian State Media said that Syrian air defenses have intercepted targets in the sky of Damascus, launched from the airspace of the Lebanese capital Beirut.

The Israeli airstrikes on Syria have targeted the northern countryside of Damascus, Mezzeh’s military airport, Homs, and the Qalamoun region.

The Director of the Syrian Observatory for Human Rights said that at least three Israeli missiles targeted alleged sites and weapons depot of Lebanon’s Hezbollah in Qalamoun around Damascus’s countryside near the administrative border with Homs governorate.

Loud explosions shook the Syrian capital during the reported air strikes, two days after the Israeli military reportedly conducted twin missile strikes on a Syrian army base and an outpost controlled by Lebanon’s Hezbollah.

A military source told Syria’s official SANA news agency that most missiles fired by Israel had been intercepted by its air defense systems. The source said the missiles had come from the direction of Beirut in neighboring Lebanon just after 11 p.m.

There were no immediate reports of any casualties.

“The results of the aggression are being looked into,” the source told SANA.

Damascus residents reported hearing at least five loud explosions that shook apartment buildings over a 15 minute time span. The missiles appeared to have been fired from over Lebanon, jolting residents who heard them streak across the sky before striking targets in Syria.

Blasts could be heard in videos distributed by SANA, which showed what appeared to be missiles streaking across the sky.

According to a pro-opposition Syrian source in the Golan Heights, the office of the 90th Brigade commander, Brig. Gen. Hussein Hamoush, near the city of Khader, was one of the targets of the previous, August 17th strike, which Syria blamed on Israel. The second target was said to be a Hezbollah outpost in the area.

Stupid as fuck. Can you read at least? “Civilian aircraft heading towards Beirut airport were affected during the Israeli Air Strike on Syria.”

This is why Syria cannot respond in full force to the coward zionists. These cockroaches always hide behind other nations airplanes.

Since when does Southfront call Hezbollah “the Lebanese terror group”? WTF Southfront?

I noticed that also. Has SouthFront been infiltrated or compromised?

Dont’ worry, the Taliban are arriving. They will take very good care of you cow urine drinkers.

“Loud explosions shook the Syrian capital during the reported air strikes,two days after the Israeli military reportedly conducted twin missile strikes on a Syrian army base and an outpost controlled by the Lebanese terror group Hezbollah.”

Thanks a lot for impartial reporting.

Which one is the terror group? The one who fights real terrorists for safety of the world or the one who attacks in the dark of the night in support of the said terrorists?

I don’t expect to see reports as reality suggests (“Zionist terror army conducted missile terror attacks on Syrian government installations and near residential area“), but the least a reporter could do is to omit questionable labels and tags.

And a suggestion to friends and readers. Don’t ever lose your sensitivity and vigilance when you read, hear or see such labels. Remember that tomorrow it could be you who is called terrorist if you dare to resist and defend yourself just like Hezbollah does. BDS!