Published in espanol.almayadeen.net, translated by Lisbeth Mechter exclusively for SouthFront 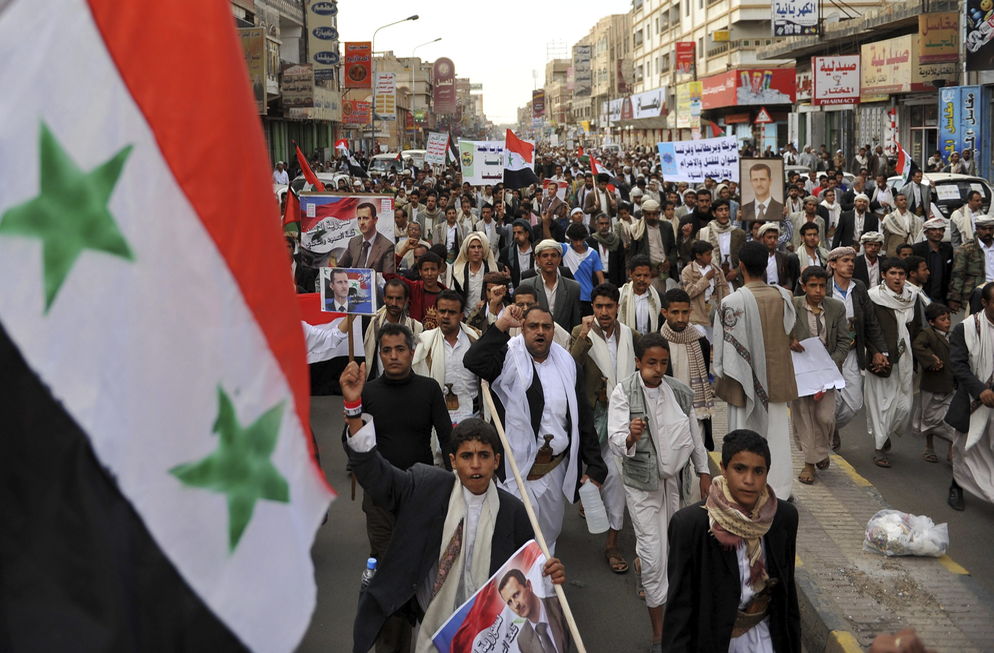 It`s widely known how Washington and London beheld the rise of Hitler in Germany with anti-Soviet hopes. The close-up to China also had anti-Soviet reasons orchestrated in the White House. Notorious was the stance of the US in the Iranian-Iraqi conflict, and their support to Islamist terrorists in Afghanistan against the Red Army is profusely written history.

These few examples (there are some more) help us understanding the role of the US when putting their boots, inconveniently on the ground. In the same way, we must understand what’s going on nowadays in Syria, country that has been through decades, an obstacle for the US and Israel’s plans and also for the fratricide oil-monarchies of the zone.

The panarabist proposal, the support to the Palestinian cause and the anti-Zionist resistance, the relations with the USSR and the concepts of social organization and state construction of Syrian leaders clashed always with geopolitical interests of the US, thirsty of oil and stuck in the Cold War; of a Zionist Israel with expansionist aims and tribal monarchies that witnessed the rising of their power with the oil production boom.

The US’ invasions to Afghanistan and Iraq, with the excuse of fighting against terrorism, more than the climax of the American hegemony, evidenced the exhaustion of a proceeding based on the use of force. As the US was stuck in Afghan and Iraqi territories, the global r-composition was taking an unexpected turn with the Chinese ascension, the Russian recovery and the beginning of a new era in Latin America.

At the same time, in the Middle East, Iran strengthened its positions even having tens of thousands of US soldiers in their east and west borders; Syria was coping with crisis with economic reforms; in Lebanon the resistance forces became an indispensable interlocutor; and In the occupied Palestinian territories, Hamas won elections for the first time. In this way, a notorious axis of resistance integrated by Iran, Syria, Hezbollah and Hamas was created.

Since then, Iran and its regional allies became strategic obstacles for Washington by halting circumstantial interests that also involved Tel Aviv and the monarchies of the zone. The Teheran-Damascus axis was at the gates of Central Asia and the whole East, where China and Russia were, and are still, the final target.

In consequence, different actions aiming to weaken such singular alliance were unchained. The Israeli militaries still remember with disgust how they had to abort their objectives in Southern Lebanon, when Hezbollah contained them showing a high fire power, dominion of the ground and control over the weaponry supply lines with the support of Iran and Syria in 2006. The resultant impotence was poured two years later against Gaza and Hamas, the weakest member of the axis.

Iran wasn’t left undamaged too, but given the size of the enemy, the tactic was different: the inner subversion spiced with international pressures and a ruthless media campaign aiming to isolate the country internationally. With the re-election of Mahmoud Ahmadineyad as president in 2009, the US developed an extraordinary subversive plan, strengthened by the new information and communication technologies able to deploy thousands of citizens in the streets claiming for the nullification of the result. However these prefabricated protests were surpassed, they constituted an example of what the Arab Spring would be, season that, maybe due to the climate changing never grew a single flower in any of Washington’s allied monarchies.

Following these actions, Syria became a target for the US that, with its proverbial opportunism, put in the scale more interests than scruples by supporting notoriously terrorist groups that enfiladed in arms against Syria and against an unaligned with the American axis Iraq, every time closer to Teheran, Damascus and Moscow. The support to terrorist groups materialized by military means and techniques, communication equipment, intelligence information and media coverage.

It was impressive to see the advance of convoys of trucks full terrorists and other artillery means through the sands of the desert without a single movement of the muscles of the spokesmen of the West or any of its mass media. With satellites capable to locate a moving squad in the middle of the wooded, high and thick Colombian jungle, it seemed unconceivable that the units of the Islamic State were moving in front of the eyes of the world’s major power leaving a trail of crimes against humanity in Iraq and Syria as well.

But that was the objective. To allow the advance of the Islamic State, push it against Syria, dismembering that country, weakening the alliance and intimidating a defiant Iran that was opposing to dismantle its peaceful and dissuasive nuclear program. But Syria resisted, not only against the inhuman members of the Islamic State, but also against the media campaign against the government of Bashar Al Assad who was criticized even by left-wing sectors which are now questioned for their doubtful capability to recognize the real enemy in the space.

The resistance of Syrian people, with thousands of fatalities and refugees; the determination of the official army to combat any citadel of the terrorists; and the decision of the president of not ceding towards any international pressure and stay in front of the country, vanished all the hypotheses that claimed that Bashar Al Assad had no popular support and that Syria wouldn’t be capable of resisting such huge invasion sustained by the US, Turkey, and some Arab and European countries.

For this resistance, the military and political backing of Russia has been crucial. Moscow’s decision to start systematic airstrikes over terrorist positions in Syrian ground became the turning point of the war and created the conditions for the advances that the official army is making lately by retaking, little by little, territories occupied by the Islamic State or its likeminded and allied collaborators.

This turning point in the war disclosed the real purposes of those countries that support groups opposed to Bashar Al Assad and at the same time claim to fight terrorism. An improbable contradiction that works to justify the supply of weapons and ammunition to the terrorists.

In this complex scenario, the US were pushed to maneuver politically in response to the pressure that the joint actions of the Syrian, Russian and Iraqi armies, supported by Iran and Hezbollah means. Victim of its own contradictions, Obama’s government and his allies are now debating between those who don’t want to offer a truce to Bashar and support the terrorists and those who, with more pragmatism, foresee the consequences of the consolidation of the Islamic State, a major involvement of Russia in the zone and a strengthening of the axis of resistance with Iran and Syria leading the alliance.

The attractive thing of this all is the silence of the big mass media who have almost omitted the latest triumphs of Iraqi, Syrian and Russian armies, including the important recovery of Palmira. Reality has imposed them silence to avoid the risk of discredit.

Certainly, it’s very hard to explain, after five years of an intense media campaign, how a dictator can reach victories and be praised by his people in the liberated cities. It’s complicated to assume that the Iraq-Syria-Hezbollah resistance axis, to which Iraq is joining, has proven force and military capacity. It’s very hard to explain how in just a few months the Russian Air Force has hit the terrorists more than the US-led coalition.

It’s hard to recognize in front of the whole world Russia’s political, diplomatic and military force and capacity. It’s complicated to explain who supports the terrorists and allows them to export oil. It’s hard to explain how the terrorists have gotten missiles and heavy weaponry… It’s painful for them to recognize that the plan hasn’t worked. That’s the truth that’s been omitted, hidden or distorted.

All that has happened until now confirms the place where Syria is in the world’s geopolitical table. True or not, the mythic words that are attributed to Catalina the Great must be rumbling in the ears of the war and destruction-bringers. It’s said that the tsarina claimed that “The gates of Moscow open at Damascus”. In the 21st century, we all know that’s true. Washington’s cravings confirm it; they just didn’t consider that they can’t cross the gates of the Great Mosque of Damascus with their boots on.

“The Israeli miitaries still remember with disgust how they had to abort their objectives in Southern Lebanon, when Hezbollah contained them showing a high fire power”

If I remember correctly that little war was started by Hezbollah. Israel were whooping their ass when a ceasefire was forced on Israel.