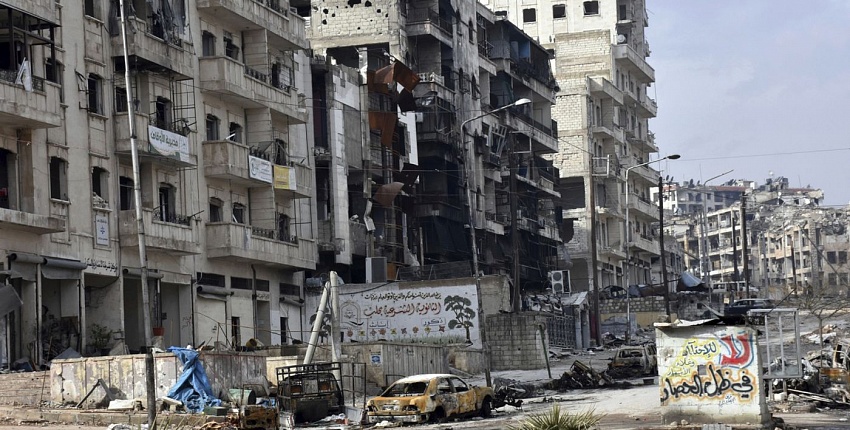 The mood in West Aleppo was decidedly upbeat in the wake of the Syrian Army’s recovery of that part of Aleppo which had been under jihadi thrall.  Not surprisingly.  On the ‘day after’, an eye-witness told us, the streets of western Aleppo were thronged with traffic, the restaurants were overflowing and ‘normal life’, to the extent that it can be truly ‘normal’, as it were, had resumed. North-eastern Aleppo, by contrast, lies physically devastated, and human life there has no more than a thready pulse (there is not much to return to, perhaps).

Nonetheless, there is a positive energy very apparent among the Syrian people: a sense perhaps, of having passed through their ‘Valley of the Shadow of Death’.  There is a positive energy, but it is tempered; it is cautious. As our friend who was in Aleppo noted, people are understandably sceptical whether the jihadists will abide by any ceasefire, and although ordinary Syrians are wanting the new era to be different from that which passed before it, they are leery of any externally imposed ‘political solutions’.  And they distrust Prime Minister Erdogan and the Turks, unashamedly and unreservedly.  But they do trust their own President, whose popularity is very evident, the visitor noted.

None of these sentiments – especially the caution – is surprising. It is reflected in government too. It is quite possible that the displaced jihadists will try to regroup, and to continue the war in one way or another. Patrick Cockburn, the journalist who has covered the Syrian conflict with great assiduity, has noted: “What [was not generally foreseen] was the speed with which Saudi Arabia would see its high ambitions [to dominate the Sunni World] defeated or frustrated, on almost every front.  But in the last year, Saudi Arabia has seen its allies in Syrian civil war lose their last big urban centre in east Aleppo … [Thus] the attempt by Saudi Arabia and Gulf oil states to achieve hegemony in the Arab and Sunni Muslim worlds has proved disastrous for almost everybody.”

That does not, of course mean that Saudi Arabia (or Turkey for that matter) will leave their protégés to twist in the wind of military defeat just like that: they may well want to demonstrate that the Gulf States, though weakened, are not powerless.  And like everyone else in the Middle East, they hang on for Mr Trump’s prospective policy utterances. The Gulf states too have opted to see a ‘silver lining’ to their otherwise dark clouds: they read the oracle of Trump’s Defense and Intelligence appointments to mean that America can be brought to the side of Saudi Arabia in a common ‘project’ to halt ‘Iran’s terrorism and interference in the Middle East and in Arab affairs’.  This may prove to be wishful thinking, as key Trump advisers, such as Steve Bannon, have earlier characterized Saudi Arabia as something of a fifth column, perpetuating the scourge of radical jihadism.

America’s likely posture towards Iran does, indeed, remain a moot point. Certainly, General Mattis (Defense Secretary presumptive) was particularly noted for insisting on strong military retribution inside Iran itself during the 2003 Iraq war, in retaliation for the US casualties that he attributed to the Iranian arming of Iraqi militia. Indeed, General Mattis had to be quietly advised to ease off on his Iranian obsessions, as his unrelenting persistence in this vein was irritating the White House.  Mattis is reported to believe that his early retirement from his military post owed mainly to his advocacy of military action against Iran – and to Obama’s irritation at his harping on the subject.

All the above is, as it were, the micro view.  The strategic one, however, has a distinctly positive cast. There can be no doubt: American foreign policy will change – possibly quite radically – albeit, quite in what way, we simply do not know yet. The Trump Team probably still has to thrash this out amongst themselves. In any event, the Syrian government will be only too aware of the possibility of a change in the strategic nature of the US relationship with Moscow, and the possibility of a strategic shift, too, in the western attitude towards the Syrian government.  The latter is already happening to a certain extent (i.e. with France).

All these are potentially beneficial developments for the Syrian government, if exploited correctly. Damascus, surely, will be assessing the possibilities for a wider political ‘Apertura’, at the same time that it is quietly pursuing one domestically (through a ‘bottom up’ reconciliation and political inclusion process).

In short, the cracking of the decades-long, US foreign policy mould is coinciding exactly with the moment of Syrian strategic military success. Gulf States’ ambitions in Syria have been thwarted. The former may try to keep the conflict going — but to what end?  Just to keep blood spilling?  It may not prove such an enticing objective to Gulf donors (who generally like to have a more definite purpose to their funding) – and nor is it such a heroic motive for the mujahidin: to give their lives simply to keeping the ‘show’ somehow ‘going’, until the curtain on their drama finally falls.

The Afghan experience tells us – some jihadi ‘enthusiasts’ apart – that inevitably, there will be a cooling of ardor both by insurgents and their donors. And crucially, America’s Syrian war ‘Wizard of Oz’, tugging at levers from behind a curtain, in other words, today’s ‘Charlie Wilson’ equivalent, so celebrated in Hollywood for bloodying the Russian nose in Afghanistan – John Brennan – is about to lose his job, amid a Trumpian purge of his former domain (the CIA).  Change surely is coming.

The strategic positioning of Turkey too, is shifting – though its precise trajectory is opaque in the extreme. But shift, there is.  It is clear that Turkey is in financial crisis.  Erdogan’s post-coup purges continue to decimate all sectors of society.  The news from Turkey is in lock-down.  Terrorist incidents are likely more frequent than we know – or, are reported.  And it is quite possible that Turkey simply is unraveling.

What Erdogan’s true political objectives, in Syria, are, are completely obscure (probably even to Russia, as well). But the facts are that the Turkish government instructed its insurgent protégés to quit north-eastern Aleppo.  Weapons and jihadis still cross the Turkish border – but not nearly so much. It seems as if the PM wishes to keep some lines open to al-Qaida in Syria, whilst pursuing his now bitter (after the filming of Turkish soldiers being burnt alive by ISIS) war with Da’esh and the Kurds. In short, Erdogan’s priority does now seem to be to destroy any prospect of a Kurdish enclave emerging in northern Syria. Russia seems to be trying to channel Erdogan’s erratic and volatile anger into constructive channels (with some success, though they cannot be sure of its constancy – when dealing with such a volatile temperament as that of Erdogan).

Bottom Line: Turkey has moved so far away from the US, with Turkish officials regularly blaming America for the coup – and much else – that it is hard to see that Turkey can easily walk this relationship back (though the possibility of a challenge to leadership cannot be ignored).  Erdogan too, seems now to be only on spitting terms with Europe, as well as at odds with America. So, is there any real alternative for Turkey, other than to move more deeply into the Russian sphere – even joining the SCO perhaps?  He may be hoping for something from a new US Administration; but the chaotic instability to which Turkey is now prey may make the Trump team highly cautious.

In any event, even were Erdogan to be toppled, most of the Turkish opposition are completely at odds with Turkey’s late Syria policy. This must be seen as the third strand to Syria’s strategic positioning. Distrust Erdogan Syrians may – but at least for now, the Turkish PM is saying the right things: i.e. that Turkey has no long-term interests in Syria, and that the Syrian state should remain undivided and whole.

So far, so good.  But though the auguries seem promising, it will not be plain sailing for Syria (or Russia). Russia practices close strategic co-ordination with both Iran and China.  The three states share a (more or less) similar geo-strategic perspective on world events – and a similar analysis of American policies (Iran and China perhaps being the more jaundiced).  The three states have a common economic view on the needs for new sources of economic growth, and see the One-Belt, One Road project as central to a revitalized global economy.  They also have a similar style in defence.  They have focused on defensive weapons systems which can effectively deny access, both physical and electro-magnetic space, to NATO and NATO-allied states; they have a joint air defence system based around Russia’s S300/400 family of missile defence, and sea defences based around a family of sophisticated shore-to-ship missiles and torpedoes.

It is clear that Trump wants détente with Russia in order to recast America’s foreign policy – and in order to curtail American overseas commitments.  There have been hints that he wants a relationship with Damascus too, in order to pursue the war against ‘terrorism’.  But what if the American demand is that, in return, President Assad must sever links with Iran and Hizbullah?  This would not be politically possible: the two states, Syria and Iran, have been intertwined with each other through peace and war, and in many various ways, since the Iranian Revolution in 1979. President Assad could not agree, even if he wanted to (which he clearly does not. This is the demand that he has consistently, and at great cost, declined).

Ditto for President Putin.  Iran, Syria, Iraq and Hizbullah are the infantry to the war on Wahhabi terrorism.  Yes, Russia has provided substantial air support, but without boots on the ground, Syria (and much more of the Middle East), might today be a part of ISIS’ Caliphate.  President Putin too, cannot renounce Iran, nor take sides with America against China. So to do could put at risk the whole of Russia’s defensive strategy.

This is the challenge. Can Moscow and Damascus create a new détente with Washington, and too, bring the new Administration to an understanding of the indispensability of Iran in ridding the region of extremist, jihadi armed movements? Perhaps Trump can agree to let Putin ‘manage’ this aspect of the ‘war’ in a separated ‘compartment’?

It will not be easy.  All the signs suggest we should not expect any early volte face on the part of ‘hard-cop’, Messrs Mattis and Flynn. Are Mattis and Flynn designated to play the ‘hard cops’ to Tillerson and Trump’s ‘soft cop’, in the latter’s businessman-negotiator strategy? It is not clear. The next period will be a real test of Syrian and Russian (and Chinese) statesmanship.  Expect a real roller-coaster ride of threatened crises and touted break-throughs, as the new US Administration begins to come up against today’s geo-political landscape – and before things settle into some sort of tangible outcome.  Whatever way the cards fall, by the end of 2017, the Middle East will look different – and likely, Syria will be in a much better place.

I agree that Russia and Syria cannot be separated from China and/or Iran by the west and the only way to defeat ISIS is with Iran and Hezbollah.

Should prove interesting what The Donald actually does.