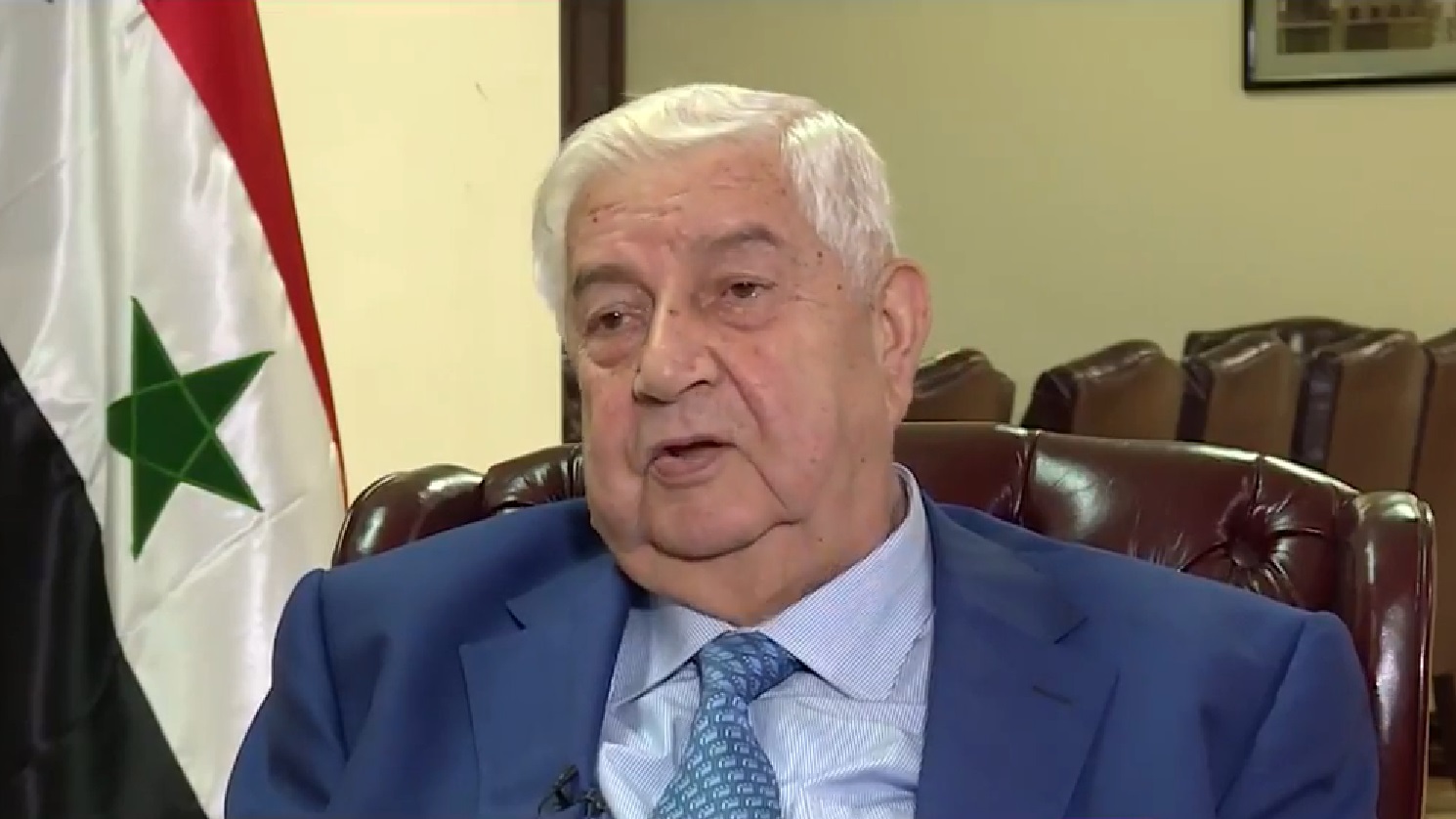 Walid Muallem during the interview, Via RT TV

On September 30, Syria’s Foreign Minister Walid Muallem accused the U.S. of sabotaging the dialogue between the Damascus government and the Syrian Democratic Council (SDC), which began two months ago. Muallem also said the U.S. is responsible for the attack on government forces in the northern city of al-Qamishli on September 8.

“The Syrian people are against secession and the Kurds talk about their rights, some of which are possible … The Americans entered Syria without legitimacy and their presence strengthens the Kurds’ tendency to secede … Washington ruined the talks between Damascus and the SDC and provided military support for it,” Muallem said during an interview with the Russian RT TV network.

Furthermore, Muallem said that the U.S. is gathering and training former members of ISIS at its base near the border area of al-Tanaf in order to send them then to fight against Damascus government forces.

“Washington is attracting ISIS remnants and retraining its militants at the al-Tanaf base to send them to fight Syrian government forces,” Muallem said.

The SDC, which is the political wing of the Syrian Democratic Forces (SDF), voiced its support for a political agreement with the Damascus government and held several meetings with Syrian officials in July. However, the SDC’s shifted its policy when U.S. officials confirmed that the US-led coalition will not withdraw from Syria.

Try the other way around, the SAA sees the US/UK bloc as the main obstacle to employing a military solution against Kurdistan so of course they’ve attempt to sully our name. FYI South Front, the US doesn’t like having a long term commitment either and as you pounted out in the past the Kurds are internally divided in many ways so how could anything Damascus could offer be satisfactory to all of them?

and what do you suggest as a solution to the problem?

For the foreseeable future there isn’t one, the war is virtually over already and things are likely to change much unti the next major upheaval.

do you agree that US/UK and others invaded Syria against its sovereignty, and against international law.Who the hell invited them there?

When You add like that, there never will be any result. You close all debate 100%.

You reduce all in Syria to a military matter. But the uprises came because of much more then that,. None of that is not even tryed to be solved.

Your problem is, You have to give, what never was Yours. Syria is treted like a private proporty of the Baathistas. SAome could understand it could be a fine thing, if it was a great succes. But its not for most parts of the population being in non devellopment mode in non dfevellopment areas.

Thats not even only a kurdish thing. The jihadist support are from the poor people.

OK but this is not the answer to my question. US is not in Syria to solve any problem of the local people, They are there for their interests only.

Yes, but it helps a lot having local support even having different agendas.

It would be very difficúlt for USA and helpers to take terrain as well as Kurds now SDfs could give a good try for local independency.

Your : “do you agree that US/UK and others invaded Syria against its sovereignty, and against international law.Who the hell invited them there?” make no sense to me.

They only went in because ISIS came out of hand. But the number one target untilthen was to removed Assads – remove at least the hard parts of the governess and mix in softer parts(which says reforms for all) or they went in to reduce Assads.

They certainly has reduced Assads. Look at a map. Its also reduced in smashed buildings having the economy in ruins. 500.000 are dead and 11 million arfe not at home.

I compare them with the Cremlin Communists.

So you and Smaug responding like the same trolls. I have to tell you that most of the dead Syrians were killed by the terrorist supported by the west and the Arab countries. As for the the millions of refugees left the country because of the war which is conducted by SAA and the mercenary terrorist, or else the cutthroats. But it was interesting to read how paid pawns of the( US, EU, NATO, Israel and Arab countries, like you feel now that the end is near.

Its Your own private definition. In mine, Ypu are the troll.

As usual, bonehead argumentations, You ignore the reasons for all that killing or are learned to be one big memorylack Ypurself. .

A smarter move would be for Syria to offer assistance to the Kurds in Turkey. Nearly half of Turkey is Kurdish territory, and helping the Kurds cut off a piece of Turkey would be in the interests of Syria Iran and Iraq. A weakened Turkey would actually be in the interests of Russia and Greece as well. The Turks have the same ancestors as the Jews, and nobody likes either, I wonder why?

IIRC, Syrians have supported Kurds in Turkey in some way in the past. It wouldn’t surprise me that Turkey will not vacate the taken Syrian territory.

The Anglo-Zionist cabal will just keep stirring the pot and causing unrest until they learn the hard way.

That goes both ways

The Anglo-Zionist cabal has lost any moral high ground if they ever had it in the Middle East. Their propaganda and false flags have become counter productive and have undermined any chance for US troops to feel any honor or justification in their nefarious actions. More and more the cabal relies on paid merc proxies. The tables are already turning and the days of the petrodollar protection racket are coming to an end. If you want another war to save your fat asses you will be in it.

Do You even believe in that Yourself ?

There is no Anglo-Zionist cabal its the racist supremacist global Jewish confederate slave empire dictatorship.

I think even the kurds ment that when they spoke about it, the SDC in particular. I am speaking about the attack in al-Qamishli.

Well of course, what else would you expect from the Americans?

When they Kurds cannot sell their carpets as the nomads they are, they have to rely on the monthly paycheck from Washington.

Rothschilds have invested $7 trillion to get Syria´s bank. They are not going to give up. $7 trillion more is just pocket money and you pay the price……………………………LOL.