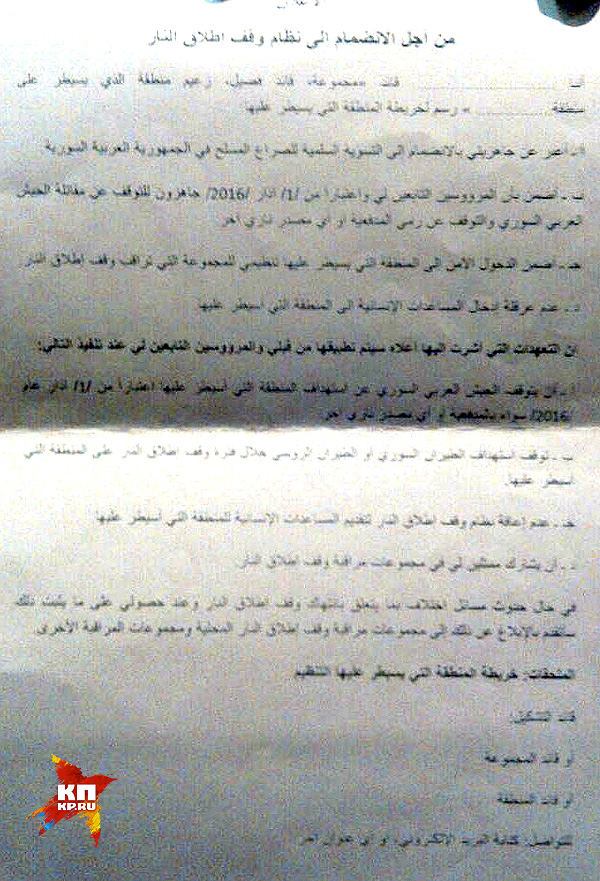 There is a serious effort at reconciliation underway in Syria. The alternative is too terrible to contemplate, because a war until a victorious conclusion could mean a war until the last Syrian is dead. The US threatens a “Plan B”, which entails a division of Syria. The opposition headquarters in Saudi Arabia is trying to coordinate the militants’ actions, but it will appear that much will depend on the kurbashi–the field commanders. Russian army representatives are working with them right now. More and more units, which often amount to irregular banditry, are joining the ceasefire regime.

One of the field commanders from the anti-Assad coalition faxed me the blank document which he has to sign if he is not to be bombed anymore. This is the first time this document, on the basis of which the ceasefire will be launched, is being published.

Application to join the ceasefire regime.

-am ready to join the process of resolving the armed conflict within the Syrian Arab Republic,

-guarantee that my unit will, as of March 1, cease firing on government forces, and will not use either artillery weapons or small arms,

-will permit observers from the control group to monitor the ceasefire

-will allow free access of humanitarian aid for the civilian population

Syrian Arab Republic forces will, as of March 1, cease firing on my unit and, as long as the ceasefire regime is in effect, my unit will not be subjected to Russian and Syrian airstrikes.

Government entities will not interfere with humanitarian aid deliveries into areas controlled by my unit.

The representatives of my unit will take part in the joint ceasefire center activities.

Should disagreements arise, I promise to report them to the joint ceasefire center.

I am attaching a map of my unit disposition.