The new Government of Canada is planning to withdraw its fighter jets from Iraq and Syria. The new Premier Justin Trudeau said that his country wanted to end the combat mission on the US side. 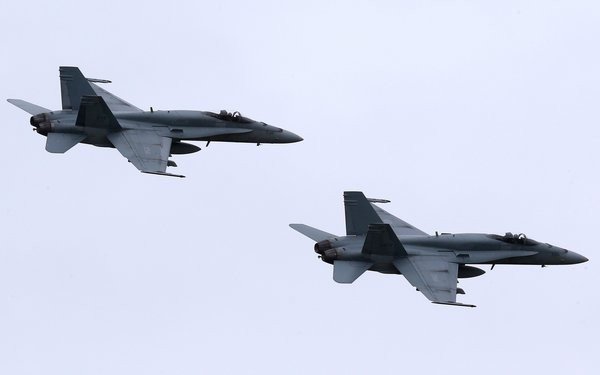 Two Canadian fighter jets of the type F-18 over the NATO base in Romania. Canada draws its fighter jets from Iraq and Syria completely. (Photo: AP)

The new Canadian Prime Minister Justin Trudeau has announced the withdrawal of Canadian fighter jets from Syria and Iraq on Tuesday a few hours after his official election victory; reported AP. Trudeau makes it clear that he wants to break out of US-lead alliance in the Middle East (see video at the beginning of the article).

John Kirby, spokesman for the US State Department, after that said: “This is a decision that must be made by the Canadian representatives of the people, the Canadian people, and its Premier. We have stood with the Canadian armed forces in Iraq and Afghanistan shoulder to shoulder “. The new Canadian Prime Minister added that his country would continue to be “a strong member against the IS”, but without providing combat missions in the Middle East.

Canada began last year to move CF-18 fighter jets to the Middle East. In addition, 70 members of the Special Forces were sent for training the Kurdish Peshmerga in Iraq.

Bravo Canada. Come back to the real World as we in Europe are slowly doing as well.