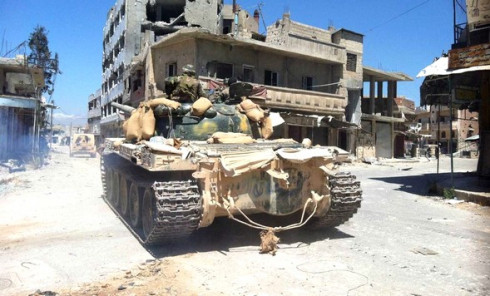 Qusayr in Syria’s central Homs province, after the Syrian army took total control of the town and the surrounding region

The Syria peace process is continuing, though not without difficulties. More and more armed formations are agreeing to abide by the ceasefire terms, their guns falling silent. Thanks to the intermediation of Russian military observers, more than 30 towns in Hama province which were previously opposed to the Assad government, joined the process. All of this clearly shows that the Syrian people are tired of the multi-year civil war and yearns for quiet peaceful life.

But there also exist other parties for whom the ceasefire is not beneficial. Turkey in particular, whose units are assisting various militant groups with training and equipment, as well as helping reach the battlefield. There are five such training camps used by al-Nusra activists along the border with Latakia province alone. Their presence is indicated by a video in which armed al-Nusra militants pose against a captured Syrian T-55 tank that was taken across the border into Turkey.

These facts confirm Turkey’s duplicitous policies and Erdogan’s desire to fan the flames of rebellion in Syria in order to achieve his objectives behind the scenes.

Syrian aircraft killed one of the most infamous ISIS leaders, one Mudallah Al-Rabi’aa (pseudonym Abu Ahmad). Having learned of an ISIS meeting being prepared in Albukamaal in southern Deir-ez-Zor province, SAA leadership directed SAAF to launch a bomb strike against the meeting spot.

Other individuals killed included several high-ranking field commanders and Abu-Ahmad’s associates. He used to head ISIS administration of the city of Mohassan.

Terrorists attempted a new assault against the southern perimeter of Deir-ez-Zor airbase. ISIS conducted a heavy artillery preparation before launching a suicide car bomb attack, which was followed by the general assault.

The car bombs were noticed and destroyed before they reached their targets. Following a mortar barrage, the militants threw themselves at the airbase.

Troops of the 137th Artillery Brigade opened point-blank-range machine-gun fire, so that only 5 militants reached the base perimeter, where they were killed by paratroopers of the reaction force.  One Libyan mercenary was taken prisoner.

In spite of traffic resuming along the Khanasser-Aleppo road, this route remains vulnerable since it passes within a few kilometers of the Maskanah plain. Furthermore, the Tiger Forces commander, Colonel Sukheil al-Hassan, replaced all the local police at the checkpoints with his own people after receiving reports the police were acting in collusion with the terrorists. The police were sent to Aleppo for investigation.

As reported earlier, Russia deployed to Syria one of its most recent inventions, the Zoopark radar, which has been spotted at Hmeimim. This radar, in conjunction with two specially equipped drones, will monitor the ceasefire since it can simultaneously fix the location of dozens of shots being fired from various heavy weapons and provide their coordinates.

The final battle in Latakia’s north-east is underway. Syrian commandos together with naval infantry and the 48th Special Forces Brigade began the liberation of the last major Islamist stronghold, the town of Kabane.

The assault was launched from two sides. From the south the attack is led by the 103rd RG Brigade, and the naval infantry together with the 48th Regiment are attacking from the direction of highway M-4. Once Kabane is liberated, the SAA will have direct access into Idlib province.