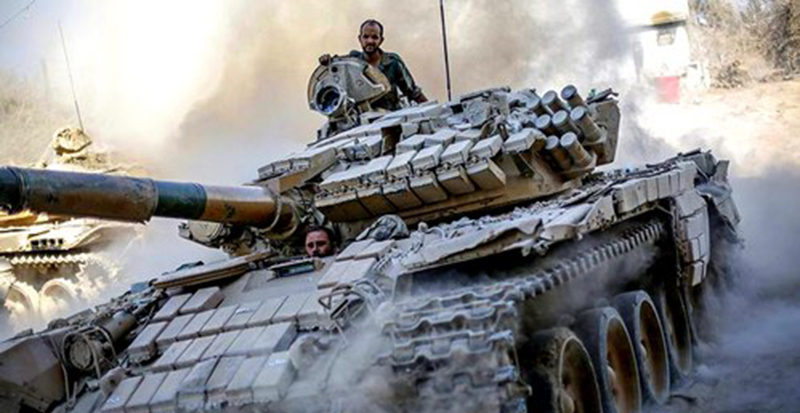 A ceasefire came into effect in Syria after five years of fighting. While some militants occasionally violate it, Syria’s population began to breathe more freely as the amount of shelling has decreased. Over a hundred armed formations agreed to halt operations. On March 7, peace negotiations are to start in Geneva to determine a path toward compromise and discuss the possibility of creating a transitional government.

Ceasefire coordinating HQ began its operations at Hmeimim. All opposition groups desiring to participate in the ceasefire must register with it. The next two weeks ought to prove decisive, as all sides need to reach a consensus.

Russian VKS halted its combat operations due to the ceasefire. It did so to avoid targeting mistakes and subsequent accusations which could undermine the poliical process. The coordinating HQ has compiled a map of so-called “green zones” signifying areas controlled by opposition groups which agreed to participate in the ceasefire. A copy was sent to the US DOD, which in turn shared its available information.

SAA liberated the Marj-al-Sultan airbase, located east of Damascus, two months ago and pushed the enemy out of a sizable part of the region. Since then government forces had only minor successes. Territory around the airbase was cleared of militants to establish a wide security belt.

But that state of affairs does not satisfy the SAA which ordered the Republican Guard’s 102nd Brigade and 416th Regiment to fully liberate Eastern Guta from the Islamists. SAA is supported by National Defense Force (NDF) militias and Palestinian Liberation Army units.

It appears that the attack will be focused on the Tel Ferzat heights and the agricultural college campus. These are the militants’ last strongholds in easern Damascus.

The earlier reports that Tel Ferzat was liberated proved incorrect. SAA only occupied a number of farms.

Commandos of the 103rd Republican Guard Brigade are performing beyond reproach in Latakia’s north-east, where they are operating with naval infantry and volunteer formation support. Nearly whole region is now clear of the militants.

Syrian commandos forced Jabhat al-Nusra and Ahrar ash-Sham off two key heights and approached the border with Turkey which is now only 2km distant. A few more heights remain to be cleared of the Islamists.

Earlier reports that the main supply road to Aleppo was cleared proved premature. Tiger Forces did indeed clear most of the towns along the “road of life”, however it still remains under militant fire.

Tiger Forces with Hezbollah support finally threw ISIS out of Al-Hamam. The commandos entered the village last evening and then forced the militants to abandon it. Militant counter-attack had failed, with the loss of 30 of their comrades. Additional 40 were wounded.

Stubborn fighting against ISIS is ongoing along the Sheikh Hilal–Ithriyah road, which is a secondary supply route into Aleppo. SAA forces received significant air support which struck militant reinforcement columns coming from Hama. It is expected the opening of both routes is only a matter of hours, and then the path to Aleppo will be once again clear.

As always, like what happened to the good Sri Lanka people. The Zionist force a “cease fire” and then use this time to finish consolidating a better attack plan. The SAA was winning, they should have kept going. And Iran needs to provide dozens of better anti-air missiles to protect against Israel and other Zionist threats. Now Mi6 and CIA and Mossad will bring in more advanced weapons, train terrorist better. And formulate more nations to take an active “secret” war against the good Syrian people. The SAA can win by the end of the year, if they keep going till victory. We all know the Terrorist-FSA are going to break the cease fire anyway. At a time and place of their choosing for their own benefit. http://www.english.alahednews.com.lb/

I don’t get it, why Russia/Syria go for CF. Russia should use tactical nukes to eliminate Turkey’s instances / lih nusra/.

That would lack common sense and would trigger a nuclear apocalypse.

Turkey is under agreement with the US, creating a nuclear umbrella.

As far as Russia, they want to destroy ISIS and the Al-Nusra front, while the rebels have to cease hostilities per the agreement. The is a traditional divide and conquer method, where the rebels will be taken out one at a time, making it easier on the Russian/Syrian forces.

Putin would not have agreed if he didn’t had a tactical advantage with the CF. At one hand i have same thoughts as you because i know that much is at stake and victory will have an enormous meaning for the World, at the other hand i’m convinced that Putin knows the Zionist tactics more than anyone in the World. Zionists have introduced their sick strategies so many times, that can be a huge advantage for someone who understands their thinking. What Russia does is well organised and i believe took years of preperation. Russia stepped in on exactly the right moment and did not make one mistake up until know. While he places his move, Putin already has made the next one. He’s the opponent who gives you the feeling that you’ve already lost the fight while you still have to start with the first round. I’m convinced that Syria will win and with that victory the first step to a Zionist free world is a fact. Humanity will still have a long road ahead, many people will still have to suffer under Zionist influence and the defence force who is taking it up against it. This is not a war between religions, this a war between extremism and common sense. We’ll have to be patient and trust in common sense.

You never stop do you. With every neighbour hostile to them, can you really blame Israel for having a hand in this? Disrupting Iran’s influence over the region and their pipeline to Hezbollah, a terrorist organisation that hates Israel and have killed many Westerners? That aren’t even legitimate within Lebanon, they’re like a powerful gang. Iran, with their goal of wiping Israel off the face of the Earth, as if they’re the good guys here? Where women are segregated from men, not even allowed to uncover their heads? Israel is the only democracy in the Middle East, even their Muslims have far more freedoms than any Muslim nation surrounding them. I just saw a poll showing that even with the violence there right now, 2/3s would rather keep the status quo rather than overthrow Israel.

Seeing as how Assad is secular and provided a stable nation for Syria’s minorities, it would have been preferable to not have this whole war going on, ideally in Saudi Arabia or somewhere, but you’re acting like Israel is the big bad guy, that they’re not justified in weakening a long time enemy, one that has attacked them repeatedly, to create an actual friend, someone that doesn’t want to destroy them in the form of Kurdistan. I hope that the West stops funding and arming terrorists but you can’t deny why they’re doing it. Muslims are outbreeding us, their nations have quadrupled in 50 years! Look at what’s going on when they cluster in Europe, as soon as they’re numerous enough, they will seek our destruction, so Western powers understandably want them weakened.