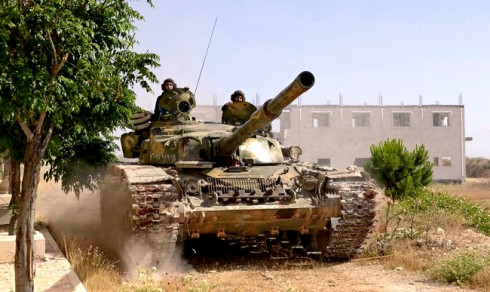 Only two days remain until the official Syria ceasefire between all the warring factions, excepting the terrorists. The main adversaries have different views on this matter, and only time will show how the ceasefire is actually implemented.

So far only Turkey demonstrated an interest in escalating the conflict in Syria. Its Prime Minister Davutoglu said that his country is not bound to observe the ceasefire, and will continue to operate against the Kurds.

Saudi Arabia is apparently adhering to a similar view, since today it was announced that a Saudi aircraft squadron will be relocated to Turkey. Some 30 Saudi military personnel had already arrived at Adana in order to prepare and service the aircraft which are to arrive on Friday.

Russian Aerospace Forces have, in turn, stepped up their operations. Russian aircraft flew 62 sorties and struck 187 targets in Syria. Areas where the warring parties have established an armistice were not subjected to airstrikes. Most of the strikes were launched against Hama, Raqqa, Deir ez-Zor, Aleppo, and Homs. For example, a Su-34 fighter-bomber delivered a precision strike against about 10 defensive strongpoints in the Hama province, killing over 50 terrorists.

In the meantime, Russia and US reached an agreement on establishing “quiet zones” in Syria where all combat operations will cease. Now let’s turn to this day’s main battlefield developments.

Syrian army’s most recent operations in Latakia have brought us closer to the province’s full liberation and establishing complete control over the Syria-Turkey border in this area. In the meantime other battalions of the 103rd Brigade approached Kabani and besieged it. Taking the town will not be easy, as it is located on a commanding height overlooking western Idlib province.

Two days ago, an ISIS formation launched its third large-scale assault against the Deir ez-Zor airbase. Once again, the attack began with suicide attackers’ attempt to break through the south-eastern checkpoint using truck bombs. The assault was detected on time and all vehicles were destroyed.

This was followed by a large terrorist attack. Faced with intense fire, ISIS suffered heavy losses and were forced to retreat, leaving behind dozens of corpses. The killed included the well-known mercenary Abu Sayaf al-Libi (a Libyan) and several less prominent individuals.

In the meantime Russian aircraft struck behind ISIS lines. The main strikes were launched against the Political Bridge, the sugar refinery, and the Abukamaal, Al-Mayadeen, and Aiasha districts, so that the retreating terrorists found their rear-area bases and munitions they contained destroyed.

The main events in this region unfolded around the town of Hanasser which was captured by a surprise terrorist attack which allowed them to cut the Syrian forces in Aleppo main supply route. In order to eliminate this threat, Syrian command transferred the Tiger Force brigade to this sector.

This was a correct move. The elite force that was well prepared by Russian instructors ejected the militants from the high ground and then broke into the town and engaged in street fighting.

The counter-attack also included the other four villages which the terrorists seized on the same night, and which are located close to the strategically important road.

Syrian forces accomplished their mission and reopened the main supply route in 48 hours. Hanasser was retaken after an intense battle, and was fully cleared of the enemy by the next morning.

This was not an easy victory. 58 Syrian troops were killed. They include 11 from Tiger Forces and Republican Guard, 31 soldiers from the 47th Regiment of the 11th Armored Division, 8 fighters from the Jerusalem Brigade, 4 troops from an air defense unit, and 4 militiamen.