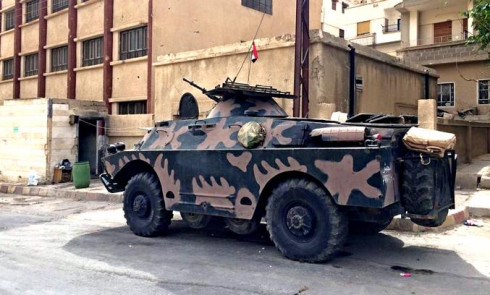 Over a hundred rebel unit commanders agreed to the ceasefire and signed a corresponding agreement. Over 1,000 militants laid down their arms in the Damascus province and have since been relocated from the battlefields.

Field commanders of Mujahideen Khora and El-Furqan formations which operated south of Damascus in the Kafar-Shams district likewise signed ceasefire documents, as did Maamum Shukru al-Habbusa, the leader of Burkan Khoran. This meant 600 more militants laid down their arms.

Two major formations in Deraa province, Armiya al-Ababil and Jaysh al-Yarmuk, agreed to the ceasefire and their leaders signed the declaration forms. This action took 2500 militants off the battlefield.

But there are still frictions. There are still explosions here and there. The Hmeimim coordinating center noted about 20 such violations which were forwarded to the US-led coalition.

Syrian aircraft distributed thousands of leaflets over Eastern Guta in order to persuade the militants to lay down their arms. They also warned of a planned SAA offensive to clear the Army of Islam- and al-Nusra-controlled agricultural college campus.

Islamists are also attempting to recapture the Marj-es-Sultan airbase which is defended by Syrian RG 416th Regiment. The 102nd Brigade is in the meantime preparing to assault the university campus.

In Kalamoun mountains almost on the border with Lebanon, Syrian aircraft destroyed a militant HQ. Targeting information came from Russian advisers, and was verified by reconnaissance flights.

The 103rd RG Brigade is continuing its offensive in Latakia and into Idlib. It is approaching Kabani which is the last obstacle before Jisr al-Shugour, considered to be the “gateway” into Idlib. Government forces broke through enemy defenses near Iqqo.

The 104th Airborne Brigade troops who are defending the surrounded city of Deir-ez-Zor, conducted a successful raid near Al-Hamidiyah where they destroyed an ISIS unit fortified near the Central Park. 32 terrorists were killed and 40 more were wounded. This operation cleared yet another part of the provincial capital. Among the dead were the remains of well-known militants, such as Amir Isma’aeel Al-Harbak and Umar Isma’eel al-Kobissi.

In spite of numerous ISIS breakthrough efforts, SAA is continuing to hold more than half of the city. ISIS is moreover experiencing serious difficulties. A tribal uprising in the city of Abukamaal against ISIS is forcing the terrorist group to send considerable forces there.

Syrian commandos are suppressing militant cells near Khanasser. The situation in the province is generally stable.

SDF forces pushed Syrian al-Qaeda troops further away from the strategic road to Aleppo and took Tal Musharafah after a short fight. The hill is an important link in the militant supply chain as it is located on the al-Kastilyo ring road which was used as a supply route.

In spite of the ceasefire, Syrian militants are continuing to fight and launch counterattacks in order to recapture the strategic position they lost. Russian aircraft carried out a sortie against the attacking militants.

No major ground operations have been conducted here. Russian aircraft are active in clearing the path into Jisr al-Shughour. Some 20 sorties were flown against Jabhat al-Nusra positions in the city’s vicinity.

According to unconfirmed reports in Syrian media, Russian ships in the Mediterranean launched 3 cruise missiles against a terrorist camp near al-Mastouma.

SAA units and NDF detachments engaged al-Nusra forces which infiltrated into the Khorbinefsa district  about 40km from the city of Hama and attacked road checkpoints. 28 militants were killed, dozens were wounded.

Syrian aircraft launched airstrikes against terrorist camps, including an ISIS camp in Al-Karyaten. Several armored vehicles, fortified positions, and a HQ were destroyed.

great news !! keep up the good work everyone :