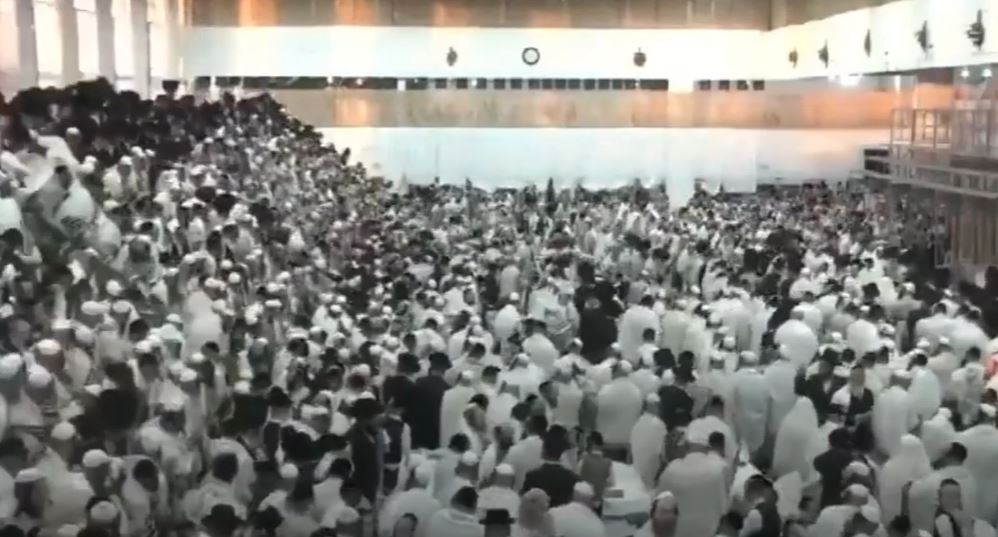 Screen grab from one of the videos of the accident.

On May 16, at least two people were killed and more than 150 others were wounded when a bleacher collapsed at an uncompleted synagogue in Givat Zeev just outside of Jerusalem in the West Bank.

The bleacher was packed with ultra-Orthodox worshippers who were praying at the beginning of Shavuot. Videos of the accident surfaced online.

The Israeli military, that’s currently carrying out a major operation against Palestinian factions in the Gaza Strip, said in an official statement that it had dispatched medics and other search and rescue troops to assist at the scene. Some of the wounded were airlifted in military helicopters.

The mayor of Givat Zeev held the Israeli Police responsible. According to him, the police ignored previous calls to take action and evict the building because it was uncompleted and dangerous. Nevertheless, Jerusalem Police chief Doron Turgeman said that negligence was behind the accident, adding that arrests will likely be carried out.

The Givat Zeev accident comes after a stampede at a religious festival in northern Israel that killed 45 ultra-Orthodox Jews. The accident, which took place on April 29, was the deadliest civilian disaster in the history of Israel.

The deadly accident will likely place more pressure on Prime Minister Benjamin Netanyahu, who is struggling to stay in power while embarking on a military operation in Gaza. A few hours after the accident in Givat Zeev, the death toll from Israeli strikes on the Palestinian enclave reached 209. At least 55 of the casualties are children.

The word synagogue used to mean “a place to commit wicked acts”, until the grammar corporate Zionazi globalists changed the language. Just like with the current postmodern “critical theory” trends of liberal “diversity” owed to their machinations on “antisemitism”.

Even “antiglobalist” Putin made “Holocaust” denial a crime, just like the Western Ziocorporate terrorists, by conflating it with the Great Patriotic War, while the Rothschild neocolony keeps massmurdering Palestinians, Christian and Muslims alike.

Putin’s been a magnificent ally for the Russian Zioligarchy, and a more or less good leader for Russia’s general population.

For globalist figures like Netanyahu, Navalny would find it impossible to make a better business partner than Putin.

Russia is now the main protector of Zionists and China now has to step in to protect Palestinian rights as it along with Norway organized the last UNSC meeting. Russia is a two bit player anyway and that message is not lost on the Arabs or the world in general.

Making ” Holocaust ” a denial crime Putin demonstrate his anti- Ziocorporate- globalism” . Here in west eurasia is a crime to pronounce that word : 5 years jail for ” antisemitism ” . In fact nazists decided it was time to go ahead as usually , at least in the last 2 centuries , they often do when the times are ready for an advancement of their conqueror’ s agenda : now that there aren’t anymore any revisionists around ( now that 90% of the population in brainwashed about it – and not only about it ….! ) it was time ( some years ago ) to impose the new word everybody HAS to use . Shoa is the new and the only word they are allowed to use . It’ s very clear and logic ! Holocaust means ” sacrifice , shoa means ” tragedy ” . Sacrifice needs a subject while a tragedy is something that happens without any will , any plan !

Criminalizing the use of ” holocaust ” zionists are making an operation of delating their own guilt : if nobody in the future will speak of a sacrifice nobody will ever think somebody committed it !

On the contrary we know very well zionists created nazism and leaded it and killed voluntarily the jews they choosed with attention as told soros the famous nazist antifascist , that’ s to say zionist , so beloved from leftists and antifascists ( everybody knows antifascist leftists are all nazi ‘s asses lickers … ). So , now the paradigme changed , is useful to accept the old propaganda . The jews killed were not 6 millions but 60 millions ! More jews were killed by zionism /nazism the more zionists are regettable and criminal and desrving to be executed by a Norimberga trial . Putin is a genius .

Why didn’t the finish the job?

More good news coming out of that Den of Thieves and Snakes!!!!

Thank you, all merciful one! Holiest in the Highest for this divine act of mercy upon the human race!

GOD IS COMING FOR THEM.

2 zio terrorist children of lucifer departed to hell.. Lucifer awaits them all.

This is a disaster and some piece of shit politicized it

Fog of War
Reply to  Asterix

yes it is a disater. It was only one small section that collapsed . Pity the whole f ing lot didn’t crush the lot of scum there, then it would have been celebration time again.

I want to watch it in slow motion on repeat that will be sooo good. Goooing doown again

Darwin’s Theory of Evolution at work …

Since Jesus, the Jews have been cursed by him…. the children of demons, usurpers, pigs, dogs, devils, liars, father of all lies, snakes, brood of vipers, murderers and so on.

Jesus was a rebel not a god or prophet

You don’t know what you’re saying

i didnt knew that cows could talk

And your mother came right of Satan’s ass and give birth to you.

You wouldn’t know Jesus the jew from Jesus the Mexican, so shut your stupid piehole and go fish your relatives out of the river.

The Zionist criminal child killers are reaping KARMA is double doses, first the cowardly losers could not even fight Hamas like men and bombed women, children and media and the rockets keep coming. After this abject humiliation, who will ever take the Zionist loser parasites seriously.

If GOD wanted the Jews in Palestine he would not THROW THEM OUT everytime they go there.

Something similar just happened weeks ago in Israel – a crowd of fundamentalist Orthodox Jews trampled their own resulting in fatalities. It was event with large numbers – described as very poorly organized and condemned as unwise in middle of pandemic lock-down. Seems whilst the Israeli government remains in flux and Netanyahu needs the ongoing Orthodox factional support, the latter are increasingly ignoring police and state safety procedures for their public events.

Probably a sabotage. But not Palestinians.

Another wild party in synagogue!