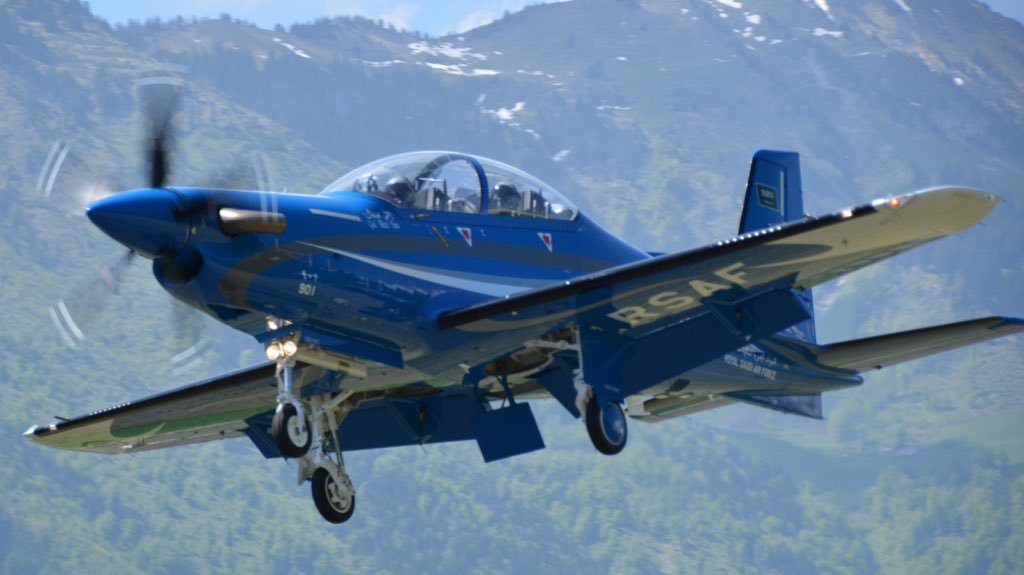 On June 26, Switzerland’s Directorate of Political Affairs at the Federal Department of Foreign Affairs (FDFA) issued a ban on services provided by Pilatus Aircraft Ltd in Saudi Arabia and the United Arab Emirates (UAE).

“The Directorate of Political Affairs has reviewed the services supplied by Pilatus Aircraft in Saudi Arabia, Qatar, the United Arab Emirates and Jordan, which include technical support, replacement parts management and rectifying faults affecting the Pilatus PC-21 aircraft. These services qualify as logistical support for armed forces and must therefore be declared in accordance with the Federal Act on Private Security Services Provided Abroad (PSSA).

Having investigated the matter carefully, the Directorate of Political Affairs has concluded that support services supplied by Pilatus Aircraft to the armed forces of Saudi Arabia and the United Arab Emirates are in breach of Article 1 para b of the PSSA, as they are incompatible with the federal government’s foreign policy objectives. The FDFA has therefore called for these services to be discontinued.

Pilatus Aircraft now has 90 days to pull out of Saudi Arabia and the United Arab Emirates. However, the FDFA saw no grounds for prohibiting the company’s activities in the service of the armed forces in Qatar and Jordan,” the FDFA said.

The Swiss Foreign Ministry said it had gathered “sufficient evidence” that Pilatus failed to declare activities backing foreign militaries, as required by Swiss law. The ministry has reported the shortcomings to the nation’s attorney general for further investigation.

In 2017, Pilatus signed a contract with Saudi Arabia to support a fleet of PC-21 turboprop planes operated by the Royal Saudi Air Force. Earlier, the company delivered 55 PC-21 planes to Saudi Arabia and 25 more to the UAE. These armed planes were later used by the Saudi-led coalition to strike targets in Yemen and support its proxies combating the local forces resisting to the invasion: Ansar Allah (the Houthis) and detachments of the Yemeni Armed Forces loyal to the Sanaa-based Yemeni government.

By the decision to ban Pilatus from supporting the UAE and Saudi Arabia, the Swiss government demonstrated that it sees the  Saudi-led invasion of Yemen as an illegal act. In fact, actions of the Saudi-led coalition in the country caused a broad humanitarian crisis and thousands civilian casualties.

Oh very good, but I know it and the Swiss know that it is too late now.

JustPassingThrough
Reply to  You can call me Al

You can call me Al
Reply to  JustPassingThrough

hmm, I don’t know now nor what we were talking about.

It Is not too late. The Swiss government can afford 100 plane loads of food and medicine. That might even inspire Germany to do likewise.

Trump ended deal. Now there would be no deal of Iran with idiots.

If Trump is playing with Uranium, Plotonium, nuclear weapons and have used on Japani cities then Iran cannot trust America and has full right to develop these nukes for their own national security. I think an idiot will be careless and will compromise on their national security as Iran did it before.

Well done Switzerland. Now to be really ethical send in 100 plane loads of food and medical. There are still 14 million Houthi starving. Live up to your flag.

while you are on the website check out the other campaigns that swiss people are involved in.

how is your country doing? how are you doing?

Ok, but don’t praise Switzerland too much: they’re intruducing more and more laws prohibiting certain garments (not blue jeans…) and forcing youngsters to shake hands even if they don’t want to…

Wake me up when Switzerland place a ban on Israel.

You just wait. Israel will dismantle itself in 2019. UK has created Israel and assisted by America to have access to the oil and gas rich Middle East.

Yeah ill wait. Doubt Europeans will have anything to do with the Israeli regime disappearing. In fact, Europe has actively supported them and their existence in Occupied Palestine.

But now everything rapidly changing. Before there was nobody to talk against Netanyahu and now most of the world Europe, Asia and Africa openly talk against Israel. This is due to internet. Now in Israel there is no government.

there is a number of european countries that ought to do the same, like sweden and finland und zu weiter but on the other hand, switzerland most likely has mohammed bin salman’s (of fake leonaro da vinci fame) private stash stashed away in some impenetrable vaults deep in a cavern so there is still money to be made out of saudi for the swiss.

Switzerland will never be poor as long as they allow the World Bank to stash their gold there. The World Bank/IMF and Vatican (much of the gold is from Vatican) will make sure of that. This is the reason that Swiss economy will always outperform anyone else. Cheese and watches will never do that.