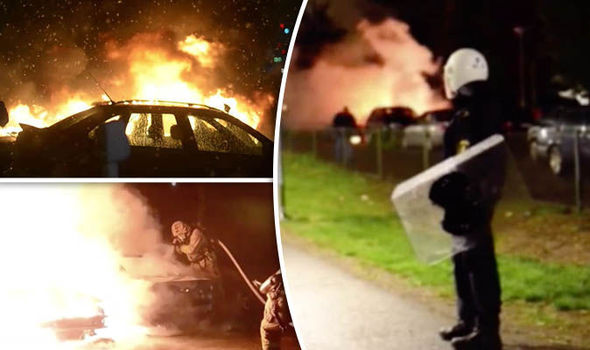 A representative of the Sweden Democrats has said soldiers should be sent to Malmo to reestablish law and order in the third largest Sweden city (source):

Launching a seething attack on the red-green parties in Malmo, Magnus Olsson said it was time to call in the military to end the surge in violent crimes that have been sweeping the city.

Painting a blake picture of Sweden’s third largest city, the opposition politician blasted Malmo has lost enough of its citizens to shootouts, grenade attacks and murders.

Speaking to Expressen, Mr Olsson also said there was a great lack of police officers in Sweden, which means officers could benefit from the armed forces’ resources.

He said: “There is a great lack of police officers in Sweden and Malmö. For this reason, it is perhaps time to let the military and police to stand together to reestablish order in the country.

“We absolutely don’t believe the military should go in and to the police’s job.

“However in times of crisis the military can help keep law and order and assist the police with logistics services, materials, vehicles, and more.”

The city is struggling to cope with mass crime and vandalism. It’s described as a “lawless city” and a “battlefield” as the surge in crime continues.

Over 40% of Malmo’s  population is muslim migrants from Iraq and Bosnia. In general, the situation in Malmo is a bigger example of Cologne-style events when police ingores or does not have enough resources to stop mobs, terrorizing the law-abiding citizens.

If you listen to current politicians it will only get worse/ REPLACE THEM!!!

If anyone listens to you the whole countries will implode. YOU SHOULD BE REPLACED!

They should deport all the useless medieval parasites. They contribute nothing except hate.

I suppose I will get nothing but love from the religion of peace. It is hate from that quarter that will see Sweden back to the dark ages. I take it you have vested interests in conquest of the west.

You mean the rightists?

Is that what that witch Spector (or whatever her name is) is talking about? Making Europe multi-cultural?

The military needs to take over the government first. Then, mass deportations of all Muslims.

The Muslims need to take over your organizations, deport you and before that kick your ass!

I’m with Lord humongous. Your langugue is hate filled.

No the language of Lord humongous and you is hate-filled.

Anytime, anyplace goat humper. Face to face even better so I can look you in the eye while I choke you out.

Really? What have we done? We Tajiks have fought terrorism in our country too. Or do you really think as per stereotypes that all Tajiks are just corrupt. Humping goats? That’s what Americans do in their stables. You want to choke me huh? Humping littlr boys? That’s illegal here idiot and we don’t indulge in such kind of practices. You Christians do, as all of your churches are full with such kind. Guess your clerics are lonely. Fucking nudie Christcocksucker, the only goat phucker is your Christ who “strokes” goat. You not only phuck animals but your whole families. All you can do is yap. Chocke me out? I’ll grab you by the hair and shorn you. After that, I am going to rip your entire skin out,all the while you’re never going to die. So come on do whatever you can little crapeater! Because you’re going to become a blind mule after that.

The fate of a defeated race is slavery, and death. The Swedes are receiving what they so richly deserve.

40% of the population and they get to take over a whole city . The politicians there have absolutely no common sense .

This scenario is exactly what the Swedes were worrying about in the early 90s, the next step in their dooms-day scenario was proclamation of the Islamic republic in the south. No one obviously has taken those predictions as serious, or perhaps their politicians were working towards this all this time?

What is this stupid anti-Muslim lies? According to the source, Magnus Olsson was only calling for a control on crime. Not blaming it on any groups or anybody in particular. It is sickening that these lying Russian and rightist coalition spreads lies of no-go zones by blaming all crime on then. What’s more, this website is lying that 40% of the city’s population are Muslim migrants from Iraq or Bosnia. They only account for 17,000+. (http://malmo.se/download/18.476cfe0814d2ef3bd184fa2c/1433138294120/Malm%C3%B6bor+f%C3%B6dda+i+utlandet.pdf) Not to mention Serbians, Danes and poles also have significant numbers. This article is a lie perpetuated by LSM lyingstreammedia like SouthFront to spread hate and tension against Muslims and use it for political purposes.

Your hatred blinds you. You’re a mad little monkey.

My hatred doesn’t blind me. But if I am a mad little monkey, I surely hope to infect you with rabies one day!

Your very evil in your speaking again ….. who says things like this ???? Yep , EVIL People !