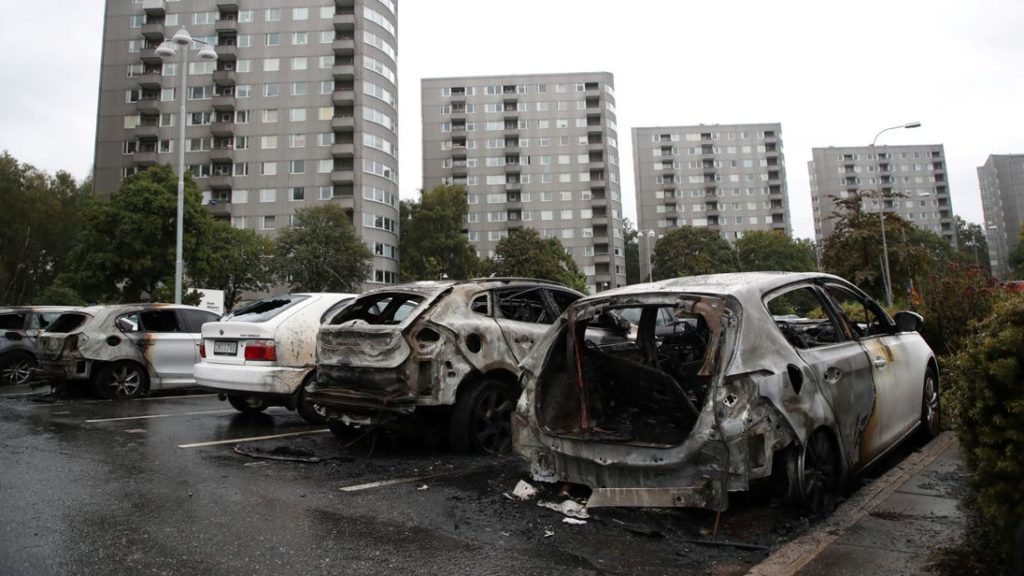 On August 13th, cars were fire-bombed in car-parks by masked youths in what seemed as a coordinated gang attack in Sweden’s Malmö, Gothenburg and Helsinborg.

It is not known if whether the attacks are linked, however they happened at around the same time in the three cities, as reported by the Metro. About 80 vehicles were destroyed in the fires, including a truck and three caravans.

There is footage that shows the fires burning in a shopping centre and hospital car park at Frölunda Torg in the west of the country, both near Gothenburg. In the shopping centre – Trollhattan, approximately 40 people could be seen starting fires and throwing stones at the car park.

Other fires were reported in Hjällbo, north-east of Gothenburg, and around 40 firefighters were called out to deal with the multiple fires.

Police announced that all the fires had been put out by midnight and that they are investigating who is behind the attacks and if the attacks across the country were related and coordinated. It is still not clear if any arrests have been made.

Sweden has seen an increase in violence in the areas that have high unemployment and other social problems, with the disturbances on Monday mirroring those of the 2013 protests in Stockholm, as reported by Reuters. It is however unclear what is the cause behind the attack.

Reuters cited the police which have said that up to 100 cars were set fire or vandalized in Gothenburg, Sweden’s second-biggest city, and in nearby towns such as Trollhattan, an industrial area with high unemployment, and Falkenberg. “We believe that up to 100 cars have been burned or damaged. They were organized and prepared,” police spokeswoman Ulla Brehm said.

There is also a tendency for small-scale violence in mid-August in recent years around the end of the summer break, as reported by Reuters.

“It seems very organized, almost like a military operation. Society is always going to react strongly to this kind of thing,” Prime Minister Stefan Lofven said in an interview on Swedish radio but did not say who might have organized the violence.

In their article regarding the attacks, ZeroHedge claimed that the attacks were organized by migrant gangs, something that has not been confirmed. ZeroHedge further elaborated that resentment has built in Sweden, after the influx of over 600,000 immigrants over the last five years, which led to a significant increase in crime rates, gang violence, complaints about education, and even pregnant mothers being turned away from maternity awards due to a lack of capacity.

On top of the attacks of August 13th, Sweden has seen a tendency of increasing violence. ZeroHedge cited a Reuters report that dozens of people have been killed in the past two years in attacks in Stockholm and other big cities by gangs that are mostly from run-down suburbs dominated by immigrants.

This attack comes just three weeks before the Swedish general election. The Swedish citizens will vote for Parliament on September 9th.

Lofven’s Social Democrats, the bigger party in the minority coalition, according to opinion polls, are on track for the worst election result ever. People’s concerns related to crime, the creaking welfare system, the falling school results and the surge of immigration have benefited the populist, anti-immigration Sweden Democrats party, who could possibly become the second biggest party in parliament after the vote. As reported by ZeroHedge, Sweden Democrats is an ironically named party with neo-Nazi roots that wants to freeze immigration and to hold a referendum on Sweden’s membership of the European Union. Their opposition has attempted to take a harsher approach to crime and immigration, however so far they have reportedly not been able to counter the anti-immigrant party.

Probably meeting with his claims adjuster about his destroyed auto.

The men in white coats wouldn’t let him out . .

Well, if this is the way you want it? Well, you’l get it! Cogratulations for swedish childish dream. I’m waiting as horrified as finnish goverment is making all those mistakes as our western neighbour. We are still lagging 20 years behind, but still on the road to hell. Mixing up people from Mid East or Africa with Europeans has not been succesfull in any European country and it newer will!

What remains unsaid is that those masked vandals are most likely to be Moslem trash ,most likely Turkish. The last organised gang-trashing in a country done i remember was in Germany by Turkish mutts. All wearing the same tshirts and flying the same flags. Hmm?

I doubt they are Turkish as they are all the new gimps; the Turks cane on mass long before the recent lot.

Paul Cock
Reply to  You can call me Al

Look at the face of politically correct stupidity. When will Europe get writ of this lot, especially the treacherous social democrats.

Yes the Main wave of Turks did come through long ago. I only say Turks as Erdogan did use the German Turks for political purposes ie rampaging through German cities in a concerted fashion only a few years ago. He is also now under pressure once again.

Second and third generation Moroccan/Tunisian/Algerian have done this car burning behavior in France since 1990’s – in Sweden likely be from recent influx of Iraqi/Syrian/Afghan/Somali immigrants. But of course the current Swedish political leadership’s extreme politically correct policing policy is to not document or profile the ethnicity of such offenders – let alone publish the data. That is an ideologically driven act of irresponsibility – as it gives the current police and future policy makers no credible data legacy to operate from, or draw realistic conclusions. Never trust an hard-line ideologue.

as
Reply to  Aimo Huikka

The real question is Are they armed ? Where they get their arms ? Did they break the law ? Why aren’t you upholding your state law ?

Be they fellow anglo white Swedish, Muslims, negeoes, latino, etc if they break the law you may and should punished them accordingly with the laws.

Just making like home! Ridden with violence and crime.

Defend themselves? No, that would be racist.

You beloved false “refugees” say “Hello” to you…you bunch of ret*rded Scandinavian id*ots ! It took only to verify France that is under your nose to see what is coming to you ! You bl*ody CULTURAL MARXISTS and AUTO-CHAUVINISTS !!!

Remember, it’s not an organized invasion, it’s a budding social movement emerging organically in response to the oppressive plight of the refugees in their new territories.

It’s not an organized invasion.

It’s not an organized invasion…

This whole immigrant invasion was sponsored and facilitated by the YKW (you know who) . .they even boasted about it …

Must have been all those violent blonde, blue-eyed Vikings… couldn’t have been anyone else. I propose more African and Islamic immigration to replace them.

Truly, Sweden must be a humanitarian supper power, importing his own destruction and rape. How stupid can you be Swedes.

“Youths….” Pff. Were they Arabs or Negroes?

Well, Sweden, we see how this “cultural diversity” is now working so well..

Time to send all of these freaking illegal migrant workers and criminals back to the sewers they came from!

As in reality no one knows who is doing this, isn’t this strange that it was a coordinated effort. Gee, almost military like in execution. Has to be the migrants, right? They are known for their military-like precision, huh? This surely couldn’t be someone is whispering Gladio, Gladio in someones ear, could it? The conditions are right, the US needs to sell them defense units, unpopular ‘invasion’ of Muslims and MSM blathering wildly about Russian thugs. Nah, it’s all as portrayed, no thinking needed…you know like all the terror attacks in the US and Europe. It’s the Muzzies, here to destroy countries because they hate our ‘freedom’. Works every time.

„Some other social problems“…