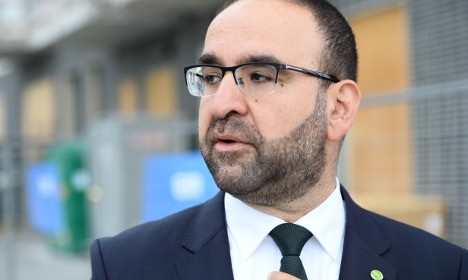 Several media outlets reported the resignation by Sweden’s Minister of Housing and Information Technology Mehmet Kaplan (pictured above), a member of Sweden’s Green Party (!) which is currently part of the ruling coalition with the Social Democrats. The resignation was requested by Sweden’s Prime Minister after Kaplan was reported to have lunch last year with members and senior leaders of Turkey’s Grey Wolves organization, such as Barbaros Leylani and Ilhan Senturk.  Moreover, Leylani was recently seen exhorting Turks in downtown Stockholm to “wake up” and “slaughter those Armenian dogs.” According to Dagens Nyheter newspaper, Leylani also said “Let us show Sweden, Scandinavia and Europe what Turkey stands for. We do not like blood, but we can let the blood flow when it is needed.”

This is not the first such incident involving Kaplan. In 2014 Kaplan caused a minor controversy when he compared Swedish jihadists fighting in Syria to the Swedish volunteers who fought in Finland during World War II on the side of the Axis. Not that the comparison is inaccurate: in both cases, we are dealing with radical extremists whose existence is tolerated as long as they vent their rage against Russia. Though it is is comment comparing Israeli treatment of Palestinians to the German treatment of the Jews that was decisive in having him fired.

It would appear that Kaplan’s main transgression is actually his lack of discretion. As far as politically correct Sweden is concerned, it is perfectly fine to dispatch jihadis to Syria, it is just not acceptable to discuss these facts in public or, worse criticize Israel. In his capacity as the Minister of Public Housing, Kaplan’s responsibilities included public housing projects which, as in many other European countries, feature heavy concentrations of radicalized Muslim youths. It is highly likely that Kaplan was not merely engaging in glorifying jihad but was in fact a recruiter for jihadists groups in Syria–his meetings with Grey Wolves were probably not mere socializing. From the Swedish perspective, the export of jihadis to Syria serves two purposes: it rids the countries of very real troublemakers and potential terrorists, and furthers the interests of NATO, which is consistent with Sweden’s long tradition of feigned neutrality, including in World War 2. Kaplan’s forced resignation also allows the government to move on without having to open an investigation into these recruitment activities which are probably continuing under the new, less conspicuous and scandal-prone, leadership.

I would throw his fucking ass on a one way trip to Istanbul.