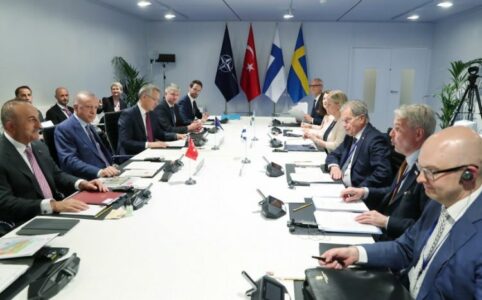 The Swedish government announced Thursday that it has decided to extradite a man to Turkey who is wanted for fraud, a move that comes after Sweden and Finland signed a deal with Ankara to cooperate on extradition to join NATO.

After signing the deal and lifting its objection to the Nordic nations joining NATO, Turkey submitted a list of dozens of suspected “terrorists” that it wants to be extradited, including suspected members of the Kurdish militant group PKK.

But the man Sweden announced its extraditing does not appear to be linked to the PKK, although he was on the list of names Turkey handed to Stockholm, according to the Swedish broadcaster SVT. The man, a Turkish citizen, had been sentenced to 14 years in prison in Turkey for credit card fraud but has been detained in Sweden for the past year.

The Turkish man argued to the Swedish Supreme Court that he was wrongfully convicted in Turkey because he converted to Christianity, refused military service, and has Kurdish heritage. But the Supreme Court decided to go through with the extradition.

“This is a normal, routine matter … The supreme court has examined the issue, as usual, and concluded that there are no obstacles to extradition,” said Swedish Justice Minister Morgan Johansson.

Turkey has been frustrated with the lack of progress on extradition and has warned the Turkish Parliament could still block Sweden and Finland from joining NATO. It’s not yet clear if the Swedish government will agree to extradite suspected PKK members as it is under intense domestic pressure not to do so.

Welcome in nato all brothers from finland and sweden. Russobots will cry and bark. Kazakhstan and azabajan are next to be nato members :) enjoy

No future in dumbed up,low iq degenerate nazo poofs like you who aint got a clue about the realm! Enjoy your lieing fukfest and remmember you are losing on all fronts,lock,stock and all barrels,gimp!

You answer Hans Rauss, but he is censored away in the best SF style.

If you want to avoid being censored, you have to express yourself about homosexual variants or engage in spam advertising.

Turks should have demanded a bigger ransom in exchange of its approval of NATO’S expansion knowing the desperation of these decadent perverts, like the long dreamed inclusion in EU perhaps and visa-free travel into US.

Even if that were to be the case,big if that would require many dozens of more gulen fags to fullfill turkeys demands!Me thinks keep on barking on nocando nazo gayee nothing burgers of this century!

I have to admit that Turkey is playing the game a lot better than Europe. Everytime Erdogan’s ass itches, some european ””leader”” stands ready to kiss and lick it clean.

Turkey has teeths and eats flesh meat like no other European country. You can argue it its because they are Muslims and muslims wont surrender to not muslims without a bloody fight. Turkey owns the second largest military in NATO and acts like an armed fortress to contain Russia in the Black Sea… so Turkey can take anything they want from NATO and also buy S400 from Russia.

In April 2021, Italian PM (who has never ever competed in any elections but was put there by “our” Presidente della Repubblica) called Erdogan “a dictator, one that we need” causing some problems with Turkey. One year later, when a journalist asked him if it was “fair” to betray Kurds in order to have Sweden and Finland in NATO, he firstly went away, then got back and said: “Ask Sweden and Finland”.

This is the West: they betray, accept dictatorships and any kind of violations as long as who committs all this is an “ally”. The retard Italian government has asked Azerbaijan to sell us more oil. Azerbaijan, the fucking terrorist state that is bombing Armenia every once in a while with EU and other morons doing nothing about it.

Hey, NATO…get used to it… Bend over Sweden, you’re gonna like this.

This is the proof that Sweden negotiate with Turkey to transfer all turkish citizens wanted by TK Goverment prior to join to NATO… Guess THE EUROPEAN Front is finished by USA, but the PIVOT to ASIA Strategy of OBUMBA the African USA POTUS could not be achieved anymore in year 2022 nor BIDEN era ASIAN Countries all full AWAKE of USA truth intentions to keep Controlling the Region and using countries like Cannonfodder just like Ukraine in Europe. Its a shame to EUROPE because they willingly would die like cannonfodder just protect their Masters of USA.

european governments would die like cannon fodder, the majority of people wouldn’t. The few who are ready to it are the usual neonazis and globalists who think US is the best place on Earth (but protests against their governments if they are not funded).

Will see if Erdogan is stupid. Sweden wants Turkey to let them in NATO first then they will send them the men they want. If Turkey does just watch Sweden tell them they have to go through the courts first and if the Swedish courts say no (they will) then Turkey doesn’t get them!

Sweden extradites man to certain death in exchange for nato membership. Sweden will be doing a lot more of this when they become a full member. It won’t be called extradition, but conscription. A sacrifice to the new colonialist policies of the NWO.