On May 6, Obretix, a defense observer on Twitter, shared satellite images of what appears to be Mirage 2000-9 warplanes of the UAE Air Force (UAEF) in Egypt’s Sidi Barrani Air Base.

The images show six Mirage-type warplanes with a color scheme identical to that used by the UAEAF in the Egyptian air base. The Egyptian Air Force (EAF) also operates Mirage 2000 warplanes. However, in different colors schemes.

The Sidi Barrani Air Base is located less than 90 km away from the border with Libya. The UAE may have deployed its warplanes there to support the operations of its ally, the Libyan National Army (LNA).

The UAEAF has been operating in Libya for more than three years now. Several CAIG Wing Loong II unmanned combat aerial vehicles (UCAVs) and IOMAX AT-802i BPA light attack and recommission warplanes of the UAEAF are deployed in air bases within Libya. While it is very possible that the UAE is planning to up its intervention in Libya, the deployment of the warplanes could be related to other issues. The UAEAF Mirages may have been sent to Egypt to take part in a military exercise, or to be evaluated by the EAF which was reportedly interested in purchasing them.

hopefully they will be used to pound GNA even harder

Pigs will fly too.

Dumbo can fly ..so pigs can fly too

later .. I’m with your mamaa having breakfast at the moment.

So, I say it in the morning you say it in the evening, not too bad, you are learning …like your turko-paki pilots are learning how to fly with the free lessons provided by the HAF (AKA The guys that rule the Aegean sea and kick kebap ass).
Vromiko kebap ass! Poly vromiko like your poutana mana, poutana adelfi kai pousti patera!

Google that re malaka shit-kebap!

Οh so you have a Greek boyfriend that fucks you up the bumhole!

You dirty memetako … hahahaha
You like to play the field don’t you…one night at the Kurds house one night at Assad’s boys, one night at Haftar’s but your favoutite d1ck remains Andrea’s the Greek’s d1ck !

Be careful Erdogan will destroy your blind ugly mom.

Greece another Orthodox nation has restored full ties, including military cooperation with Syrian Arab Republic and its leader Dr. Bashar al Assad. Now Greece will join Russia, Armenia, Serbia and rest of the Orthodoxy in supporting the full territorial integrity of Syria and the expulsion of Turkish invaders and sponsors of terrorism.

Hairy Monkey-Cow Erdogan must go, and he will soon !
Long live Assad ! Respect to Syria

There is no UAE airforce, the illiterate Bedouins have a hard time flying a kite on a windy day. It is Bakistani (the fuckers can’t even pronounce P) mercenaries that fly the Mirages that are most based at PAF base Masroor as the French cunts were ripping off the Bedouins by charging $2 billion a year for servicing the Mirage 2000 junk as the 2000 SNECMA M53-P2 turbofan engines have a high rate of flame out as the The air intakes are fitted with an adjustable half-cone-shaped center body, which provides an inclined shock of air pressure for moreefficient air input but tends to fail in rapid thrust or desert environments. The Qataris had the same problems and lost a few in Yemen and then called it quits. The Mirage 5 was a total failure and are now mostly phased out. I have flown the Mirage V-DPA and it was not a very capable or stable platform. The Mirage 2000 the UAE arseholes have sent to Egypt are basically supercharged Mirage III and not a bad aircraft in the hands of skilled pilots.

The Mirage III had similar issues, the F1-EQ2 has better aerodynamics and are more reliable. Iran inherited 24 of the most advanced ones from the moron Saddam and were later overhauled at PAF complex Kamra and now based at Birjand and operated from 10th Tactical Air Base, Konarak akaKangan aka Chah Bahar (OIZC). French engines are very expensive to maintain and not very reliable. As you can see the Iranian F1 have brand new engines and updated avionics and HUD. 1 x SNECMA Atar 9K-50 afterburning turbojet engine develops 15,785lb of thrust is more reliable. The Iranian Mirages are expected to fly until 2035 with these major upgrades. 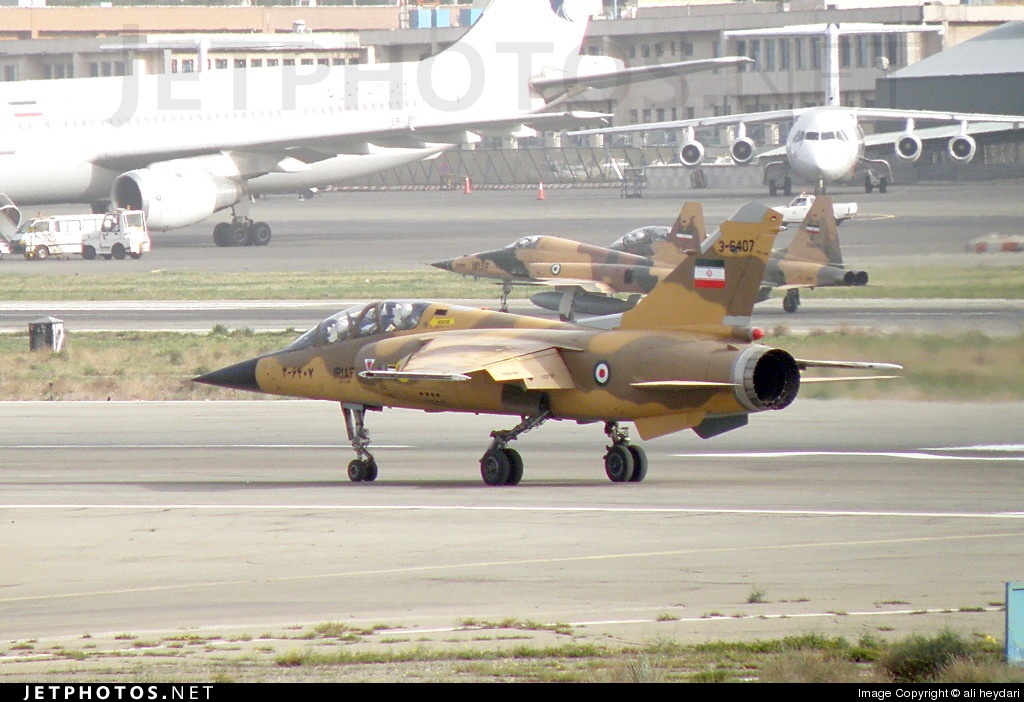 Thank you very much for the details. I flew a long time ago. I was afraid the Iranians were stuck with F-5;s which are essentially aerial targets these days.

You are welcome, from one old stick jockey to another :) Iranian F-14A Persian Cats are still very good and all have been upgraded. Pound of thrust per thrust, perhaps the best in the region or ever built. The MIG 29 are at SMT standard and the F-4E are being phased out with Chinese J-10 and perhaps J11 which is upgraded Flanker. The F-5E have different hybrid versions like latest Kowsar, Azarkash, Saeqeh 2 etc. They are better than the old F-5E from Northrup but still an old plane.Iranian pilots are perhaps the best in the world for what they have had to live with and still managed quite well.

The illegal arms embargo against Iran is ending soon and many sellers are lining to do business. China and Russia will be in the drivers seat.

Thanks for the videos!

The only fucking illiterate is you, you racist piece of shit. Libyan Pilots are heroes and professionals using the oldest of technologies and fighter jets and still hitting the enemy hard. Look at this video you ignorant un-educated piece of shit, a Libyan Pilot

iran has developed an advanced anti-missile system far superior to the pitiful trash possessed by the USA and Israel, believed to be similar if not superior to the Russian s300…the cowardly Israelis use Lebanese airspace to to murder Syrian grains of sand, pretending them to be military targets, as do the amerikans…however they do not dare attack Iran

Throughout history, Jews have never attacked anyone directly, they are evil insidious rats who make others fight and fabricate and tell absolute lies. Look the motto of their Mossad.

A cabinet minister has confirmed that 400,000 gowns from Turkey to protect medics from coronavirus have been impounded because they were poor quality, but he insisted “strong supplies” were now coming through to the frontline.
In a final blow to the government, Brandon Lewis, the Northern Ireland secretary, acknowledged on Thursday that the gowns had in fact been useless for medical purposes.
The items are being held in a facility near Heathrow airport and sources said the DHSC intended to seek a refund, as it has done in similar situations in the past.