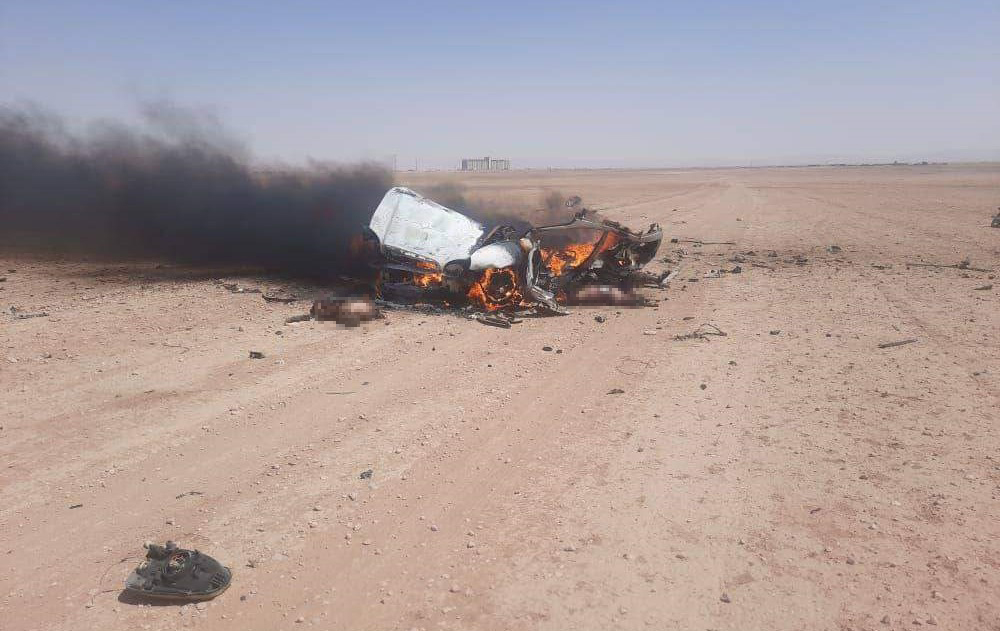 The aftermath of the deadly explosion to the south of Ras al-Ain. Click to see full-size image. Via Twitter.

On May 29, three men were killed when an explosion tore apart their vehicle, a Hyundai Santa Fe SUV, in the area of al-Alia to the south of the Turkish-occupied town of Ras al-Ain in the northern countryside of Syria’s al-Hasakah.

According to the Syrian Observatory for Human Rights, one of the three men killed in the explosion was former commander of ISIS. The London-based monitoring group didn’t identify the person in question.

In the last few years, a series of US-led coalition drone strike targeted commanders and senior members of ISIS in Turkish-occupied areas in northern and northeastern Syria. In fact, one of the coalition’s most recent drone strikes, which took place on October 25, targeted Ras al-Ain.

The strike killed Sabahi Ibrahim al-Muslih, also known as “Abu Hamzah al- Shheell,” a cochairman of ISIS Shura Council. Al-Muslih was reportedly living at the headquarters of the Turkish-backed 20th Division in the town. The UK has claimed responsibility for the strike.

It’s worth noting that the deadly explosion came amid reports of a near operation by the Turkish military and its proxies against the SDF in northern and northeastern Syria.

well it seems that the Turkish are no longer safe

Return payment for the UNHUMAN GENOCIDALS! ALL THEM (plural accusative of ‘IT’) AND ITS CHIHUAHUAS PATS FORWARDS BACK HUT (“home” is for human beings) (= INNER ASIA)!

Blablabla … your (possessive of ‘IT’) jihadihuahuas. Even more contemptible for that. Yes, because you (plural of ‘IT’) are only SHIT, UNHUMAN GENOCIDALS!