The Syrian Government is finally pushing to break a persistent terrorist seize on the predominately Shiite towns of Nubl and Zahraa. 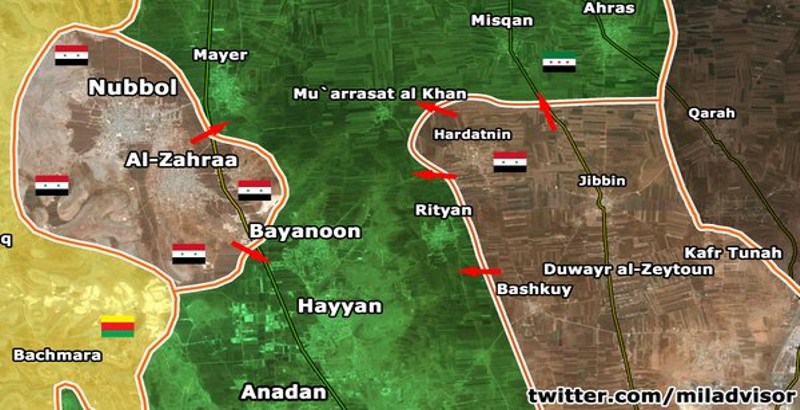 According to a map published by miladvisor in twitter, more Syrian Army attacks reported in north Aleppo. The Syrian Arab Army also attacks on Maraat al-Khan and Rityan. It also attacked terrorists from the pockets of Zahraa abd Nubl.

On January 2, with the help of the Russian Aerospace Forces, the Syrian government troops and Shiite paramilitaries stormed and captured the village of Tall Jibin after launching a surprise offensive in northern Aleppo.

The Syrian Arab Army launched another attack in south to seize several farms in al-Mallah. It was reported that since October of 2015, the Syrian Army has been heavily embattled with ISIS and Jaish al-Fateh in the eastern and southern countryside of Aleppo.

The field report said, the northern Aleppo has remained remarkably quiet over the past year but today’s advance hints at the Syrian Government finally pushing to break a persistent terrorist seize on the predominately Shiite towns of Nubl and Zahraa. Just a few miles split Nubl & Zahraa from the government-held mainland in Aleppo. Locals reported that the area is heavily mined and littered with improvised traps placed by terrorists.

However, the capture of Tall Jibin indicates that government troops are advancing around mined area on the outskirts of Aleppo city as to outflank rebels and push towards the long-term besieged towns of Nubl and Zahraa.

There are also reports that Hezbollah fighters are highly involved in both the besieged Shia towns and the soldiers pushing towards this area. The Syrian Army’s success will allow supplies to reach the inhabitants of Nubl and Zahraa and block Turkish supplies from flowing through Azaz onto terrorist suburbs of Aleppo.

On the other hand, the Syrian Army at al-Mallah is just a few miles from encircling the terrorists inside Aleppo city.