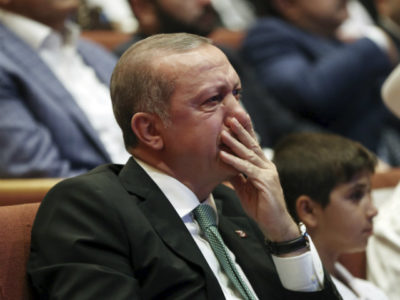 Many experts don’t clearly understand the plans for the resumption of a “new Ottoman geopolitics” by the current government in Ankara because they try to look at the country from a purely dualistic perspective, assuming a “Eurasia vs. West” opposition. But, in fact, Ankara is precisely planning to assert itself as a sovereign power with its own zone of influence, which encompasses regions of the Mediterranean, the Middle East and Central Asia. In this game, US, Russia and even China can be allies or enemies depending on the specific situation. Turkey plays for itself. In this sense, concerning Central Asia, Russia and Turkey are enemies.

In fact, few countries in the world have such conflicting interests as those between Russia and Turkey, especially with regard to their disputes in Central Asia. In recent years, Ankara has been turning its eyes to Central Asia, taking a different and ambitious look towards the East. Indeed, Central Asia is gradually becoming an area of ​​interest for Turkey almost as important as the Mediterranean itself. Among the countries that most interest Turkish plans are Kazakhstan, Uzbekistan, Kyrgyzstan, and Turkmenistan. The aim is to form a major international alliance between countries with a common Turkish ethnic origin, projecting power and influence to consolidate a Turkish “regional space”. For that, however, Erdogan’s bet seems to be the confrontation against Russian or Russian-speaking ethnic groups that inhabit these same countries.

Thus, a conflict of interests emerges with Russia, which wants to continue maintaining influence over the entire post-Soviet space. Both countries have been fighting an increasingly fierce dispute for influence in the region. Reflections of this dispute can be seen in the Nagorno-Karabakh war, for example, but also in “peaceful” situations, such as the constant commercial and cultural tensions. Russia is a great trade partner for every State in that region, while Turkey only achieves a top trade partner status with Turkmenistan.

On the other hand, Ankara invests heavily in soft power and in the cultural industry, building Turkish schools across Central Asia and trying to make the Turkic Council an organization with its own cultural agenda, creating opposition to Russia. Given Russian military supremacy and commercial influence, Turkey has invested in the nationalist cultural industry, forging an “international Turkish identity” to try to undermine the post-Soviet legacy in Central Asia. In this tactic it has also been possible to witness Ankara’s financial and political support for Russianphobic movements in the countries of the region, mainly Kazakhstan, where ultra-nationalist activists have become known recently for demanding the complete abolition of the Russian language.

This was already an extremely deplorable scenario, but now it could become even worse, considering the possibility of a military escalation in tensions. With the dispersal of Afghan citizens to other Central Asian countries, the entire region has become a fertile environment for the emergence of a new route for international terrorism. For months, American think tanks have been suggesting that Washington set up military bases in other Central Asian countries to stop terrorism from advancing after the war in Afghanistan ends. Considering the impact this could have on Russian interests, Turkey – which is also part of NATO – will certainly support the measure and take advantage of the militarization context to create its own bases as well. Whether such a tactic would actually serve to combat terrorism or not, we cannot say at the moment, but it is certainly not the best path to reach international peace, considering the scenario of unnecessary provocations in the Russian strategic environment.

For Ankara, supporting the deployment of US military bases in Central Asia will be a terrible move. If Erdogan really wants to project his country as a sovereign power and “owner” of its own regional space, cooperating with Washington to undermine Russia on purely regional issues is a tactical error. The US never changed its plans to remain a global police force, it just reversed some plans and thought of new tactics. Leaving Afghanistan was profitable because the war was lost, but this is also a pretext for new bases to be deployed in Central America – and, even more strategically, closer to Russia. By supporting this, Turkey will also be undermining its own interests and creating unnecessary military tension with Moscow.

If Turkey tries this they are stupid. The Anglo Saxon plan is to break Turkey up and dissolve it as a nation don’t fall into the trap Turkey . Russia will not allow this rightfully so.

i agree with you but i really don´t have a problem with Turkey breaking up into 6 parts.

The (((anglo-saxon))) plan. Trying to imply that the west globalist powers are anything but jews, jewish puppets, and atheists is simply ridiculous despite being so widespread nowadays.

I don´t know when or how it will start but there will be a war between Russia and Turkey. It’s inevitable

Erdogan always plays both sides of the fight

The Objective
Reply to  Emrisrex

What makes a strong nation? 1. Financial might 2. militarily technology 3. Strong ideology that unites citizens towards a common course particularly the security sector 4. Diplomatic supremacy Tell me which of these Turkey has or the so called eurasia ? Without diplomacy nations can gang up against you, suction and cripple your economy. MUSLIMS ARE SO STUPID THEY LIVE IN DREAMS.

The Objective
Reply to  Robert

If Muslims are so stupid, why were you (the wise crusaders) defeated in Afghanistan? Or if Muslims are so stupid, why are so freaked out about Turkey and Erdogan? Why haven’t you supported democracy like you claim, you two-faced satanic rattlesnakes? Your bitterness is testament to the fact that you realize Islam is the only force that WILL demolish your Western world order and life style. And you are right about that.

Last edited 9 months ago by The Objective
-5
Reply

Neither Russia nor China and Iran ( countries with a great influence in central Asia)..want that Turkey ( a NATO member) stick his nose there….

Turkey is only in NATO by name and to reap as much advantage as possible. But it’ll leave when Erdogan decides there’s no more advantages to be had. Too late to stop it. Turkey is already in central Asia.

The turks have no chance against a Russian, Iranian, Chinese alliance. The SCO, CSTO, BRICS, Eurasian Economic Union, exist to protect and align Eurasian economic, military and geostrategic interests.

There can never be any military alliance between Iran, Russia, and China. Know why? Because they are more likely to compete than cooperate. Take Syria as an example of your so-called Iran-Russia alliance. For instance, Russia lets Israel bomb Iran’s ass in Syria. Russia also clicked a deal for Egyptian oil to replace Iranian oil in Lebanon. What a blow to your future ally. There’s a much better chance of an alliance between Iran and a NATO Turkey than Iran and a non-NATO Russia. At least Turkey wouldn’t allow repeated Israeli strikes on Iranian assets if it could stop it.

Last edited 9 months ago by The Objective
-6
Reply

A pathetic reply worthy of diaper brigade status. Transparent, selective logic. You are a troll imbecile, hasbarat payroll much?

I like it when you react like this. It means I’m hitting you where it hurts. Selective logic? Why not present your logic then. Anyone is free to say anything on this forum. If you still think an alliance between Iran and Russia is possible, please read this: https://www.mei.edu/publications/russias-failed-efforts-restructure-syrian-army

Last edited 9 months ago by The Objective
-6
Reply

Please fool. Would the Eurasian nations advertise their future decades of strategic intentions?

I like it when you post idiotic propaganda garbage. Go back to cnn and promote transgender idiocy. The Russians already exterminated 150000 foreign swine on Syrian territory.

Yeah because Khamenei is Azeri Turk.

Turkey‘s plan is to wipe out or push out Russian speakers from these countries as they slaughtered Armenians, Greeks an other orthodox Christians in the 20th century. A first step was taken in the war against Nagorno Karabach. Russia foolishly did not intervene earlier and Russian weapons prooved to be useless garbage in that conflict. Instead of confronting Turkey, Russia is playing best friends with Erdogan and his brutal clique !