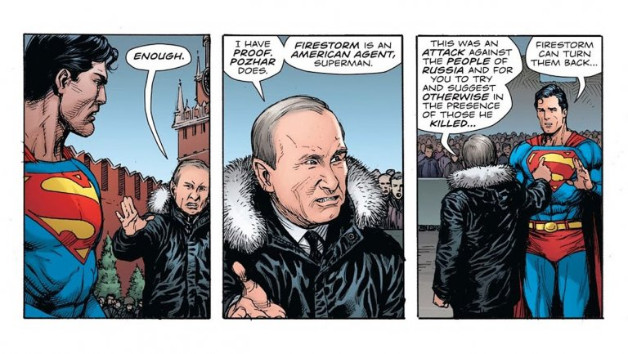 In the same issue, Superman visited the country Black Adam has enslaved and was introduced to an escaped child-slave of DC’s version of Syrian President Bashar al-Assad.

Doomsday Clock is a merge of the universe of DC with the universe of Alan Moore’s Watchmen. The Watchmen universe is a bit darker and has also presented real-life political figures in the past such as Richard Nixon.

However, it has not been such an obvious attempt at propaganda.

In the comic book, Putin has an agenda – to further exploit the “Superman Theory” conspiracy for political gain. The theory posits that the US has been directly behind the abundance of metahumans (e.g., anyone with superpowers) as a way to destabilize rival nations and dominate global affairs.

The emergence of the so-called “Superman Theory” has been seen in previous issues to have destabilized international relations as other nations have attempted to build their own superhuman armies, leading to this issue’s appearance of Putin.

This is further reinforced by the appearance of an American superhero, Firestorm who, using his powers, turns a crown of Russian citizens into glass.

“They have been amassing an army covertly for more than a decade. Forcing us to amass our own. Firestorm will be found wherever he is. Along with everyone connected to his creation. Including members of the United States Government. We are at war…” Putin explains at a press conference after the incident, of course playing the victim. Where he says anyone connected to Firestorm will be held accountable. This includes the U.S. government, where he then openly declares they’re now at war.

Putin is in front of the Kremlin, surrounded by tanks and soldiers and declares that Firestorm is an agent of the US government and that he “NO LONGER tolerate America’s lies!”

Superman then appears, respected in everywhere in the world and attempts to explain that the incident was just a big misunderstanding and that Firestorm can use his powers to revert the Russian individuals back to normal.

Firestorm then appears carrying a Russian child that he had brought back to life, however, unconvinced Putin orders the Russian soldiers to open fire and the tanks advance on top of the Russian citizens that were turned to glass. Superman, as expected, intervenes saves the child, while Putin makes his escape.

It would not be surprising if he escapes to his private island in Finland and if the villain in the next James Bond movie has a striking resemblance to him.

It is also interesting what the remaining 3 issues of Doomsday clock will contain, since they presented Assad, who is a “Russian puppet” who would even enslave children and even gas them, then it presented the actual “evil mastermind” Vladimir Putin, who would not hesitate to charge tanks right through the citizens who could be saved.

RT also reminded of a 1988 Batman issue, shared on Twitter by a user named Emilio:

Wow, Iran's Ayatollah Khomeini deals with The Joker in a 1988 Batman comic. Show's you where America's head was at… pic.twitter.com/aJHHuMolUm

Following that, the Joker appears dressed in an Arab keffiyeh (which Iranians don’t wear) and tells the UN General Assembly that he and the Iranian leaders “have much in common, like insanity and a great love of fish” and, as expected, gasses the audience.

Stay tuned for a review of issues 9, 10, 11 and 12 of the Doomsday clock so that readers can see if any Iranian officials or North Korean officials make a ‘surprise’ appearance.

Americans are a sick sick nation…

they always have been that.

No nation has the moral high ground. Especially America.

They are not a real nation. They are bunch of random people, immigrants from all over the world. What common culture they have? Cartoons and Hollywood.

The motto of the US .

‘ By cartoons and stupidity we fight war.’

thanks for the laugh, I needed a good one.

There are far less casualties in the Meme wars. They should be encouraged. ;-)

Maybe you could create your own media outlet, and decide what’s newsworthy.

Exposing american propaganda and brain washing of the young population of the moronic states, it is not only news but also is demanded. Use your brain post after, no insult mean here, just a friendly advice.

The Hollywood movie “Schindlers´s list” shows the true story about WWII that 54 million died because they tried to save the 6 million.

did they really. Try getting off the cool aid you been on all your life maybe you get somewhat on line with reality.

What 6 million? WE have all been fed a LIE, by the people who needed emotional guilt leverage over the rest of us, so that we would all meekly acquiesce when they stole Palestine and took over Amerika . .

Comics, the perfect way to communicate with Americans, words are just too difficult for Americans to understand, simple pictures matches with the IQ of the average American. To understand America, watch the movie Idiocracy.

I suggest for DC to hold a master class on propaganda this is a masterpiece!

America, a country full of lunatics and psychopaths !!! They should all know: In order to experience the “American dream”, you have to stay asleep. And in the real world most of our hero’s are death, …

They are programming young americans to be retarded people once they reach adulthood.

Did Putin really say “ENOUGH” to Superman?? But Putin cant handle Dr, Manhatten, he is too strong for Russia and on our side.

Comic books and coloring books — that is the literacy level of those brainwashed by Neocon propaganda.

And where is Superman by now???