Serial numbers of the missile

The Russian military traced the Buk missile [9M38 missile], which shot down the Malaysian Airlines flight MH17 in eastern Ukraine in 2014, using serial numbers found on missile fragments showcased by an international team of investigators led by the Netherlands. 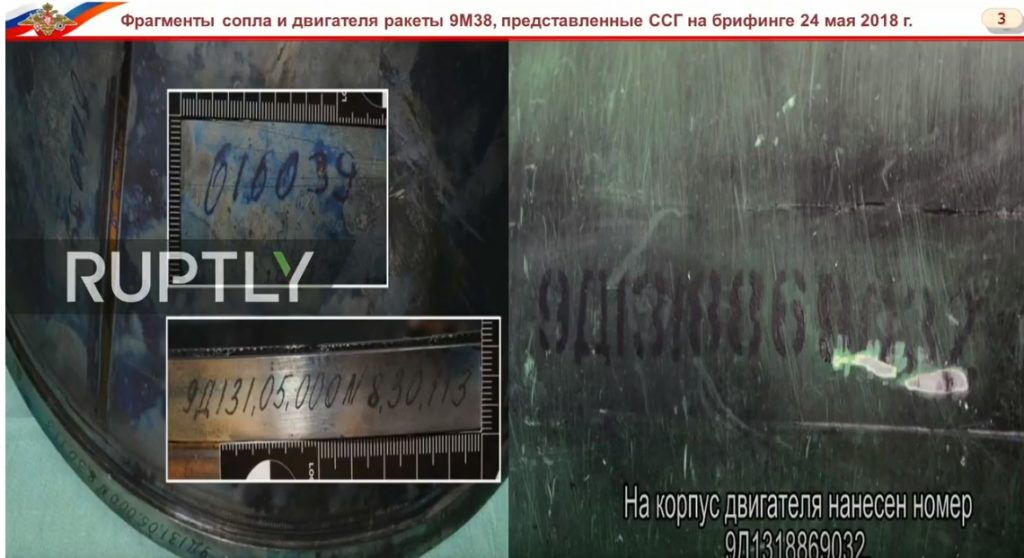 Using the serial number of the nozzle cluster 9D13105000 No. 8-30-113 and the engine of the missile 9D131 with the serial number 8869032, the Russian military identified this missile as one produced by the Dolgoprudny plant – a Soviet/Russian designer and mass producer of surface-to-air missiles located in the city of Dolgoprudny, Moscow Oblast. 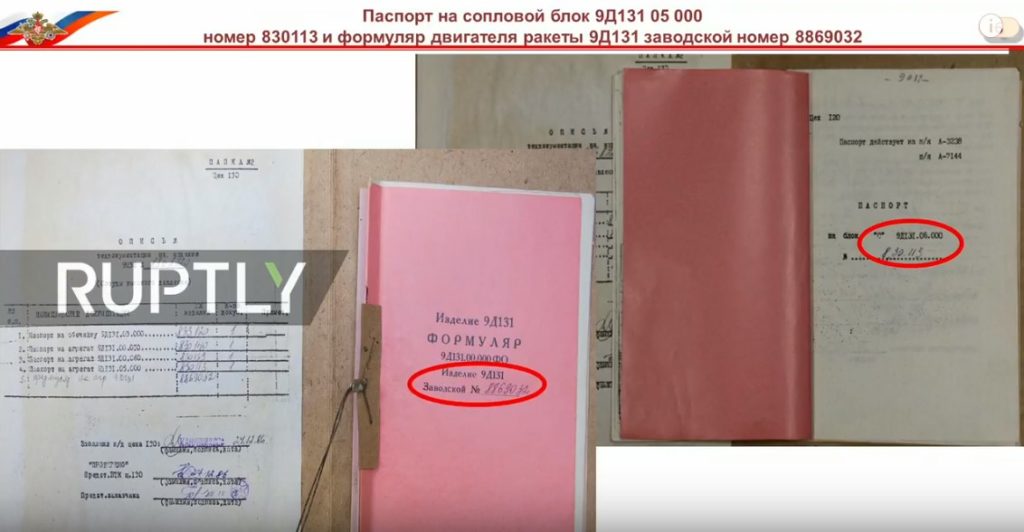 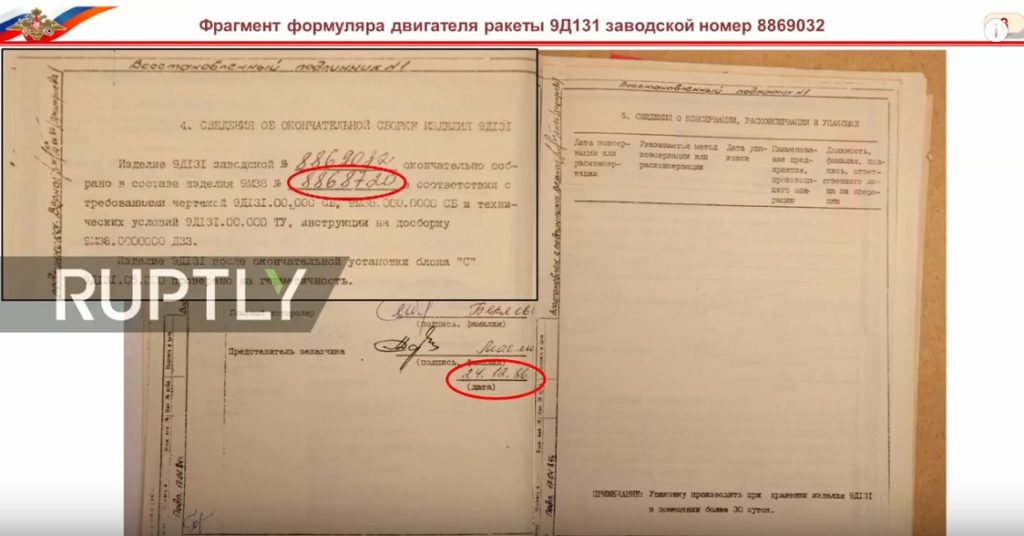 A part of the documents showing confirming the installation of the engine and the nozzle cluster to the Buk missile [9M38] with the serial number of 8868720: 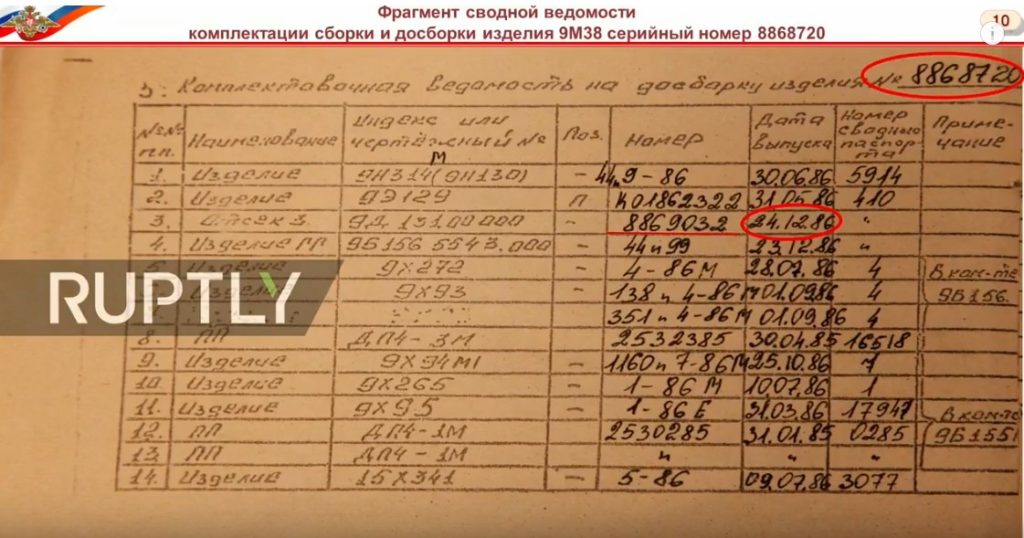 The manufacturing serial number allowed the Russian Defense Ministry to get the serial number of the assembled missile: 886847379. On December 29, 1986, this missile was sent by rail to the military unit 20152 of the USSR Armed Forces. 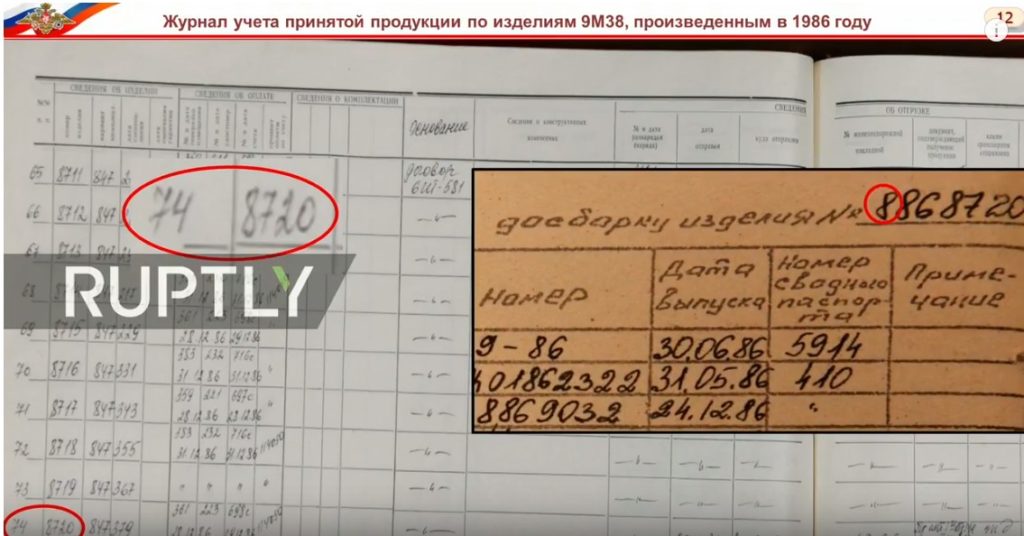 Now, 223 anti-aircraft missile regiment is located in the city of Stryi of the Lviv region. The regiment has Buk missile systems and has particiapted in the conflict in eastern Ukraine.

The Russian side provided this information to the international team of investigators led by the Netherlands.

The Russian side also studied video footage used by the UK-based group Bellingcat and then international investigators to allege that the Buk launcher involved in the incident was transported from Russia and was belonging to the 53rd Anti-Aircraft Missile Brigade of the Russian Armed Forces. During the press briefing, the ministry of defense said that the footage had been manipulated (start 12:46-18:19):

According to the provided study, the video includes multiple inconsistencies and cannot be used as a proof of anything. Major General Konashenkov pointed out that this video is an attempt to manipulate the international investigation.

The Russian side also provided what it called a record of intercepted communications of Ukrainian military servicemen discussing, in 2016, the risk of flying through restricted airspace over Ukraine. The provided audio includes a convesation of two persons who complian about a chaos within Ukrainian airspace. One of the persons says that they will get “another Malaysian Boeing” if the situation does not improve (19:18-21:04).

The conversation was recorded in 2016 in the Odessa Region of Ukraine.

One of the persons on the record was identified as Col. Ruslan Grinchak, who serves in a brigade responsible for radar control of the Ukrainian airspace. The Russian Defense Ministry pointed out that his unit tracked the MH17 flight in 2014, so he may have information which is not publicly available. 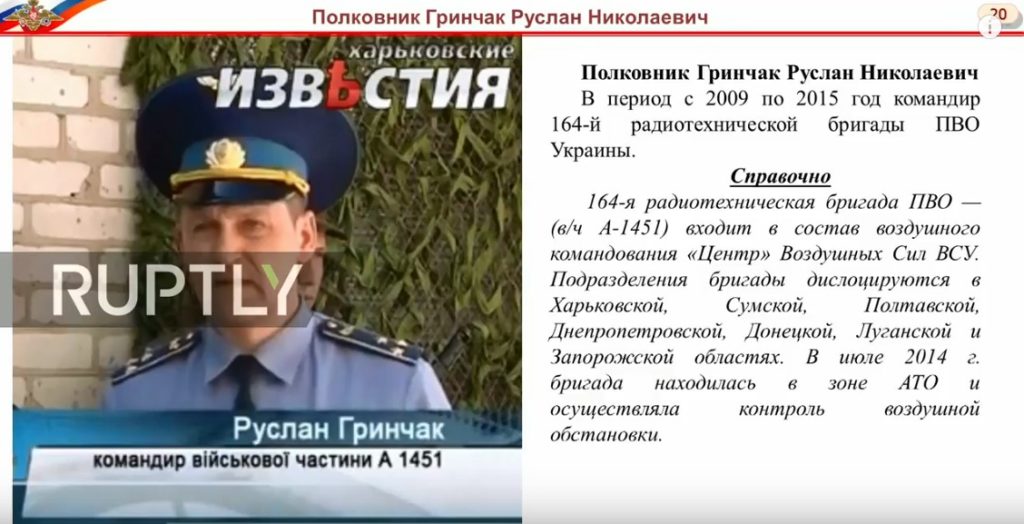 The so called “West” is once again caught up in its own tissue of lies and misplaced recriminations; like the Skripal affair in the UK, the incident demonstrates the utter corruption and extreme dishonesty of the entire NATO and EU, US Governments and their appalling MSM which are worse than USSR’s PRAVDA and the Nazi VOLKISCHE BEOBACHTER. No one can believe a word the West is saying as they have lied consisitently for 60 years or more.

they are really funny, how idiotic they are :-D … but in these lies die children in Syria, Afghanistan, Iraq, Libya, Mexico, Colombia, Ukraine, Europe (by migrant criminals made by EU nazi “elites”) etc. copies of the uSS “interventions”

Jan, these evil swine and their lousy corrupt agenda have killed more than 60 million people and have maimed and destroyed the lives of hundreds of millions more for the last 75 years since WW2. Before that they were Colonialists raping and pillaging other peoples countries for Centuries!! Democracies??? …….what an appalling joke!!! They’re greedy, power mad capitalists of the very worst kind, hiding behind their controlled Mainstream Media pumping out lies and disinformation to brainwash and confuse the electorates. The entire system is so corrupt and “rotten to the core” it stinks to high heaven. God please deliver us from such consummate evil!

I don’t think the truth really matters to most in the west, the people just accept the American lies.

Because they can only be with them or against them, the spineless miserable brainless semi-humans

That’s true for most americans, but hopefully not for the family members of the victim of MH17 flight

It’s all been studied and perfected. You show up at work and contradict the MSM message and the indoctrinated mass treat you like a real terrorist. Eventually all the workers comply and you have nirvana. All the Hollywood programming reinforces the messages you need to know to fit in.

Step outa line, the man comes and takes you away. What song was that?

All the findings will be dismissed as propaganda, and rightfully so, as they come after so many years. The Russians seem to have learned nothing in the last 3 decades. Whom do they try to impress anyways? Those that don’t believe the official story or those that do? So the new “revelations” will not change anything. It would be much more profitable for the Russian government to start learning how to defeat enemies by using their own methods and trickery. Nothing short of that will work, not the truth, not the evidence.

as
Reply to  nesa

They cannot simply do so with well documented evidence like this serial number presented without strong base to debunk them. They have aimed to create a realm divide with their own version completely disconnected with reality presented by the alternative media. So far they have failed. They hope that nationalism would force their population to take their sides of presentation perhaps without good perception that their population dissent have pushed them away exactly from their media largely unchanged after war on terror.

westerners aren’t even able to keep illegal migrants taking over their countries, do you believe they are going to take on Russia?

Exactly their theory supposed to be. Bad Russia would unite their population behind their government and believing their state operated media as if they have no other choice. Where it wrong is little fault can be attributed to Russia while the same can’t be said about their own government. I mean the perpetrators that pushed UK into phony war in Iraq despite their citizens overwhelmingly against them still roams free, perhaps writing some books about it as well.

You seem to be missing the point. Not that ling ago, Dutch led Joint ivestigation team revealed their “evidence” – parts of missile and bellingcat video. This “evidence” was destroyed today. Many say that we live in “post truth” period… call be oldfashioned if you want but there are many (me included) that still believe in importance of truth.

Arguably the Post Truth Period has always been active to a lesser or greater extent. It is only today that we are able to glean facts from around the globe in seconds and compare that with any bullshit that we in our homes home are being told by those who seek to control us and even to encourage us to fight wars for them whilst they ‘cheer us on’ from far behind :)

all those believing that post-truth can defeat the truth are in for a bad ride.

it’s so blatantly crystal clear that even kids can understand why.

i don’t see how a mind that has not been irreversibly crippled can honestly think that fabrications will lead to any good.

and who will give a damn, until Russia shoves the evidence in their faces? It’s quite alright for them (Banderastan and united snakes and Holland etc.) to falsely demonise a country for killing 298 people (inc. 80 children) and Russia will do nothing. (except make evidence available) which the whole world will ignore in their ‘rigged by Soros game’

Elliot Higgins should be formally charged by Russia with war crimes (spreading deliberately created and false propaganda) and tried at The Hague. And Banderastan should also be jointly charged with fabricating the lot, which led to the murders of nearly 300 innocents.. But of course, Russia never wants to rock the boat, because it would depress its energy sales.

I noticed the BBC has been really slow on reporting on today’s briefing (unlike some other British newspapers that did pick up on it). It has now been several hours and the news is all over the internet (Ukraine has even had time to dismiss it all as lies). This long delay on the part of the BBC is quite telling – they clearly don’t know yet exactly what to do. What I am really looking forward to, however, is on how the JIT will handle this. It will be difficult for them to just ignore this info, as it is much more than just a blank accusation or rough hypothesis. At the very least, they will have to follow up on the invitation to visit Moscow and peruse the documents themselves, especially since they specifically asked for information related to the serial numbers in their 25 May briefing.

as
Reply to  Aphelion

Thanks For the UK side heads up. Then it seems they’re at a loss of what next step they should take this hard debunking.

I ‘m on record as saying i Do not think Russia did it and if they did,it was an accident. Yet the trolls will say Eastern ukrainian rebels stole the missile launcher after they overan a ukrainian post or that all docs provided by Russians are faked. Where do you find an” honest broker”?

It was the Swiss fed labs in the past but since the Americans screwed Switzerland over the secret bank accounts the Swiss are now America’s bitch!

Similar when western investigation ruled that DC9 crashed in Ustica ( Italy) was a consecuence of a bomb in the toilets….but 14 years after an Italy high court ruled that it was as consecuence of an air to air missile fired by NATO fighter jet which was chasing a Libyan Mig 23….

the recovery of the airplane wreck was conduced by a french ship, on which by contract, access by italian authorities was completely banned.

to make it short: they recovered the wreck, then detonated a bomb in the toilet to fabricate evidence that it wasn’t a missile.

italian submarines recorded the event, and the audio files are still kept somewhere in some naval intelligence facility.

It is time RF BEHAVED according to the evidence instead of hoping, like a forlorn lover, for some sort of hearing from the kangaroo courts of the US/EU/NATO gangsters. The Fatso should be declared a war criminal and booked for trial in RF. The diplomatic contact with the US/EU/NATO gangsters should be reduced to the level of countries such as Vanawatu. RF leaders should stop meeting with these gangster leaders and conduct relationship be secure email, instead of hankering after meetings. Until these behavioural messages are given, the evidence produces by RF is totally worthless and a waste of time and effort. Would RF bother to present evidence to a religious Christian Taleban court in the US that seeks to “prove” that the world was created in 7007 BC, or a flat Earth Society? Apologies to all intelligent kangaroos of Aus!

The BBC reported this story about 1 hour ago with this comment: “Prosecutors say Russian information so far has been wrong “on several points” and previous requests for help have been unanswered.” https://www.bbc.co.uk/news/world-europe-45546611

Typical of the slime balls in the BBC.

Just about all the information a Dutch investigation committee in denial could need. If they ignore this evidence the remainder of their teetering integrity is toast.

They may as well blame an evil Santa because no one will be taking any notice of a Dutch investigation committee in denial. All those who died are being sold down the river so that corrupt politicians can make a killing.