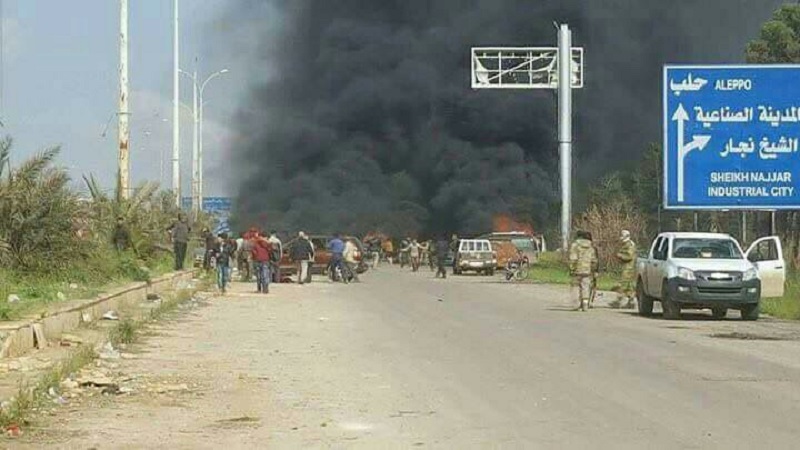 A suicide bomber targeted a convoy of women and children evacuated from the villages of Fou’a and Kafriya in the northern Idlib countryside when they arrived at one of the entrances to the city of Aleppo on Satuday.

So far reports indicate that over 70 civilians, mostly women and children, were killed as a result of the attack. Pro-opposition sources also said that two guards of the convoy from Hay’at Tahrir al-Sham (HTS) were killed in the bombing.

The count of dead is expected to rise considerably, unfortunately, as most of the injuried people are in critical stance. The ‘moderate’ opposition and HTS refused to transfer the injured civilians to the government-held area. In turn, they were transferred to hospitals in HTS-controled areas in the province of Idlib.

From its side, the Syrian government stopped the buses of civilians from Zabadani and Madaya, and prevented them from leaving until the circumstances of the Aleppo attack become clear. Also the government did not allow any buses to enter from Al Rashedeen to the goverment-held areas of Aleppo city.

According to several pro-government and pro-opposition sources: the ISIS-linked group Jund al-Aqsa is behind the attack.

It is worth mentioning that HTS (formerly Jabhat al-Nusra, the Syrian branch of al-Qaeda) has worked several times to protect Jund Al-Aqsa forces from attacks of the Free Syrian Army and Ahrar al-Sham. Even despite some fighters from Jund al-Aqsa have recently joined HTS, they allegedly keep contact with ISIS. This situation raises many questions.

UPD [17:19 CET]: 4 new buses have entered Al-Rashdeen to replace the destroyed by the attack. The implementation of the agreement will be continued tonight.

Western OUTRAGE at this atrocity appearing in three…, two….., one……, uh, not at all.

These fu*ker animal deserve more painful death to them, giving nerve gas to them was more mercy, who the f*ck done this need to be killed slowly by pouring piece a sharp razor to his mouth and swallow it

was thinking exactly this

In the words of the infamous colonel Killgore:”Goddamn savages!!!”

ISIS degenerates want to sabotage this exchange of evacuated people…

They’re the errand boys, it’s the barbarians in Washington that give the orders. Bastards

Another American that believes the US does no wrong.

why isn’t nobody telling that the “syrian revolution” is about ethnic cleansing of all those that are not sunnis?

why, since the Sunnis were killing each other, too?

They have to be the right kind of sunnis. Those targeted are not sunnis at all, they are shia, which was the reason the jihadists were besieging them.

This is an outrage indeed. Targeting just women and children being evacuated under a truce. Abominable.

In my mind, it raises the question, was Jund al Aqsa not dissolved and or merged?

Yeah, its Trumps and Co “freedom looooving” happy head chopping moderates, just ask the uISISa whom have become their air force, yeah, thanks Trump, you must be proud and where is Ivanka, that creepy little shithead crying something about children, huh, scums. In Norway they have and is ramping up the slow process of white washing ISIS/Al-quead for those brain-dead that still thinks this is an “rebel” force, and even articles where they interviewer Al-quedas, in Yemen, the same people Saudis are arming and slaughtering Yemeni’s, but like Syria, Norwegian MSM lies all the time. They, the western MSM dont bother to hide it anymore, the same narrative we have been labeled conspiracy nuts for years is now in the open, even in Norway and of course they closed the comments to this article. But then again, Norway is run by Neo-con and Israel bitches like the despicable rotten Trump is.

I didnt bother to read much, other than the wests hypocrisy and flat out lies about ISIS; witch we all know is bed buddy to the CIA/Trumpistans creeps, and Norway, whom whined about Chines, you know, the human right bullshit about an Sore-ass/CIA NGO, whom the Gov. stopped, but the Norse never debates why we have Norwegians inside Syria and Jordan, to train what, “rebels”. ISIS light, or just ask Trump, if He even knows where Syria is when He dives into cakes. The Norse whom burned children alive with phsophore and cluster bombs in Libya and to the present Syrian theater, and now we are to “help” the Saudi backed dick, with ever more bombings, like the uISISa army’s are doing to day, bombing the only force fighting the ISIS, the Houti alians. But hey, they are killing “rebels”, Trumps boys, aka ISIS.

And this gets even worse when we talk about NK, I haven not seen this level of lies and bullshit since the invasion on Libya/Syria/Yemen and so on. I have an bad feeling, so bad its like I an jumpy just opening the news sites this days, what comes next, what new war game is the uISISa opening to day.