“It was determined that 41 people lost their lives. Thirty seven people of those killed have been identified, 10 of them foreign nationals, while 3 were found to be dual citizens,” the Istanbul governor office’s press release says.

UPDATE: According to recent updates, some 36 people were killed and over 140 injured in suicide bombings and gunfire at Istanbul’s Ataturk Airport last night. Foreigners could be among the dead. Five of those killed by terror attacks were officers.

CCTV video from the scene (Footage shows security guard shoot terrorist gunman, who then loses his AK and detonates SVIED):

Turkish Prime Minister Binali Yildirim has said to the media that initial findings point to the ISIS terrorist group responsibility for the attacks. 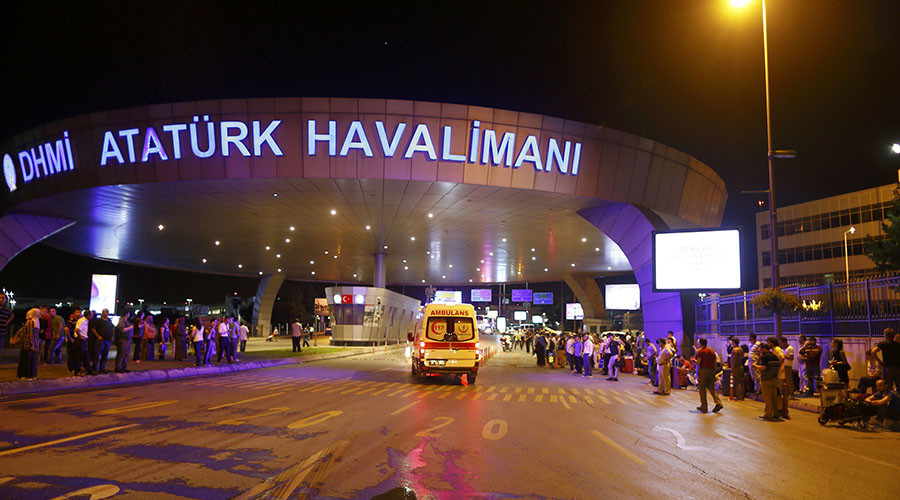 The Turkish Justice Minister has confirmed 10 people dead and different sources report about up to 60 injured in two suicide bombings and gunfire at Istanbul’s Ataturk Airport.

The attackers detonated exposive devises at the x-ray security checkpoint after being fired on by police. The Justice Minister says that at least one of the attackers opened fire with a Kalashnikov rifle.

Separately, local media added that 2 individuals threw hand grenades into the airport – this has not been confirmed yet.

Alleged picture of an AK-47 on the floor of the terminal (unverified) #Turkey #Istanbul pic.twitter.com/Tk1fB5f8FR

Initially it has been reported that the explosions occurred in the airport’s International Arrivals Terminal. According to other reports, the blasts targeted 2 separate locations of the airport. According to CNN Turk, Gunfire has been heard from the car park near the airport. Turkey’s NTV channel says four armed men were seen running away from the terminal building after the attacks. Turkish MP Eren Erdem says the blasts were suicide bomb attacks.

The Turkish authorities have called for the creation of a crisis center.

Heavily armed security have been seen outside the airport after the attack:

Turkey should review their support to allies that arm militants in middle east. You never know who will use it against you.

Looks like Gladio B to me . Lets analyse the facts and events surrounding them Netanyahooo visits the Kremlin last week, Two days later the Rome conference with Netanyaoooo and the Sultan of fascism Erdogan.. Plus prior to Netanyahoo.s visit to the Kremlin Erdogan the sultan of fascism puts out feelers with his foreign ministries out to Assad and the Kremlin for renogotiating some sort of diplomatic ties/detente. The SAA meanwhile r advancing on Raqqa and are close to encircling Aleppo. Smell a rat me thinks. Just a little food for thought for u fellow bloggers.

We all know who is pulling these strings. Always playing both sides of every war, always.

Do we have a little obsession with the Jews?

These poor people will never know who actually armed the hand of the terrorists….

The most simple explanation to me is that this is the price Erdogan pays for using Islamist groups to topple Assad. By supporting Al Nusra and Army of Islam he is allowing Sunni Islamic cells to thrive in his country that also assist ISIS. If someone is a Silafist (I like the Iranian term Takfiri), it’s not like they have a stamp that says, ‘I will only fight for Al Nusra’. The membership between all of those groups is fluid.

So Erdogan is to blame for allowing porous borders between Syria and Turkey, between Turkey and the rest of the world to let foreign Jihadists in, and for allowing Sunni radical cells thrive in his country. BTW I am being generous and not even accusing him of directly supporting ISIS, it isn’t even necessary. His support for these other groups helps ISIS.

I do find it interesting that ISIS primarily targets foreigners in Turkey and only kills Turks, seemingly as collateral damage and a CIA analyst pointed out that ISIS does not like to claim responsibility for attacks in Turkey.