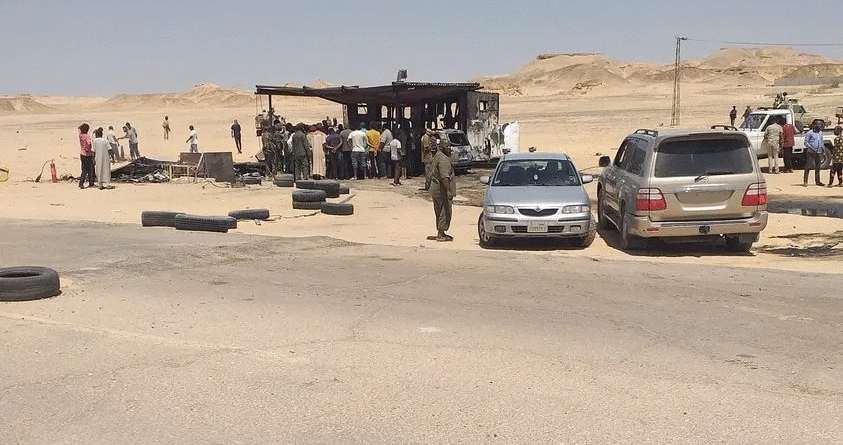 On August 22nd, an ISIS suicide bomber attacked a checkpoint into the Libyan town of Zella.

In the process he killed himself, and nobody else, according to Field Marshal Khalifa Haftar’s Libyan National Army (LNA).

“An IS suicide bomber attacked the Zalla checkpoint with a car bomb, causing no human casualties,” the spokesman of the eastern-based army, Ahmad al-Mismari, posted on his official Facebook page.

“The terrorist was confronted and seriously wounded, after which he died in the hospital,” he added.

Al-Mismari posted photos showing the bomber bleeding from his wounds.

Ever since the fall of the late leader Muammar Gaddafi’s regime in 2011, Libya has been suffering insecurity and chaos.

Despite the appointment of a new executive authority of a unity government and a presidency council in February after years of political division, Libya’s security situation remains weak, as security breaches and kidnappings still occur in different parts of the country.

Still, Field Marshal Haftar’s forces made sure that large swathes of the country were freed from terrorist presence and attacks are uncommon.

Meanwhile, Haftar vowed that the LNA would never bow to a “civilian power not elected by the people”.

On 9 August, Haftar delivered a strong speech to soldiers from the Benina military base, in the eastern part of the country. “The Libyan army will never bow down to a civilian power that has not been elected by the people,” he said from the lectern.

Speaking at a parade for his forces in Benghazi to commemorate the 81st anniversary of establishing the Libyan Army, Haftar said his forces will continue to fight “waves of terrorists who came to Libya with murder and decapitation,” saying his forces are “the cornerstone for people’s demands of the Libyan Army when their lives are in danger.

Haftar said he is with any party that wants to achieve justice and peace, saying he won’t recognize “humility agreements”, and that his forces paved the way for what is going on in Libya, as without his forces, “there won’t be a unity government and elections”.

This was a reaction to the announcement that the presidential council had made the day before: that it was the only body authorized to order military operations.

The general’s statement made a mockery of the interim government of national unity (GUN), whose president Mohamed el-Menfi is – in principle – the army’s supreme commander.