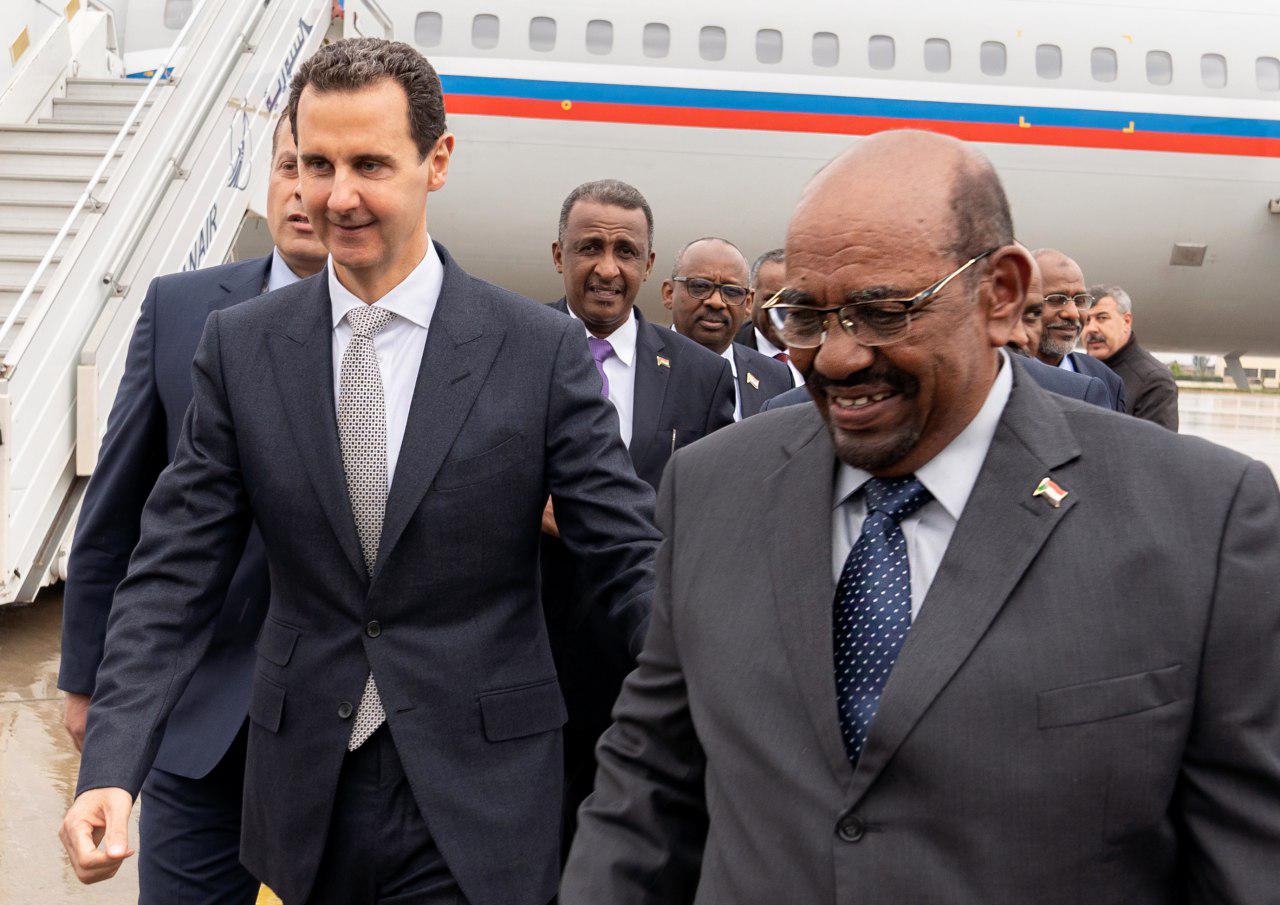 The Syrian Arab News Agency (SAA) said that Assad welcomed al-Bashir in Damascus airport then both presidents headed to the People’s Palace, where they held a meeting on bilateral relations and developments in Syria and the region.

“President al-Assad and President al-Bashir affirmed that the circumstances and crises affecting several Arab countries require finding new approaches for Arab action that are based on respecting the sovereignty of states and non-interference in their internal affairs, which should improve inter-Arab relations and serve the interests of the Arab people,” the SANA said in a press release.

During the meeting, al-Bashir said that weakening Syria means weakening Arab causes. The Sudanese President added that “despite the war, Syria continues to adhere to the standards of the Arab nations.”

“He [al-Bashir] voiced hope that Syria will recover its vitality and role in the region as soon as possible, and that its people will be able to decide the country’s future themselves without any foreign interference,” SANA said.

From his side, Assad affirmed that Syria still believes in Arabism and warned from the dependence of some Arab countries on the West that “will not bring any benefits to their peoples,” according to him.

Al-Bashir, who reportedly arrived aboard a Russian plane, has built a network of complicated relations across the Middle East over the last ten years. While he actively supports the Saudi-led coalition in Yemen, the Sudanese President maintained excellent relations with Turkey and Qatar.

Local observers said that al-Bashir’s visit to Damascus will pave the way for other Arab leaders. Since the beginning of this year, Syria’s relations with Jordan, Bahrain, UAE and Egypt witnessed much improvement.

Great….Empereur Emmanuelle Macroni du Rothschild XVI came out the Closet, Witch of IsraHell Theresa May is Brexit, Erdogan announces in Public that he will cooperate with Assad, Syrian Airspace is tightly Sealed, Mister Trumpster is Neutralized just as his Buddy Mohammed Ben Shlomo, Awareness is growin’…meanwhile the Scum gets Angrier…..It seems 2019 is going to be a Great Year for Beachhead IsraHell……

I’ve heard of Syria but not Stria?

Sudan has also been a victim of Americun* terrorism and would surely sympathize with Syria.

Sudan is not very trustworthy as it changes with the wind. Bashir sent 15,000 Sudanese mercenaries to Yemen. Most were killed or wounded. The Saudi racist cowards paid the black Sudanese the least amount of money, mere $100 a month, while the other Wahhabi headchopprers are paid $350 a month by Saudi, Emirati, Kuwaiti and CIA money.

Also Bashir was an Iran ally until Saudi Arabia bought him out in 2015.

Arabs are famous to bend with the wind, everyone knows that Dr. Assad has won and Syria has strong backers in Iran and Russia who are not about to let the US scumbag’s Wahhabi headchoppers overthrow any Axis of Resistance popular government. Sudan is also pulling out its mercenaries from Yemen after suffering over 3,000 dead and 5,000 wounded. The Sudanese base near Aden was hit by Ansarollah missiles and almost all the officer corps wiped out. No wonder the Sudanese refused to fight near Hodeidah.

The Sudanese people are victimized by Saudis. They would rather deal with Egyptians who are traditional friends of Syria and Lebanon. Together with Yemen and Egypt they would control the red Sea.

Omar al Bashir is allegedly wanted by the ICC for defending his country from outside schemes. It’s worth noting that he flew to this meeting in a Russian flagged plane. It was probably the only way he could be certain of safe travels in this world of political arrests like Madame Huawei. Russia may soon be rewarded with several hundred million dollars worth of defense equipment contracts by the Sudanese government. There is commerce and good relationships to be had by treating other countries as equals who are entitled to their own internal affairs.

You can call me Al
Reply to  Ricky Miller

But the Yankers have bases and troops in The Sudan ……. to me, somethings up.

Russian flagged plane or just a russian made plane? The difference is huge, and the article just says “Russian plane”

SF articles have used misleading titles before, so before i get proof of the Russian flag actually being on the plane Mr. Assad arrived in, i would ignore that sentence.

The four other articles i have read on the subject does not mention a thing about the “nationality” of the plane Mr. Assad arrived in.

Al-Bashir oversaw the genocide of half a million people in Darfur with his Wahhabized Janjaweed Militia. The ICC has charged him with war crimes, crimes against humanity and genocide. Assad should have strung him up and had him executed the second he got off the plane. Better yet, chain him to a post in the middle of the al Fur homeland of western Sudan and let them decide how slowly and painfully he dies.

Pave, the ICC it’s a crime against humanity.

Well said, palling around with this guy is a bad mistake – Sudan has less than zero influence, pressure or cred anywhere, and I read ” … actively supports the Saudi led coalition in Yemen and maintains excellent relations with Turkey and Qatar …” all three arch enemies of Syria – Saudis and Qatar continue to fund, army, supply and feed in jihadi terrorist gangs, Turkey invades and occupies northern Syria – what on earth possessed Syria to lay out a welcome to this mercenary despot FFS ??

Nice one; I am surprised the Assad agreed to meet him. Since The Sudan are US puppets, I am very surprised at this.

PS Look at the first picture and ask yourself, which other foocked up Countries need to wear badges showing their Countries flag ?. Its all in the detail.

May Allah protect Bashir and may Allah bring destruction to the murderous Saudi and its allies that kill million of fellow Muslim in Afghanistan, Iraq, Libya, Syria, Yemen and Palestinian.

Convey this message to allah Saudi monarch and Allah Erdogan.Saudis arrested all its billionares to please Trump,Macoroni,May And Merkel.Erdogan destroyed his own army to seek good books and repair ties with Putin not Russia.

Sudan is all over the place and is for hire to the highest bidder. It has also given the port of Saukin on the red sea coast.

Ankara was given full-rights to rehabilitate the port island/town of Suakin in northeastern Sudan, with a naval dock for both civilian and military vessels on the west coast of the Red Sea. In addition to rebuilding the now abandoned inland ghost town of Suakin, the Turkish government will also resurrect the former Ottoman port as a historic transit point for pilgrims crossing the Red Sea to Makkah, given its proximity to the Saudi port city of Jeddah.

The controversial agreement was reached by President Recep Tayyip Erdogan with his Sudanese counterpart Omar Al Bashir during a summit in Khartoum earlier this year.. Turkish state media said this would be part of a broader agreement between the two countries, worth $650 million — money that Turkey presently does not have. The real source of the funds is probably Qatar. In addition to a military base, Ankara plans to build a new airport in Khartoum, and to invest in cotton production, electricity generation, and grain silos.

The Arab league has been working feverishly behind the scenes to make this happen, so many friendly meetings, so many productive rounds of discussions, SO MUCH GOOD NEWS, it’s hard to take in, the last 6 months or more these guys have turned the tables on the US and Israel. Soon nearly all the other Arab league nations will follow suit [weeks, months], but at least one of them won’t, can anyone guess who, it’s Israel’s biggest fan in the ME, the Saudis. But it’s not just that the Saudis don’t want anything to do with the negotiations that are leading to what’s about to happen [I THINK], it’s because nearly all the other Arab league nation’s don’t want them involved at all. The Saudis are on the nose too, it’s not just Erdogan desperate to make friends now. If anyone’s curious as to why there’s has been a change in Syria’s fortunes recently, going all the way back to the Darra/Quneitra campaign, check out what the Arab League of Nations has been up to since just before that time.