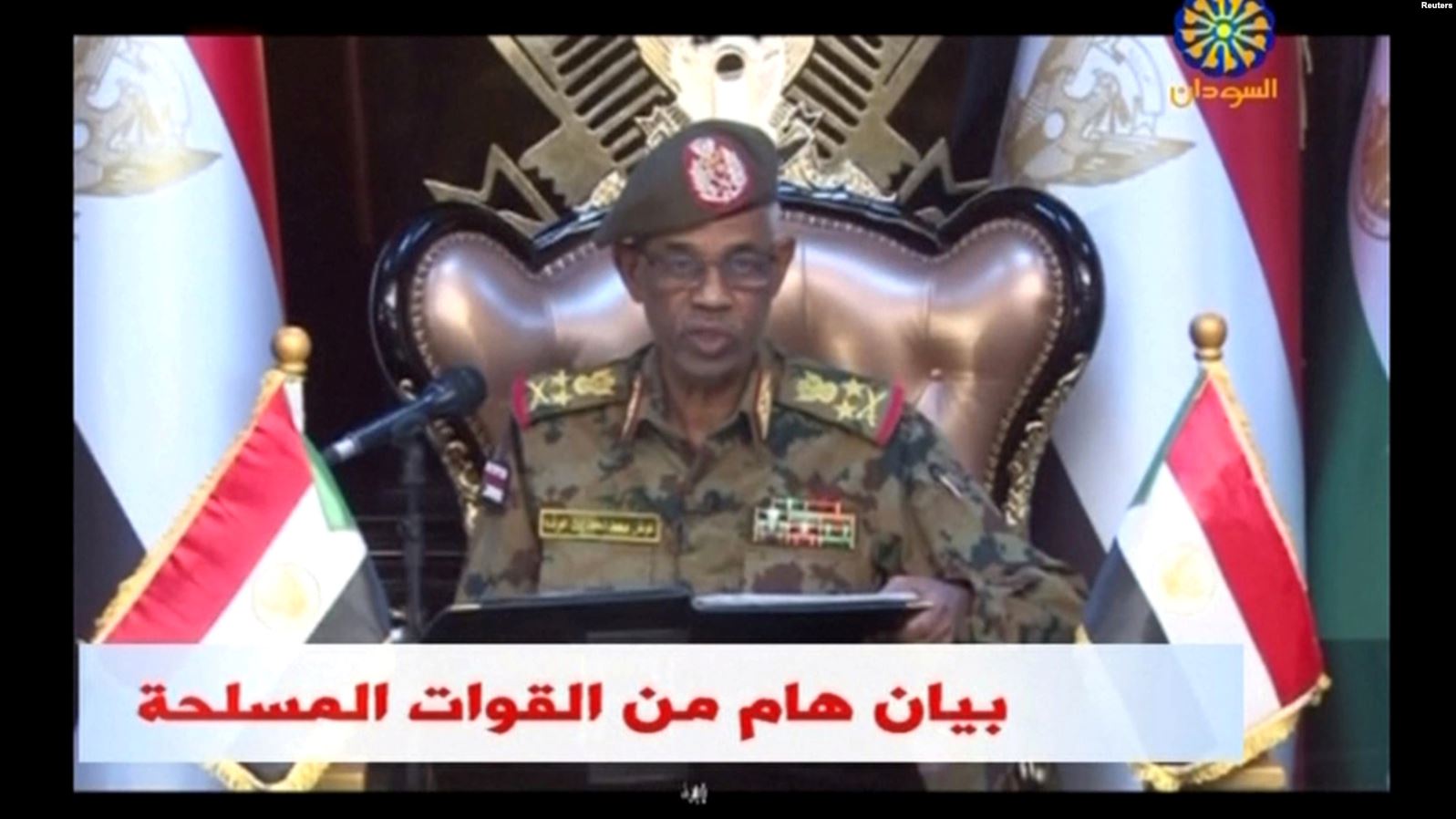 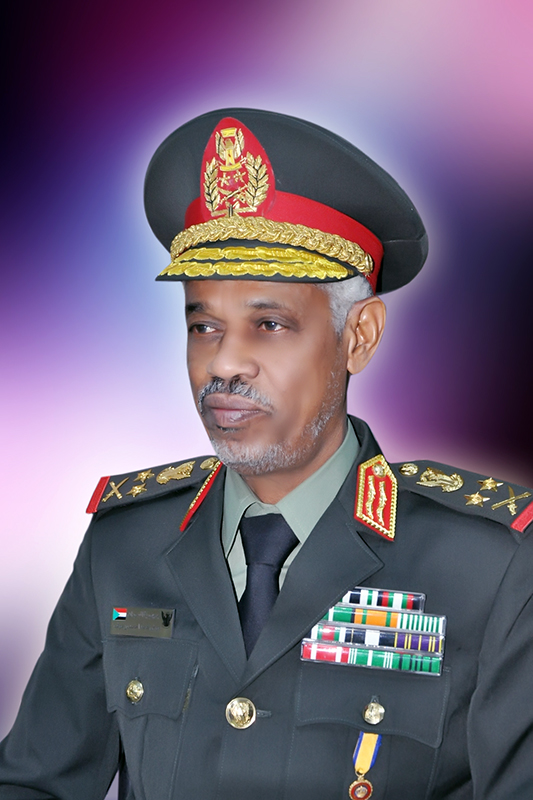 The transitional constitution of 2005, after South Sudan separated itself would be suspended.

He announced a state of emergency over the next three months and a curfew for the next month which prohibits citizens from being outside between 10 PM and 4 AM.

He also announced the closure of the airspace and crossings for 24 hours, in addition to resolving the institution of the presidency and the Council of Ministers and the Parliament and the Council of State and State governments and their legislative councils and assigning the governors to carry out tasks and assigning the undersecretaries of ministries to run the work.

The military’s statement assured that all courts and embassies would continue working, affirming the Military Council ‘s commitment to preserve public life without exclusion.

“The Army affirmed its keenness to pave the way for peaceful handling of power, building of political parties, holding of a free and transparent elections in the end of the transitional period and issuance of the permanent constitution.”

General Ibn Auf said that the higher security committee and the Armed Forces and its other components have assumed full responsibility for changing the entire system for a transitional period of two years, in which the Armed Forces will be the main and a limited representation of the components of that committee.

General Ibn Auf, like former President al-Bashir, had been accused of perpetrating war crimes in Sudan’s western region of Darfur. He is also a confidant of al-Bashir. On February 24th, Ibn Auf was sworn in as first vice president. 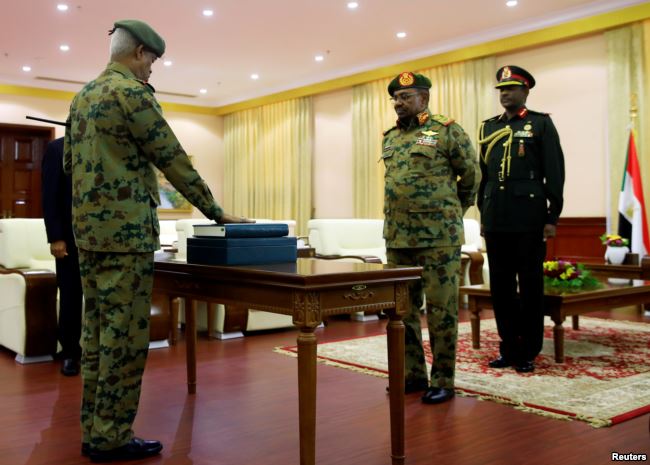 “We do not replace a thief with a thief,” protesters chanted. “We don’t want the same guy!” shouted others. Within hours, another taunt at the regime was circulating online: “It fell once, it can fall again!”

“What has been just stated is for us a coup, and it is not acceptable,” said Sara Abdelgalil, a spokeswoman for the Sudanese Professionals Association, which has been organizing the protests. “They are recycling the faces, and this will return us to where we have been.”

“We insist on a civil government,” said Abdelgalil, the protest organizer, adding that the demonstrations would continue “until there is a complete stepdown of the whole regime.”

In Addis Ababa, Ethiopia, the chairperson of the African Union Commission, Moussa Faki Mahamat, said “the military takeover is not the appropriate response to the challenges facing Sudan.” He urged all parties to remain calm and exercise restraint.

The United Nations Security Council is due to hold closed-door talks about the Sudan situation on Friday. Britain’s deputy ambassador to the U.N., Jonathan Allen, condemned the military’s transition plan as inadequate.

“We need to see much faster transition. We need to see civilian rule now. That’s what the protesters have been calling for and that is what we need to do,” Allen said.

Naturally, she wasn’t pleased with the outcome of the Bashir ousting as well.

A photograph of Alaa Salah, taken by Lana Hago became viral as a sign of the protests and turned the “woman in the white tobe” into a sort of leader of the protests.

Hind Makki, a Sudanese American interfaith and racism educator in Chicago, provided some insight into it.

Her earrings are the gold moons of traditional bridal jewelry (Sudanese, like many Arabic speakers, often use moon-based metaphors to describe feminine beauty)

Sudanese everywhere are referring to female protestors as “Kandaka,” which is the title given to the Nubian queens of ancient Sudan whose gift to their descendents is a legacy of empowered women who fight hard for their country and their rights. ✊?

Alaa Salah’s entire outfit appears to be “designed” to appease the Sudanese protesters and turn her into a sort of key-piece at the demonstrations.

According to Makki, Salah simply wanted to make a “symbolic statement.” And she did, protesters and users online are calling her a “Kandaka,” a Nubian queen.

Taking into account a detailed work with the public image, it’s quite possible and likely that there is a team of experts behind this grassroots, “impromptu” leader.

#AlaaSalah has been called a 'kandaka' – a term used for ancient #Nubian queens
Draped in a traditional white thobe, singing for #revolution the poem "thowra" & surrounded by protesters became a symbol of Sudan’s protest movement.#Sudan_Uprising #Women ✊?pic.twitter.com/UP9vEUOsz0

We do not replace a thief with a thief,” protesters chanted. “We don’t want the same guy!” shouted others. Within hours, another taunt at the regime was circulating online: “It fell once, it can fall again!”

YEAH IF LEADERS ARE NO GOOD….OVERTHROW THEM & DRAG’M TO COURT…HANG THEM HIGH….PUPPETICIANS SHOULD BE THERE FOR THE PEOPLE…NOT THE OTHER WAY AROUND…

Namibia,South Africa and Zimbabwe,Malawi need regime change.Because this regime rule others on tribal lines and perform ethnic oppression.Opression is base on color and tribe.

This is a Zionist funded (((opposition))) trying to overthrow the Sudanese army because of their anti-Israel stance. Even President Basher said that he received calls telling him to open up to Israel and the protestors will quiet down but he ignored them and remained defiant. If you support these garbage protestors then youre supporting the same people that want to overthrow President Assad.