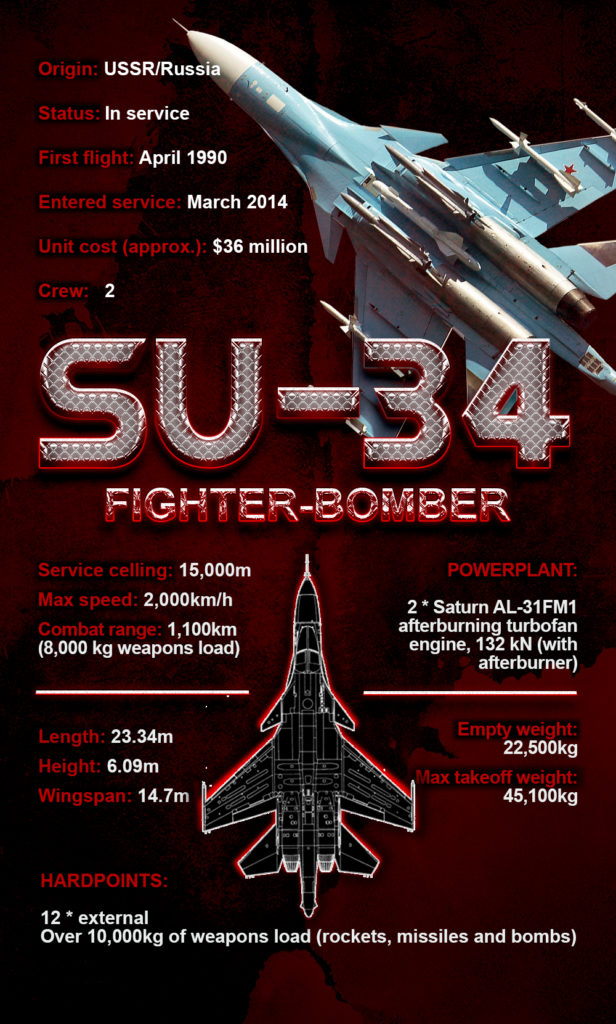 The Su-34 is a Soviet-origin Russian all-weather supersonic medium-range fighter-bomber. It was designed by the Sukhoi Design Bureau for the Soviet Air Force and made a first flight in 1990. The Su-34 entered service with the Russian Armed Forces in 2014.

If Iran were to buy a 100, or more, Israel will go apeshit. Because these have a very long range. Too long for Israeli comfort.

Genuine question… Why would I want a Su-34 over say a Su-30SM? Both are 2 seat fighter/bombers, the Su-30 would appear to be that better warplane though. If I’m wrong on this, I’d like to know why? My thinking here would be the Su-34 would be better platform in the Russian Naval Aviation service, the Su-30 better for the Russian Air Force.

Thanks for the reply… From what I understand, the Su-34 was supposed to succeed the Su-24 and replace in part the Tu-22M3… Fair enough with regards the ‘Fencer’ but can’t see how so with the ‘Backfire’.

The 34 and 30 is two different platforms for two different jobs. As you said, the 34 is going to replace the 24, wich, among some others, did three rather specialised jobs.: Deep penetration of highly protected airspaces, a jamming platform and a recce platform.

A 30 is just not capable of doing these jobs to the same level or better. The 34 is and have “plenty” of space to allow further upgrades and avionics. The 30 is a fighter/interceptor with air to ground capabilitys. The same reason why there is two versions of the Tornado (ADV and IDS)

I agree that its hard to see how the Su-34 can replace the Tu-22, they again, is two different platform with their own unique jobs to perform. But as weapons becomes smaller, lighter, more powerfull and with longer legs, its not impossible. And yes, the Yak-30 or Su-25 is a dedicated antiarmour/CAS airplane, like the A-10.

If you are interested in Soviet/Russian aviation, i recommend the books in the “Famouse Russian Aircraft” series by Yefim Gordon and Dmitriy Kommisarrov and the books by Piotr Butowski.

Ruskies think strategically and sell the Persians the SU-35/34/57 pronto……..