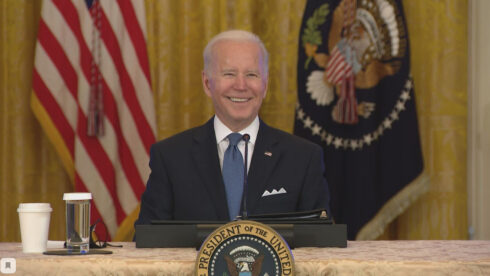 Just days after President Biden was caught on hot mic calling a reporter’s question over the Ukraine conflict “stupid,” the US Commander-in-Chief downplayed a question over one of, if not THE most important worry for Americans right now – inflation.

“Do you think inflation is a political liability ahead of the midterms?” asked Fox News‘ Peter Doocy as Biden was wrapping up a press conference for the White House’s Competition Council.

“No. It’s a great asset. More inflation. What a stupid son of a bitch,” replied Biden.

WATCH: Joe Biden calls a reporter asking about inflation a “stupid son of a bitch.” pic.twitter.com/1QiJzZs6HY

Biden’s hot-mic moment comes as nearly 90% of Americans in a November poll say they’re worried about inflation – which has of course intensified since then.

Video of @POTUS responding to @pdoocy and calling him “a stupid son-of-a-bitch.” https://t.co/J2jSuCURyj

Monday’s outburst follows another hot-mic moment last week, when Biden was caught muttering “what a stupid question,” after Fox News‘ Jacqui Heinrich asked him “Why are you waiting on [Russian President Vladimir] Putin to make the first move, sir?” in regards to Ukarine.

Earlier last week Biden sparked outrage in Ukraine after he suggested that a “minor incursion” by Russia would merit a different response than a full-scale invasion.

On Friday, White House spox Jen Psaki was asked: “Is the president aware that he was caught on a hot mic yesterday? Why does he appear to be dismissing the idea of proactive deterrence?” to which Psaki responded: “Well, the president certainly does not dismiss that idea, considering he has taken a lot of steps including supporting and approving the several sanctions that were put out by the Treasury Department just a couple of days ago.”

In September, Biden once again criticized the American press, saying that the Indian press is “better behaved” with its questions.

Remember when this parasite said this about the Serbians; They are all rapists and baby killers. Paraphrasing. He is a vile criminal who makes Al Capone look like a saint.

Sewerbians are indeed rapist, murderous subhuman mongrels; having met unfortunate numbers of them in Australia and during the period I was employed as a sailor.

They ought to be purged Jasenovac style, males being castrated and females being gang-raped till their backs break, ALL of them regardless of age.

The guy who falls up steps and barfs in his pants calls someone else stupid!!