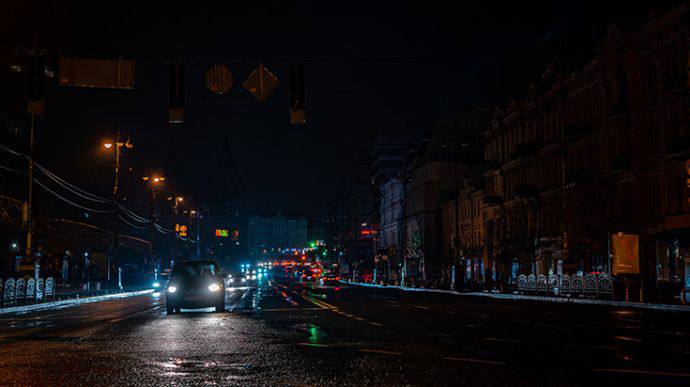 Active shootings are reported in the Ukrainian capital of Kiev, which has been plunged into darkness as a result of Russian strikes on energy infrastructure.

Since February 2022, various gangs became active in Kiev, some robbing residents, some banks and stores. The previous peak of criminal gang activity was in March-April 2022. At that time, the Russian military was near Kiev, causing panic among some citizens and hope for looting amidst the chaos for others.

Today, the story seems to be repeated. The situation is aggravated by the impoverishment of the population, a sense of hopelessness, and the expectation of freezing weather in a de-energized city.

Local sources are confused, saying that the active shooting is probably related to the fact that the territorial defense forces are trying to arrest someone. However, they are said that the shooting was heard in several different districts of the city.

In the world today, the only thing scarier than local war can be reactive social disorder, whether it be Libya, Korea, Haiti, or Ukraine. The neoliberal puppeteers of the West were counting on this tool to destroy the hated geopolitical entity in the center of Eurasia, but in practice it turned out that they have very little time left to save the Kiev regime itself.

Escalation In Donbass – Many Civilian Casualties

Ukraine is once again another example of what happens to a nation once it gets taken over by the anglo-zionist criminal cabal. It is almost guaranteed that within a few years of the anglo-zionist takeover of a government either by blackmail or by a bloody coup as in the case of Ukraine, the country will soon after descend into chaos, civil war, sectarian division, turmoil and despair. The truth is that a much darker and horrific fate awaited the millions of people of Ukraine were it not for Russia’s intervention and subsequent purging of this cabal of degenerate parasites that took over the entire nation from the government to the military and the entire school curriculum and who quickly established an absolute dictatorship of news and information to control and manipulate their new subordinates into initiating a sectarian civil war against ethnic Russians.

This is just the beginning, as it gets colder and Russia keeps turning Ukraine’s energy grid off the meaner and stronger will pray on the weak. Welcome to the jungle, lets get ready to rumble.

This is what happens when your country is run by jews.

The pattern is clear:

All criminal hellholes run by joos.

US and UK have been planning to destroys Russia Ukraine EU and China, even EU because EU is competitor of US and UK trade.

6 millions kebabs killed each other. Not enough.

so finally they get what they deserve. They were so secure of the victory and the support of the West, secure of the weakness of Russia. They are paying for their mistake. Hope our protest will make our governments to stop soonest supporting the puppet in Kiev and his stupid naive forth-world population

This will only anger the Ukrainian civilians more. There will be more desire to go to the frontlines and fight the Russians till the death. The only thing that will happen when you destroy the energy infrastructure is that Ukrainian civilians will become refugees.

We need more refugees in France to feed them and to make things moving.

This was not the case in Libya, Iraq, Serbia among others. The Ukrainians do not necessarily support either side in the end. They support the identity. Many call their government corrupt. The Russians corrupt too. In the end, if the fighting stops, that’s what they care for the most. Look at the Germans. Bred for decades on being hellbent to fight a war against all others. The moment the cities started to crumble and the power was gone and hope for victory disappeared, resistance slowed and people turned on their government. The Russians won’t be seen as liberators, but will be seen as just another occupying force and master for years to come. Such is the way. The fact though is that if the occupation by Russia guarantees food, electricity and water onces the fighting ends, and there is security and safety for the average citizens then this is an occupation that many would prefer to conflict.

USA is a shithole, EU is becoming one
Reply to  CentralAsianStudies

The msin difference is Ukrainians speak Russian better than Ukrainian in most cases 🤣 while Germans did not speak the languages of any of their occupiers.

Odessa was established by a Russian Tsar, remember the name? 🙃

Hahahahaaaa you moron, If many more ukro refugees flee west, who will work, service and produce anything in ukropistan? You can not win a war without money, infrastructure, a stabile economy and energy supplies.

Everyone knows it's the Jews.
Reply to  Fedy Klay

I said on the 25th that if Zelesnky wanted to be the greatest man on earth, he should have surrendered on that day and met the terms of the Russians. All of this could have been avoided if he gave up Crimea and the Donbas. Now Ukraine will give up all land east of the Dneiper, while the people live in poverty. Talk about failed government and decision making.

Aunt Polly
Reply to  Everyone knows it's the Jews.

He only wants his next high.

Vlad the Sissy from Rumania

So all the cunts and alpha cucks are getting what they deserve.

USA is a shithole, EU is becoming one
Reply to  ArmenianCekko

It will change the war on the frontlines: imagine a back of the front having to carry even drinking water for hundreds of miles… No hygiene in the reserve, no heat, back to the days of Mongol Empire without Mongols and their herds… Bows and arrows needed 🤫

Last edited 3 months ago by USA is a shithole, EU is becoming one
22
Reply

Lol you total moron. No water, gas and electricity, than the whole economy will collapse and if the families go West, the morale of theyr man on the Front will Collapse fully.

USA is a shithole, EU is becoming one
Reply to  TomB.

Men would rather join Russian side.

Russia now systematically taking down the Ukrotard regime piece by piece, upping up the pain dial and turning the country into a living hell-hole for whoever is left!!!

I wanna hear many shooting in Kiev. Specially towards the presidential office. I’m loving it.

“Over 15,000 people volunteer for Russia’s special operation in Ukraine” — General Staff of the Russian Federation

London UK is fast becoming an international crime capital, and inactive street lights this coming winter will result in a hunting ground for indigenous and immigrant gangs alike.

Kiev is just another victim of ‘Khaz ar ‘ hatred of the goyim.

Hey nigger, what does the post have to do with monkeys in Africa?

Sounds no different from downtown Philadelphia.

Couldn’t happen to a bigger bunch of dumb shits. These Ukrainians have to be among the dumbest people on earth.

The 100% best thing for Kiev is for the city to start eating itself, and for everyone in that city to start actively hating cocainsky.

Thx for the good laughs 😆😆😆 – russian BS propaganda is hilarious and now imagine the few idiots believing this crap 😆😆😆 – Fortunately, more and more people consider statements from Russia as what they are: laughable lies 😉

You’d rather look at the main streamed media in the States? Read Yahoo – its right up your A lley.