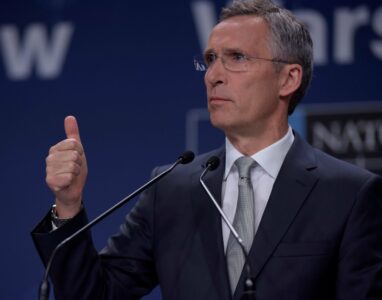 However, NATO plans to use this as an excuse to prolong the conflict by sending more air defense systems to Ukraine, instead of searching for a diplomatic solution.

On November 29, the foreign ministers of NATO member countries met in Bucharest for a conference about the current issues involving the organization. One of the points commented on the occasion, including by the head of NATO, was the military impact of the air attacks that have been recently promoted by Moscow’s forces against the Ukraine’s side. In practice, the assertions at the summit contradicted many narratives previously spread by media and NATO itself about a possible “Ukrainian victory”.

NATO Secretary General Jens Stoltenberg said in a press conference after the alliance ministers’ summit that the latest high-intensity Russian air strikes caused immense damage to Ukrainian forces. According to him, this meeting between representatives of NATO states was necessary and timely to discuss new forms of aid to Kiev and to advance new countermeasures in view of the losses that Ukraine has suffered on the battlefield.

“We need to realize that there are enormous effects of the attacks (…) These attacks have caused significant damage (…) I think we all have seen these pictures taken from satellites, where you see Europe in light, and then you see Ukraine dark, and that reflects the enormous consequences. So there’s a huge task to rebuild all of this (…) One of the important reasons why this meeting today [in Bucharest] is so important and timely, is that this provides us with the platform to mobilize further support to step up even more, and also for [Ukrainian Foreign] Minister Kuleba to meet all his colleagues in NATO and then to address those urgent needs. And I’m confident that Minister Kuleba will raise also the need for stepping up further when it comes to rebuilding their power infrastructure”, he said to journalists.

The secretary also stated that new efforts are needed on the part of the Atlantic alliance to continue helping Kiev and strengthening its defense capacity, since the recent maneuvers have enormously harmed the Ukrainian side. The first measure in response to Russian attacks would be to send new air defense systems to Ukraine. The objective is to increase the Ukrainian ability to neutralize Russian missiles and drones, preventing them from reaching their targets, mainly those related to critical infrastructure. In this sense, he also emphasized that Western countries need to help Ukraine rebuild its damaged infrastructure.

“Here in Bucharest, at the foreign ministerial meeting, the message from all Allies will be that we need to do more. Both to help Ukraine repair the destroyed critical infrastructure, including the power and gas grid, but also, to of course address the attacks itself, by providing more air defense systems (…) This is partly providing more air defense weapons systems, but also of course to ensuring that those systems that we have already provided – and many of them are actually a modern, NATO standard air defense system, including NASAMS and others, that they are functioning. Meaning that we need to provide spare parts and we need to provide ammunition”, he added.

It is curious how often Westerners contradict themselves in their narratives. According to western media outlets, Ukraine is winning the conflict and inflicting a lot of damage on the Russian side. On the other hand, Moscow would be launching heavy attacks against civilian targets, without success on the battlefield. However, the NATO meeting denied it admitted the irrefutable fact: Russian attacks are strategically aimed at military and infrastructure targets, destroying the combat logistics of enemy troops – therefore, Kiev is losing, although they have not yet clearly admitted this.

The media spreads lies about the conflict with only one aim: to make the public believe in the possibility of a Ukrainian victory and to encourage its leaders to send more aid. Now that it has been proven that even with Western assistance, Kiev is not succeeding on the battlefield, the right thing to do would be, instead of expanding, reducing aid, considering Ukraine a militarily lost battle, thus seeking a peaceful solution. However, NATO proposes precisely the opposite: to boost military interventionism by sending new defense systems. In other words, the alliance once again stresses that it wants to prolong the conflict as much as possible and that it will fight “until the last Ukrainian” – or foreign mercenary.

With this, NATO makes it clear that it is at war with Russia. It is not a question of mere “aid” to Kiev, but of active participation in a large-scale military confrontation against an enemy country. In this relationship between NATO and Russia, the Ukrainian neo-Nazi regime is just a proxy, without any sovereignty, willing to obey all Western commands and unable to decide when to stop fighting.

Stuntenberg would look great in a Generaloberst uniform. He has the steely look!

Stoltenberg would look great as a clown as well

I think of him as Doltenberg. He acts like a yappy lapdog, making silly yapping noises to get a treat from its master.

These people are crazy. What is wrong with pressuring Ukraine to give up the 5 oblasts and not allowing Ukraine in Nato? How hard is that? But instead, millions suffer because of the obstinate nature of the scumbag rulers.

NATO can’t admit defeat, neither can Russia , so it will go on until the world will burn .

2 sides can’t be losers, that falls on NATO alone. What has Russia lost, they’ve gained an area larger than the UK, and 6 million loyal citizens. The EU will get 10 million Ukrainians looking for heat and shelter from the very people who paid and supported Ukraines murderous attacks on their own citizens since 2014.

well NATO hopes ukr will push russians back, even to take Crimea. Russia hopes to crush uks spirit and will to fight and to determine population to overthrow zelensky . We will see who can prevail. My money is on russia , they are a lot more acustomed to hardships than the EU fucks . On the other hand , US has almost unlimited resources … so who knows?

Principles are principles. Never bow for an axis of evils when you stand for freedom and peace. The millions dead is worth it because its for freedom.

wondering if you would think the same if its you and your fammily that “dies for freedom” :) dumb fuck

” The millions dead is worth it because its for freedom. ”

Stoltenberg will eventually have one Ukrainian living in the dark with a lot of weapons and many wealthy bosses.

” Stoltenberg will eventually have one Ukrainian living in the dark with a lot of weapons and many wealthy bosses. ” kk1.

Funnily enough, the UK is destroying the UK National Health Service (NHS) in much the same way.

It’s all part of the Great Reset agenda and the phony UN Climate Change agenda. LOL

I guess a lot of us foresaw the grisly prospect of Ukraine getting destroyed while Western leaders kick the can down the road in the hope that something will come up.

Sadly, the BBC et al treated this from the outset as a war with Russia, and entitled themselves to peddle blatant lies and propaganda as if our own countries were under imminent threat of annihiliation.

And the reach of the BBC on the home audience is overwhelming in shaping public opinion.

We are in the minority.

they are kickin the can because they are laundering money and making a fortune.

I remember whe US politicians and its military cheerefuly bragged about sending Iraq back to the stone age. Now the shoe is on the other foot. Bravo for Putin, keep up the work mr. president.

if you wanted to collapse military, financial systems of the West, what would you do differently?

Shut off all gas immediately followed by electricity, destroy the roads, railroad, and air strips and Kill Zelensky. That would have been week #1.

Or, in english the ukranian army is getting blown to shit, billions in foreign aid or no

Where all the Nazi trolls at?

They can’t get online, electricity shortages and all that, lol.

Send NATO HQs some Kinzhals, that will send the Yanks running for the US, and leave Stoltenburg burning in flames. Practise for when that Nasty b’stard goes to Hell.

Interesting. If SF would be reliable info source.

Maybe you should stick with your Guardian and BeeBeeFucking C!

Haha gaslighting the world not working out NATO. Phone up up the media propagandists and dial it back.

the Russians made a mistake. They should have carried out the bombardments on the electrical productions that they are doing now, immediately from the beginning of the conflict.

Typical double think: When it suits them, Russia is either weak, backwards and at the edge of collapse, or strong, advanced and needs to be stopped before it takes over Europe.

Imagine it! NATO is stupid enough to appoint a mouth piece who doesn’t know how to lie. They honestly don’t deserve 50 cents, what a bucket of idiots.

I have heard him say same thing about Syria, Afghanistan, Iraq and Libya. We need to help rebuild…wait…hmm…nope. Second, why is Stoltenberg and Nato so “hot” on helping? Ukraine is not in Nato and not in EU. Did Natos plan backfire? =)

What I find ironic, is the fact that NATO Leaders come from non-nuclear nations or used to be nuclear peace protesters. Yet, they are also the biggest cheerleaders for a thermo-nuclear war, with no basic understanding of mutually assured destruction. Stoltenberg, a legend in his own ego and where would he be without the support of the Atlantic Council.

Why is Crimea so important to them, besides wanting to kick the Russians out of their warm water base and move NATO in? Why is non-NATO nation Ukraine so important to them? Then you have Burisma, and how many Dems and their families are involved in Burisma and why is Burisma linked to the Atlantic Council and also the ‘3 Seas Initiative’?

this is jensholm 25 years ago prior to senility

when blinken call I ask for romantic date

You know these two Muppets are on US payroll but honestly the script seems to have been retrieved from WWF discarded rubbish. Not even a B movie, more a Z, where’s Zelensky?

You know such dribble from these two may seem credible if your audience is the US populous, The Good Guys Yeah USA USA USA, Bruce Fucking Willis and the Bad Guys; Gonorrhea, no silly that’s not a person, Oh er yeah, Putin is EvoL, Putin eats your babies, We have banned Russia Today, bad blah blah blah Russians.

I listen to Lavrov on RT this morning, so articulate, intelligent, he conveys the geopolitical picture like an oil paint embracing the canvass and then you switch back to these two……WTF???