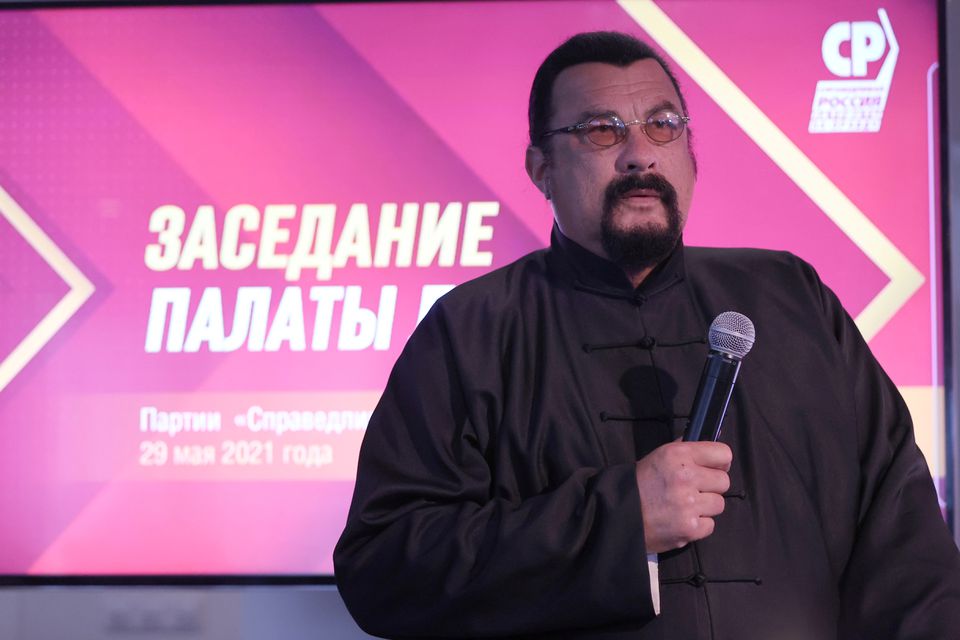 On May 29th, Hollywood “legend” Steven Seagal has opted into a career change.

He joined a Russian political party.

It was formed earlier in 2021, when three leftist parties, all of which support Putin, merged into one.

In November 2016, Segal was granted Russian citizenship. In August of 2018, Moscow’s Foreign Ministry appointed him to the unpaid position of “special representative for Russian-US humanitarian ties.”

He lamented the lack of ability, even in Russia, to arrest people for no apparent reason, just fining them for breaking the laws.

“Without being able to arrest people, when we just fine them, they are probably making more money of the production of the things that are defiling the environment,” said in his welcome speech at a party event.

The party controls a faction in the lower house of the Russian parliament and plans to take part in a parliamentary election in September.

The US-born Seagal is known for his action movies of questionable quality, and his alleged martial arts prowess. Russian President Vladimir Putin seems fond of him and martials art, and as such they, apparently, have become “best friends.”

In 2018, Russia tasked Seagal with improving humanitarian ties with the United States at a time when relations between the two countries have deteriorated to their worst level since the Cold War.

As a Russian representative, Seagal visited Venezuela earlier in May and presented a samurai sword to Venezuelan President Nicolas Maduro.

Previously, he was a member of the For Truth party (on February 22 it merged with Fair Russia and Patriots of Russia).

According to the actor, his priorities will be the fight against environmental crimes and the protection of Lake Baikal. Seagal also called for the demilitarization of outer space, stressing that he is extremely concerned about this problem.

Answering the TASS question whether he considers himself a socialist, Sеаgal noted that A Just Russia – For Truth is not a socialist party “in the Soviet sense of the word.”

“This is a different party, it is different. Because people have quite open views on what is good, what is good for the country, for the people. And this does not correspond at all with the outdated Soviet concepts,” he is sure.

He likely will not run for a seat in Russian parliament due to his American citizenship.

Loved his movies and his unabashed approach to using anger as a tool to put down evil. I wish him well. US is a bad place now for people wanting to do good.

Yes quite a convincing FTM it was back in the day.

Good for him,real fighter not just anm actor,only trolls who can’t fight for shit say he can’t fight, hed snap both their wrists in a jiffy too,i ought to know see I factually knock out fascist teeth,no sht! If be of any boasting let it be of truth,cia/soros trolls cry with rage,but there is no hope for lgbtq/soros.

Yet another jew infiltrating the Russian power structure.

This is exactly what Russia needs, more posers?

the kippah clan loves this guys for a reason

So in Russia a foreigner could arrive, get citizenship, and then proceed to meddle in their politics in under 10 years ? Havent the Russians learned anything from the collapsing political systems in the west ? In a sane system no first generation immigrant should be allowed to meddle / or participate in the host nations politics. Basic logic which Russia seems to have missing in this regard.

Wasn’t he Reagan’s bodyguard for a while before making movies?

One of Reagan’s then advisors, I forget her name, is applying for Russian citizenship now as well. It looks like even Reaganites more prefer Russia.

By the way, this article was apparently written by two different people with opposite agendas.